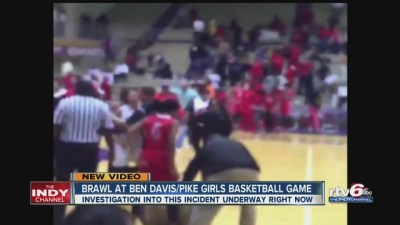 Unfortunate circumstances prompt unpleasant consequences.  That’s what happened earlier this week when IHSAA commissioner Bobby Cox decided it was necessary to cancel the remainder of the season for the Ben Davis and Pike high school girls basketball teams because they indulged in a brawl during their game Saturday afternoon.

A brawl erupted among the players during the fourth quarter of their game last weekend, which was declared over at that point.  Parents, fans, and others rushed the court, and fortunately no one was seriously hurt.

A similar circumstance occurred last year at Griffith High School where all hell broke loose during a boys game against Hammond.  Cox canceled seasons then too, but a judge ruled against the IHSAA and the teams were allowed to play in the state tournament.

There continues to be great debate over the severity of the consequences for the Pike and Ben Davis programs.  Here are 10 arguments in favor of Cox wielding a swift and heavy hammer:

10 – Needs of the many outweigh the needs of the few.  Cox doesn’t have the disciplinary luxury to mete out penalties with exact equanimity for every infraction among the approximately 160,000 athletes he oversees.  In foreign policy and athletics, the serious threat of a nuclear option serves as a serious disincentive – it either causes fear based compliance, a logical and safe response, or both.

9 – For change to occur, the pain of change must be outweighed by the pain of staying the same.  The cancelation of a season has brought great discomfort to the Ben Davis and Pike athletic departments, and the result will be a change in the actions of the teams at those schools because they now understand the consequence is not worth the act.  The other 406 IHSAA member schools will also take note, and team meetings will take place where unacceptable and dangerous behavior will be discussed.  Individual suspensions would not have induced the same discomfort or reflection.

8 – Adversity is a great teacher.  There will be those Ben Davis and Pike players who decide to answer Cox by working with more focus to improve enough that Cox is forced to present her team with state championship medals next season.  It’s likely some may drift from basketball because they feel the world is against them.  A life is defined in large part by how each of us responds to adversity.  High school is a great place to be presented with the opportunity to declare ourselves tough enough to succeed despite obstacles.

7 – Bobby Cox likes to sleep at night.  If Cox neglected to act swiftly and severely, and another brawl followed with dire results – lifelong effects from injuries or death – Cox would never enjoy another good night sleep in his life.  A month of hooping for two teams is a small price to pay to ensure compliance – and the resulting eight hours of rest every night.

6 – Programs not built on a foundation of education and fair play do not deserve the privilege to compete.  There is no law guaranteeing the rights of a student or team to compete in high school athletics, so when a disregard for the culture of safe competition is shown by brawling, the response must communicate that privilege can be lost.

5 – There are 400+ high schools in Indiana who need a reminder.  Knowing that Cox isn’t screwing around will get the attention of every other Indiana team in every other sport.  It might not be entirely fair for those who didn’t participate in the brawl, but this disincentive might save another two or four teams from making the same mistake.

4 – Season cancelation mirrors real life consequences.  When an employee at a company screws up, he or she should be fired to protect the company’s bottom line so other employees keep their gigs.  When the majority of employees act against the interest of the company, bankruptcy is declared, buildings are sold or shuttered, and employees (even those who were competent) are scattered to the wind.  This brawl mirrors the latter scenario.

3 – Coaches need to understand need to maintain order.  Nothing serves as a more profound consequence than the cancelation of a season for the players and coaches.  Knowing that a brawl will be met with quick and certain plug pulling will cause coaches to monitor the emotional tenor of their rosters more closely, and may result in intervention for those players who live on the edge between competitive zeal and real violence.

2 – Team punishment for multiple individual infractions is fair.  While not everyone playing for Ben Davis and Pike participated in the riot, a season cancelation is a better and ultimately more fair option than declaring nine of 12 players ineligible and leaving the other three noncompetitive because they would be joined by JV team members.

1 – More serious violence is a given.  Players fight, parents protect.  That’s the way parenting works, and at some point a parent is going to be armed.  The next brawl might not begin with tempers flaring, and end with fists flying and hair being pulled.  There could be shots fired, and the consequence won’t be a suspension but a funeral.  Doing everything necessary to ensure that escalation does not take place is not only Cox’s job, but his moral mandate.