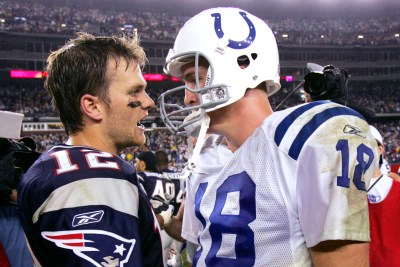 Peyton Manning and Tom Brady have been this generation’s best known NFL players and rivals.

Sunday afternoon, the two biggest NFL stars of the last 20 years will match up for the 17th and (likely) final time in the AFC Championship.

Peyton Manning and Tom Brady are two of the best quarterbacks in NFL history, and like all great rivals, matchups between the great leaders define their careers.  It’s only fitting that a Super Bowl berth will be on the line the last time they share the field as warriors.

Ali had Frazier, Bird had Magic, Palmer had Nicklaus, and Chamberlain had Russell.  And Sunday in Denver, Manning vs. Brady will slip from the current to the past like all those other great rivalries.

These lists are almost always the top 10, but in this case I make an exception as finding something to extoll among the 11 games Brady won for the Patriots a “favorite” or “best” was too miserable an exercise to undertake.  I include three Brady wins because I’m a fair guy and during two of them I had a really good time for other reasons.

Here are my favorite eight moments or games that showed these two aging warriors at their best:

8 – January 18, 2004 – Postseason Round 1 between Manning & Brady.  This was a terrible game that the Colts were never really in.  Adam Vinatieri booted five field goals for the Pats, and Manning was sacked four times.  This game is only on the list because I had a great time at the Broad Ripple Ale House watching with some new friends.  One of them, a girl we called “Shuckey” cheered for the Patriots because she loathed domed stadiums and teams that played in them.  As the Pats pulled away, I made sure my giant head totally blocked the screen so she couldn’t watch and taunt.  Pats win 24-14.

7 – November 7, 2005 – Colts win big on Monday Night.  Colts win 40-21 as their only punt is to end their final drive of the game.  Manning threw well, completing 28-37 for 321 and 3 TDs.  The only other drive to not end in a score for the Colts was due to Manning’s lone interception of the night.  Edgerrin James dominated the game with 104 yards on a workhorse 34 carries.  This was the first win for Manning against Brady after six straight losses.  Colts dominate 40-21.

6 – November 5, 2006 – No need for a Colts comeback here in one of the worst games of Brady’s career.  Brady was terrible, throwing four picks as the Colts never trailed in this 27-20 win.  Cato June caught two of those errant throws.  It’s always fun watching a guy who has it all look very ordinary.  Colts capitalize on Brady’s mediocrity 27-20.

5 – January 19, 2014 – Manning punches ticket for a Broncos Super Bowl appearance.  Manning was brilliant in this game as the Broncos destroyed the Pats in Denver.  He completed 32-43 for 400 yards and 2 TDs.  This game was never in doubt as the Broncos built a 20-point lead on their way to a 26-16 win.  The Super Bowl wasn’t nearly as much fun for Manning as the snap on the first play from scrimmage sailed over his head and the Broncos lost to the Seahawks 43-8.  This is the only postseason game between Manning and Brady when Peyton’s passer rating topped 80.  Broncos win 26-16.

4 – November 21, 2010 – Manning’s magic falls short.  This was the comeback that wasn’t in the final game between Manning as a Colt and Brady.  Behind 31-28 in Foxborough, with a tie almost assured late in the 4th quarter, Manning tried to give the Colts the lead with a pass to Pierre Garcon.  James Sanders grabbed it for Manning’s third pick of the day.  No one knew then that this rivalry would never look the same as Manning’s time with the Colts would end in less than two months.  Pats win finale 31-28.

3 – November 4, 2007 – Brady bounces back.  With 9:50 left in the game, a Manning sneak gave the 7-0 Colts a 20-10 lead over the 8-0 Patriots.  All was right with the world inside the RCA Dome as I watched in Jim Irsay’s suite sitting between Stephen Stills and Rob Lowe.  I was asked if I wanted to head down to the field as a guest of Jim Irsay.  Once there, all hell broke lose and the Patriots, behind a laser sharp Brady, sliced through a tired Colts defense for two late touchdowns, stealing victory from the jaws of defeat on their way to an undefeated regular season.  Pats win 24-20.

2 – November 15, 2009 – Belichick blinks and Bullitt makes Pats pay.  Down 31-14 early in the fourth quarter and by 13 with 4:12 to play, Manning authored a classic comeback.  Peyton was 6-8 for 60 yards (plus another 31 yards on a pass interference call on current Colts Darius Butler).  This game will be forever remembered for Belichick’s call to go for it on fourth-and-two from the Pats own 28.  Brady threw in the right flat to Kevin Faulk, who was stopped just short of the marker by Colts DB Melvin Bullitt.  Colts give Belichick a haunting 35-34 loss.

1 – January 21, 2007 – Manning leads comeback to win AFC Championship.  Adam Vinatieri knocked a 26-yard field goal through the uprights at the RCA Dome in the AFC Championship to cut the Pats lead to 21-6 at halftime.  The Colts outscored the Pats 32-13 in the second half fueled by touchdowns by unlikely Colts Jeff Saturday and Dan Klecko.  This win sent Manning to his first of three Super Bowls, and his only world championship.  Colts win 38-34.

The cast for Sunday’s AFC Championship has two headliners sharing a stage for the final time.  We’ll see if the game can match the hype or pedigree of the previous 16 battles.