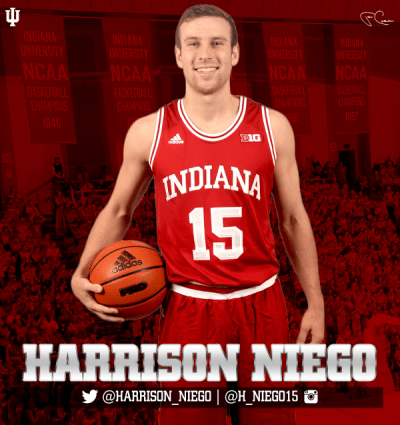 Harrison Niego was a hell of a good high school basketball player in Western Springs, IL. Now, if you watch closely, you see him play for the love of the game at Indiana.

You see them every game at the end of the bench, cheering for their teammates.  They enthusiastically greet the starters and key subs every timeout.

Every once in awhile – a little bit more often recently as IU has won three of its last four by at least 25 points – they get a couple of minutes of playing time.

They are the guys who signal the game is well in hand when they report to the scorer’s table, and give fans an opportunity to beat traffic by making an early escape from Assembly Hall.

None get scholarship money, a stipend for expenses, nor the faintest hope of a future gig in the NBA playing for millions of dollars.  They are the walk-ons – young men who work tirelessly for the love of the game and nothing more.

At Indiana, Ryan Burton, Harrison Niego, Jackson Tharp, and Quentin Taylor are the walk-ons.  Burton and Niego get a little run with the game still on the line, but most come off the bench the last minute or two of a game that has gotten out of hand.  They get the mop up minutes, and none for the glory of old IU.

Here are 10 reasons to keep your seats at the end of blowouts to watch these hard working young men play a little bit:

10 – Walking on is truly a 60+ hour a week commitment without compensation.  The thing with walk-ons is that they either love the work or they don’t stick around very long.  They are not priorities for the coaches in the same way the scholarship players are, and that’s okay because very few walk-ons ever impact a coach’s ability to hang onto his job.  Remember that old Smith Barney commercial that said, “The reward for hard work is more hard work!”?  That echoes in the heads of walk-ons.

9 – Playing time is cherished.  Some scholarship players might occasionally take for granted the opportunity to play in front of fans and score points.  Walk-ons cherish every chance to get on the court in front of more than coaches and managers.

8 – Walk-ons exist to help the starters improve.  The purpose of including walk-ons is to ensure fresh meat for the starters to attack.  Good walk-ons invest more time and energy trying to help scholarship players sharpen skills and improve discipline than working on their own skills.  They are selfless, team-oriented lovers of basketball.

7 – Injuries are just as real for walk-ons in practice.  Concussions, sprains, pulls, and bumps, bruises, and aches hurt just as much for walk-ons, and the sympathy fans feel for starters like James Blackmon Jr. does not extend to walk-ons because no one notices when they sit out games.  That’s what they are supposed to do, so battles through injuries to get back on the court go completely unnoticed.

6 – It’s a high stakes game for walk-ons.  During a point in the game when the result remains in doubt, any miscue by a walk-on, and out he comes.  All the equity built through hard work and perfection in practice can be erased by one turnover.  An errant pass, and the kid might never get another opportunity to play a meaningful possession.  One missed shot early in the shot-clock, and a career could come to an end.  That’s drama worthy of your attention.

5 – Scout team prep not fun.  I should have written that scout team prep is not fun for sane people.  Walk-ons enjoy learning the offense and defense of the upcoming opponent and serving as an unpaid opponent through hundreds of reps to prepare the rotation players.  That’s why so many become great coaches if they can continue to embrace the game after emptying their tanks as players.

4 – Study table.  Great for parents who want to limit a student’s free time and mandate attention toward studying, but for an ordinary college student, the response to the idea of a nightly study table would be, “Yeah, right!”  In most cases, the walk-ons are energetic hyper-successful miltitaskers with no need of the discipline a study table mandates.

3 – Once in a while, a walk-on might win a game for you.  Burton played 10 minutes in a strangely tough game at Rutgers, and hit two second half three-pointers in a seven-point win.  Niego has been a steadying influence when he’s come into games.  These guys have no idea when they will be called to contribute, so they need to be ready at all times.  If Burton had missed those three-pointers, Indiana might have lost to one of the worst teams in Big Ten history, and this season would look a lot different for the Hoosiers.

2 – Some coaches call walk-ons “fire hydrants”.  To my knowledge, Tom Crean does not do this, but Kelvin Sampson did.  He phoned an AAU coach in 2007 and asked if he had any fire hydrants that would consider walking on at IU.  The coach asked, “What’s a ‘fire hydrant?'”  Sampson’s answer?  “Someone I can piss on!”  Great hire, Rick Greenspan and Adam Herbert!  While Sampson might have been coarse in describing the role of a walk-on, he was accurate.  That should drive a few moments of applause for those fire hydrants when they are able to dry the piss long enough to hoop under the bright lights for a few moments.

1 – Cheering is a hell of a lot less fun than playing.  While walk-ons have the best seats in the house, that’s not why they do what they do.  They love working at the game, and dream of an opportunity to contribute during games.  Cheering is useful, but nobody spends a childhood shooting tens of thousands of baskets in an empty and partially lit gym to earn the right to cheer for others.

While Yogi Ferrell and Thomas Bryant might prompt more cheers in Assembly Hall than Niego, Burton, Tharp, and Taylor, their stories are no more compelling- nor any less deserving of our attention and applause.

Stick around, watch, appreciate, enjoy.  The walk-ons are Hoosiers too.

And for goodness sake, Tom Crean, when you ask them to report for action, call timeout to buy them a few extra moments of play rather than waiting for a stoppage.