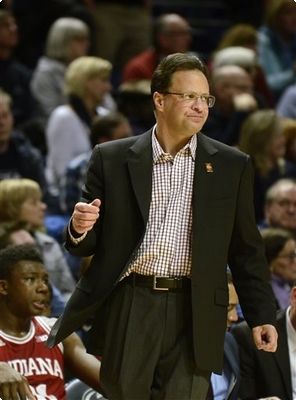 Tom Crean hopes in vain last night that his Hoosiers can find a way to beat a far less talented Penn State team.

So there I stand at Drake’s on 82nd Street in Indianapolis picking up some carry out, and the Indiana game against Penn State starts.  A guy I met because he listens to my radio show asks, “Are you sticking around for the Indiana game?”

“Nope, just picking up some food,” I tell him.

As I walk out of the place with a buffalo chicken quesadilla and some boneless buffalo chicken bites (I had a hankering for some spicy chicken, I guess), I am thinking that it’s really odd that I’m not at home that moment watching the game.

Over the last 30 years, I have rarely missed a minute of Indiana Basketball, even driving from the north side of Chicago to Griffith, Indiana, in 1992 to catch a game on channel 56 that was otherwise not broadcast.

For this game at Penn State, I decided the Hoosiers didn’t need to be my top priority – buffalo chicken was.

Is it me, or is it them?  Is my comparative indifference driven by the arrogance that has been the program’s calling card since Tom Crean’s arrival in 2008?  Is it the off the court antics that have distracted from the mission of the university?  Is it the Indiana high school basketball players who have chosen to play somewhere else – or were ignored by Crean?  Maybe it’s that I can talk to Purdue’s Matt Painter, Butler’s Chris Holtmann, and players from both programs every week while Crean in his players are protected from one-on-one access to the media.

Did getting food instead of watching the game live from start to finish mean I care less about Indiana Basketball and its prospects for a run during March?  Maybe.  It doesn’t please me, but I might just not care as much as I did last year, five years ago, or 25 years ago.

Earlier in the day, I spent two-and-a-half hours joyfully toggling back and forth between the Purdue vs. Maryland and Butler vs. St. John’s games, but as the IU game approached, I wandered over the Drake’s for some take out.

And it’s not only Purdue and Butler that captivate me.  I’ll watch ACC or Big East games because this season is unlike any other in college hoops I’ve ever seen.  I watched Duquesne and Davidson yesterday from tip to buzzer on NBCSN, so it’s not apathy toward college basketball in general that drove me toward buffalo chicken.

And it’s not for a lack of effort.  Last week on National Signing Day for IU Football, I had a nice talk with athletic director Fred Glass.  As we talked about hoops, I tried to gin up some genuine excitement about the Hoosiers the morning after the Hoosiers trounced Michigan.  It felt hollow and less than honest.

As it turned out, my decision to get some food was validated by an effort lacking in execution and poise during a 68-63 loss in un-Happy Valley.  Thomas Bryant stomping his feet in frustration over not getting fed on the block would have driven me nuts in years past, but a lack of emotional maturity is nothing new at IU.  Defensive lapses were frustrating, but unpunished – as usual.  Repeated silly turnovers brought shrugs as history became present again.

But the point isn’t to excoriate the Hoosiers for a poorly played game that resulted in their second Big Ten loss of the season.  It’s that my level of interest has declined from rabid to interested enough to watch live when convenient.

Don’t get me wrong, I eventually watched the entire game.  I DVRed it because I would never talk on my radio show (or write on this site) about a game I did not see in its entirety, but watching Indiana live as a lover of college basketball is just not important enough to keep me riveted to my television.  Frankly, watching the taped game made me question my dedication

Why?  How could this happen?

Despite a 19-5 season to this point, the Hoosiers are ranked #56 in the RPI – behind programs like Valpo, Akron, Davidson, South Dakota State, and others behind whom Indiana should never be.

Through no fault of its own, Indiana has enjoyed a cupcake Big Ten schedule to this point, but the season’s final seven games will provide five serious challenges from Iowa (RPI #8) twice, Michigan State (RPI #15), Maryland (RPI #5), and Purdue (RPI #22).

For those games, and whatever games follow in the Big Ten and/or NCAA Tournaments, I’ll find a way to get my chores done before the tip.  I won’t be at Drake’s waiting for delicious buffalo chicken goodness.

But when Indiana plays Nebraska and Illinois, I won’t make any promises.