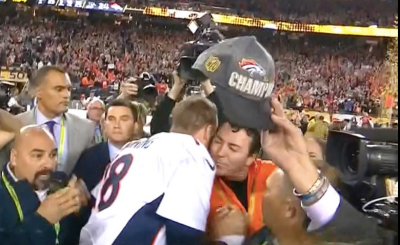 Sometimes the big moment in a Super Bowl comes during the game – and sometimes after, as was the case with this kiss between Peyton Manning and Papa John.

Super Bowls are always defined by those images that are seared into our memories.  Whether it’s Jackie Smith dropping a perfectly thrown touchdown pass by Roger Staubach in Super Bowl XIII, William ‘the Refrigerator’ Perry scoring a touchdown in Super Bowl XX, John Elway’s whirlybird after a scramble in Super Bowl XXXII, or the halftime shows and commercials that become iconic, the Super Bowl is more event than game.

Last night’s game had its moments with good and bad with Panthers quarterback Cam Newton and Broncos QB Peyton Manning in the middle of almost all of them.  Here is a sampling – the 10 that stood out to me:  (Feel free to add your own in the comments.)

10 – Mike Carey misdiagnoses yet another replay. Seeing it live, I thought the pass from Newton to Panthers wide receiver Jericho Cotchery was complete, and then when the replay was shown, I was sure it was.  When Jim Nantz invited replay analyst Mike Carey to the party to share his perspective, and Carey agreed with me, I knew I would be wrong.  Sure enough, the replay was said to confirm the call on the field as incomplete.  This call changed the game completely as two plays later the Broncos recovered a Newton fumble for a touchdown.

9 – Peyton holding his son during the postgame.  Sharing his final moments as a professional football player with his son was a wonderful send-off for a career well-played.  All the sacrifices made during his rehabs from knee and neck surgeries were made whole in that one moment, and it appeared Manning was aware of that moment’s gravity.

8 – Cam sitting on the bench – utterly alone.  As he awaited more opportunities to help the Panthers get back in the game, Newton sat on the bench with a less than inspiring expression.  He looked hopeless, and then he played like it.  Some athletes mature into leaders, and I hope Newton is one of them because last night Newton looked like a peevish and self-immersed mope.

7 – Puppy-Monkey-Baby.  It was creepy and odd, and for the life of me, I have no recollection what product that hybrid creature advertised, but I can’t get the image out of my head.  Another troubling image is the knotted intestine walking down the street.  I remember perfectly what product that called America to use.  Never knew there were that many people suffering from constipation.

6 – Beyonce’ steals the halftime show.  Not too hard when competing with a capable tunesmith like Coldplay’s Chris Martin, but there is no more dynamic performer in the world than Beyonce’.  Everything she does is bad-ass, and even Bruno Mars might have thought twice about occupying the same space.

5 – Peyton converts two-point try.  Neither Manning nor Newton did much to help his team in a Super Bowl decided by defensive aggression and excellence, but the throw Manning made on the two-point conversion looked reminiscent of the quarterback Indianapolis used to call its own.  It was nice to see him deliver one more ball on-time and on-target.

4 – Cam’s postgame comments – or lack thereof.  After the loss, Newton sat very briefly in front of the media as they peppered him with questions.  These questions came immediately after the most disappointing loss in his life, but leaders step up and give the media what they need so the others aren’t relentlessly bothered.  Newton had the opportunity to show himself as a class act in front of millions, but decided petulance was the right note.

3 – Jim Nantz remains oddly unflappable.  I’ve spoken to Nantz offline several times, and the weirdest thing about him is that the Nantz you talk to over a sandwich is exactly the same guy who describes a Super Bowl.  He appears to have no variation in emotional tenor.  His mood swings range from satisfied and calm to contented and composed.  I did see him swing a lady’s bra over his head once, but he did it awkwardly without enthusiasm.

2 – Peyton kisses Papa John.  I’m not off-put by men kissing men on the cheek.  I’ve done it myself from time to time, but immediately after winning a Super Bowl one of the last people I would choose to kiss (or be kissed by) would be Papa John Schlatter.  My wife would be first, but if she couldn’t get a field pass, how about Blake Lively or Kate Upton or Jennifer Aniston or that lady who was behind me in line at the Kroger checkout or the sales lady at Nordstrom?

1 – Cam stands over a fumble.  With the game still on the line – Denver ahead only 16-10 with just over four minutes left – game MVP Von Miller strips Newton.  The ball falls to the turf, and Newton stares at it without diving for it.  It’s said we reveal our character under duress.  Newton revealed himself as someone unwilling to do what’s necessary to win.  There is no question Newton possesses a litany of talents, but a champion would have immediately been on the ground fighting for that ball regardless of the physical consequences.