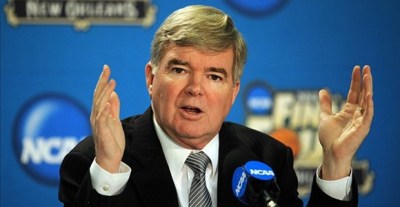 Yes, NCAA president Mark Emmert, my brain must be that big to have this many great ideas!

Yesterday, the NCAA took a step toward what I perceive to be logic as it decided the Tuesday and Wednesday games that begin the NCAA Tournament will no longer be referred to as “the first round.”

I’ve been yelping about this since 2011 when the NCAA decided the play-in games deserved the “first round” distinction.  For the coaches and players of the First Four (what the NCAA is now asking people to call the play-in games), the NCAA Tournament starts on that Tuesday or Wednesday.  For the rest of us, it starts on Thursday with the field of 64 as our brackets go live.

Congratulations to the NCAA for recognizing that while they might run March Madness, they cannot pull America kicking and screaming into referring to the play-in games as anything more than a cash grab contrivance that allows participation by an extra four teams.

Yesterday at 3:05p, I groused for the final time about my disdain for “first round” being used relative to the Tuesday and Wednesday games.  At 3:30p, the NCAA’s David Worlock released news of the change.  I have inferred from that timing that I am very powerful.  Finally, someone is listening, so now I press my advantage with more ideas.

Here are 10 additional changes I am strongly suggesting the NCAA make to college basketball:

10 – Eliminate non-TV timeouts.  Who enjoys and employs timeouts?  Not the fans.  Not the players.  Timeouts are for coaches.  Why is this system built for the pleasure of the coaches?  When did someone decide coaches are the most important constituency in college (or professional) athletics.  Players aren’t there for the coaches, or they shouldn’t be.  The coaches should be there for the players.  And if fans are going to have to donate tens of thousands of dollars to a university for the right to buy tickets, their enjoyment should be considered as well.

9 – Allow immediate eligibility for transfers.  I know this opens a pandora’s box of consequences that will invite greater skullduggery in college hoops, but preventing the athletes around whom this great game is built from studying and playing where they prefer seems more wrong than the result of turning them loose.

8 – End the one-and-done rule.  This is an NBA rule that is not in the purview of the NCAA, but it does not service the mandate of college basketball as an educational extension of universities.  College basketball should not be allowed to be used by the NBA as a cost-free feeder system, and championship hungry “schools” that employ young men who will be college students for eight months.  How do you fix this – minus the intervention of the NBA?  Your ideas are welcome.

7 – No more replay.  Can anyone tell me how replay reviews enhance the education of student-athletes around whom the college sports universe is supposed to orbit?  I didn’t think so.  Replay elevates the importance of the result of a play and game to a silly level.  Games are played and officiated by men and women who are fallible.  Basketball is not the sporting equivalent of cardiac surgery where a mistake leads to premature death.  It’s a game, and should be treated as such.

5 – Home and away game mandate for all conferences in basketball.  Regardless of size of conference, all should have to play home and away against each conference opponent.  In the Big Ten with 14 teams, each would play 26 conference games.  The ACC has 15 teams, so they will play 28 total conference games.  This accomplishes two things – the schedule will fairly assess the best team in each league AND awful games against tomato can programs will be eliminated.  Everyone (but the schools who barnstorm for game checks) wins!

4 – No more 9p games.  When Iowa plays Indiana tonight at Assembly Hall, the game will tip at roughly 9:07p and end at some point between 11:00p-11:15p.  With showering, media, and travel, the Hawkeyes will likely be in their Iowa City beds at 4p.  If these are truly student-athletes, the student part of the equation tomorrow is going to suffer.  Sure, there are a lot of college students who never go to class on Fridays, but there are 9p games every other night of the week too.

3 – Student-athletes regain control of their image.  This is the goal of the O’Bannon Case, which was prompted by a waiver student-athletes were required to sign as part of their scholarship.  It ceded the right to their collegiate image to the school and NCAA in perpetuity. That’s how EA Sports was able to use the images of real players without compensating those players.  It also allows schools to sell jerseys and other swag without negotiating a fee for the player.  To my knowledge college athletes are the only people in America who cannot profit from the use of their own image.

2 – Cheating coaches banned for life.  Want to stop university employees from paying prostitutes to service Louisville basketball players?  Ban for life all coaches who engaged in that activity, as well as those who covered their eyes and ears as it happened.  Academic fraud perpetrated by coaches?  Goodbye.  Corruption is easy to stop for a system with the stones to bring meaningful consequences.  As for Louisville basketball coach Rick Piton’s idea to fine coaches up to half their salary, a fine system is so easily paid for by boosters, it would only encourage increased corruption.

1 – Coaches employed and paid as tenured professors.  When salaries for coaches – who are university educators – spiral toward eight figures, corruption is going to be the result.  Reduce salaries to that of the average for a tenured professor, current cash-happy coaches will abandon ship for a more lucrative port.  Those enthusiastic about teaching the game will be left.  Some will win, and some will lose, but the bidding war that invites the less savory into college hoops needs to end if venality is to be stopped.

Let’s see if the NCAA responds as quickly to this request for change as they did yesterday!

Thanks to TSN and BTN’s Mike DeCourcy, who during an interview on my radio show pointed out the idiocy of Pitino’s proposal to fine coaches and schools.