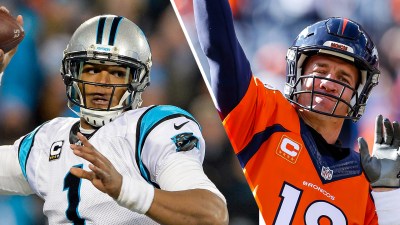 Cam Newton and Peyton Manning have a lot of differences before we ever get to race.

Anytime a black man and white man occupy the same space, there are going to be comparisons fueled by race.  Sadly, that’s what we do and who we are.

Peyton Manning and Cam Newton are NFL quarterbacks who faced off nine days ago in Super Bowl 50.  Manning is white and Newton black.  Manning has been named in a lawsuit against the University of Tennessee due to a 1996 incident, and Newton acted like a child when he lost the Super Bowl.

Many are claiming a double standard based on race as Manning is given a pass for his 20-year-old immature act.

Here are 10 ways Newton and Manning are dissimilar beyond their skin color that affect perception of their behavior:

10 – Manning’s goofy looking without athletic gifts; Newton is an adonis.  Maybe it’s unfair, but Manning’s goofiness makes his seem more human.  He runs funny, can’t throw it harder than most high school quarterbacks, and has a head the size of a Smart Car.  Newton is movie star handsome, runs with the strength and grace of a puma, and can make every throw.  He is physically superhuman.

9 – The dads are seen quite differently.  Archie Manning is a college football and NFL icon who played football with an uncommon grace.  He absorbed punishment in such generous measure it drove both admiration and pity.  Cecil Newton is a bishop of the Holy Zion Center of Deliverance, a church that was rescued from condemnation shortly after Cam pledged Auburn.  There were reports that Mississippi State was told a commitment from Cam would cost $180,000.  Whether or not the allegations of payment for services were true, the image of the elder Newton as a dad eager to profit from his son’s talent stuck.

8 – Manning’s rumored occasional questionable decisions are well known, but unsubstantiated.  It’s not a surprise to anyone in Indianapolis that stories continue to surface about Manning doing odd things.  In another city, maybe investigations would have hung meat on those bones.  Here, boundaries are respected and the private is allowed to remain private.  Newton’s indiscretions have been publicly documented – either occurring on-camera or resulting in a police report.

7 – America loves a winner.  Manning’s Broncos won the Super Bowl, and Newton’s Panthers lost.  Regardless of whether Newton wore a hood, refused to answer questions, and repped himself like a 12-year-old during the postgame presser, Manning won the on field battle so he gets the conquering hero treatment.  Had Newton won, pro-Newton media would cite critics for sour grapes, and they would be just in doing so.

6 – America loves a good loser.  How a person answers adversity goes a long way to answering our questions about the character of a man.  There have been countless athletes who have lost with elegance and earned respect.  Newton lost gracelessly, and now many in the media damn  those who criticize him as racists.  Maybe some are, but that doesn’t excuse a leader for not “manning” up and facing the music.

5 – The impulse to diminish the arrogant and redeem the modest is strong in America.  Whether you agree Newton is great or flawed, even he acknowledges his arrogance.  Manning has always had an “aww, shucks” persona that has made it fun to elevate him beyond what it appears he thinks of himself.  With the hubristic Newton, there is a compulsion to do the opposite.

4 – It’s not enough for Newton to do it – he has to do it his way.  Newton is a spectacularly gifted quarterback who can beat you with his legs, arm, toughness, and brain.  And he’s not shy about letting us know he knows it.  Prior to the Super Bowl, he said, “I’m an African-American quarterback that may scare a lot of people because they haven’t seen nothing that they can compare me to.”  Manning enhances his brand by deferring praise to his teammates.

3 – Manning’s issues are countered by very careful branding.  Never has Manning been as brash as Newton in declaring his desire to make money or build his brand, but that doesn’t mean that Manning hasn’t been exceptionally brand aware.  The Manning brand might not have been top of mind when he did whatever he did in Knoxville in 1996, but by the time it became common knowledge, it seemed impossible for many to imagine Manning doing it – whatever it was.

2 – We saw Newton act like a petulant child.  With Manning, we didn’t see what he did or didn’t do with the trainer at Tennessee.  Newton’s self-indulgence was seen live by millions.  There was no spin for Newton to use in cleansing the opinions of those who watched.

1 – Story about Manning junk is old news.  Maybe it wasn’t picked up nationally, but reports of Manning doing something with his genitalia (specifically what happened depends on who you believe) in the presence of a female athletic trainer while he was a student-athlete at the University of Tennessee have been well-known in central Indiana for years.  The settlement of a defamation lawsuit filed on behalf of the trainer was reported in the Indianapolis Star more than 12 years ago.  At that point, the story was seven years old.

Black and white has nothing to do with the perception of these two quarterbacks.