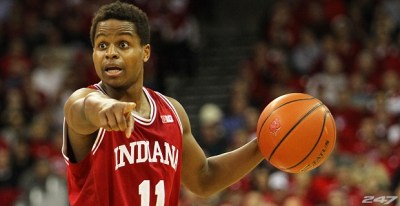 Yogi Ferrell’s evolution is one of the best stories of the to this point magical 2016 season.

Indiana Basketball stands very near an accomplishment that would have been impossible to imagine three months ago.

After losing to Wake Forest, UNLV, and Duke during a two-week stretch that was thoroughly disappointing, Indiana found itself, and is in the drivers seat to win the Big Ten regular season crown over teams like Maryland, Michigan State, and Iowa that have spent a significant portion of the season ranked in the nation’s top 10.

This season could still unspool and crash, but right now the Hoosiers appear to be very solid on both ends of the floor in a way that can be repeated during what they hope is a long March and dare-to-dream –  April.

There are many wonderful sidebars to ponder as the season continues, and here are my favorite 10:

10 – The next chapters might be even better.  The book of Indiana’s 2015-2016 season is 75% complete, but the remainder could be even better.  After beating a terrible Illinois team by 27, Indiana is two wins from one of the least likely Big Ten regular season championships in memory.  And after two trips to the Sweet Sixteen as the twin high water marks of Tom Crean’s previous seven seasons as the steward of the Indiana program, the potential for a deeper run is right there in front of this team.

9 – Max Bielfeldt is thriving as a graduate transfer.  After four years at Michigan, Bielfeldt was told he was no longer welcome in Ann Arbor.  Indiana was in need of additional size and toughness, so they offered him a scholarship.  It’s hard to say at this point whether the Hoosiers or Bielfeldt have gotten more out of that deal, but the marriage appears to be ideal for both.  Max is a tough and fundamentally sound defender who can score and rebound a little bit.   Crean wouldn’t want to think of where this season might have gone without Bielfeldt.

8 – Crean was seen as a coach on the hot seat, but it has cooled significantly.  There are still games to be played and potholes to be negotiated, but it would seem that for this one season Crean has been the right guy to lead this team.  Through the first seven seasons of Crean’s work in Bloomington, fans questioned whether Crean was a force for good in the aggregate.  Those questions will resurface because there has always been a disconnect between the fanbase and Crean, but for this window it seems everyone is enjoying the moment – even Crean.

7 – Tim Buckley gets to smile a bit.  A longtime Crean assistant and former head coach at Ball State, Buckley has worked a long time in college basketball without a hell of a lot to smile about or many moments to relish.  Indiana surprising the college hoops world must be sweet validation for a guy who I’m sure has had occasion to scratch his head at Crean’s methodology and quirky demands over the years.  Being an assistant is a tough life.  This season has had to be comparatively fun for Buckley.

6 – Harrison Niego is a significant contributor.  This freshman walk-on from the western suburbs of Chicago was a good high school player at Lyons Township.  When he chose to play as a walk-on at Indiana, I wondered whether he would ever get off the bench.  Tom Crean has correctly identified Niego (pronounced NEE-go) as a bench player who will make positive plays, and virtually never screw up.  Since December 1st, Niego has committed one total turnover, and last night had two steals and two assists in eight minutes.  That is nearly perfect walk-on play.

5 – Ambivalence for holding onto the ball is gone.  Indiana under Crean has always played fast and loose with the ball, resulting in an inordinate amount of empty possessions.  Through 16 games, Indiana had turned it over an average of 14.8 times per game.  That’s way too many for a team bent on an elite result.  Since then, IU has reduced its average turnovers to 11.5 per game – a very solid number given the Hoosiers pace of play.  Getting a team to embrace taking better care of the ball in the middle of a season is almost impossible.  Troy Williams still gives it up too much, but the team’s result is much better.

4 – James Blackmon Jr’s injury opened door for improvement.  Sometimes necessity is the mother of excellence, and that was the case with Crean trying to find a cohesive group that can both score and keep opponents from scoring.  It’s a shame for Blackmon that fans and media see his injury-driven removal from the lineup as the change agent that has brought IU to the precipice of a regular season Big Ten championship, but it absolutely gave Crean no choice but to assemble the right unit to compete to the team’s potential.

3 – Turnaround was unlikely but sweet.  After losing to Wake Forest, UNLV, and Duke, it appeared Indiana was going to be the same up and down group fans have grimaced about the past two seasons.  Reasons for optimism were scant because the defense was atrocious.  A win against Notre Dame in the Crossroads Classic gave a peek into the improvement that has given the Hoosiers a 1 1/2 game lead in the Big Ten, and wins against Purdue and Iowa showed it was no fluke.

2 – Tom Crean finally has taken his foot off the gas.  The reason Crean has succeeded in the coaching business is the same reason he has failed to win big – he has been relentless in his own work ethic and in demanding the same from his players and staff.  If an hour of shooting was good, two hours was great.  If a 30-minute lecture was good – an hour was twice as impactful.  If 200 offensive sets were good – 400 was twice as good.  This year, schemes have been simplified, and Yogi Ferrell has been asked to exert some control.  Crean has embrace less is more, and that’s where greatness can incubate.

1 – Yogi Ferrell has matured into a very effective leader.  A little under two years ago, Ferrell was arrested along with freshman Stanford Robinson for trying to get into Kilroy’s Sports Bar with a fake ID.  He was only two weeks from his 21st birthday.  This year Ferrell has been relentless in playing well on both ends and demanding the same level of effort from teammates.  There is still time for a Hoosier backslide, but through 16 Big 10 games, Ferrell is the most important player in the conference.