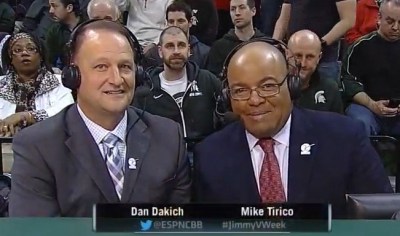 Dan gets a lot of exposure on ESPN, but that has little to do with his popularity on 1070 the Fan.

There is a petition being circulated via social media to remove Dan Dakich from 1070 the Fan, and it is having exactly the opposite effect if the management at Emmis listens to it correctly.

Only one unpardonable sin exists in media, and that is to inspire indifference.  Dan is definitively not the cause of any boredom among those listening to his show.

On a scale of one to five, with one representing hate and five being love, Dan scores lots of ones and fives.  Those who rate him somewhere in between are few and far between.

Here are the 10 reasons why Dan is simply the best at what he does (present company excluded!):

10 – There is nothing milquetoast about the show.  Dan never bores – ever.  Being easily bored is a common trait among great hosts.  Dan moves from topics before they bore listeners because he moves on before they bore him.  This is why being a talk host works so well as a career choice for those with ADD or ADHD.  They are never forced to be bored because they always determine the topic choice as the show moves forward.  At the first hint of tedium, we turn the page – or start fresh.

9 – Singing.  Listen, I hate it when Dan sings too, but it compels a response.  Some find it organic, goofy, and endearing.  Others wonder why in the hell he believes I want to hear him sing.  Either way, it forces us to stare at the radio for a couple of seconds, and that’s a win.  Great radio forces us to listen, and that’s a positive no matter the causes.

8 – Guests.  For a variety of reasons – friendships, connections, ESPN affiliation, popularity – Dan has the best guests in the state.  People don’t necessarily listen for the guests, but they sure aren’t repelled by them.

7 – He’s easily tweaked.  If Dan weren’t a little sensitive to criticism, no one would scratch at him.  It’s that vulnerability that both humanizes the show and makes Dan even more likable.  If Dan were callous to attack, people would never bother tweeting or calling.  As for the calls, I’ve never understood why people call to yell at a host who has all the power.  At any point in a caller diatribe, the host can cut him off and answer to his heart’s content.  Even worse, the host can cut up a particularly embarrassing segment of a call and use it for weeks, months, or years to illustrate the insipidness of a comment.

6 – Unvarnished honesty.  Dan is bored by political correctness, so he never indulges in weak sauce.  He is also very amused by his own ability to compel outrage, so he’ll occasionally go very strong to draw a little blood.  That not only entertains Dan, but engages listeners one way or another as well.

5 – Unpredictability.  Two callers on different days say basically the same thing in the same tone, but Dan hammers one and lavishes praise on the other.  The interesting part of segments where Dan takes calls has little to do with the calls, and a lot to do with predicting Dan’s responses, which is a great challenge.  That lack of predictability is engaging because it’s honest.

4 – Builds enemies of vapid and shallow contrarians.  For some reason, addlepated buffoons tend to engage with Dan on matters beyond their grasp.  Dan can turn a segment of moronic tweets from “twenty-somethings” without the life experience to dance effectively in the middle of Dan’s party.  Despite not enjoying the result, the tweeters continue to rage against the guy with whom they disagree so vehemently.

3 – Knowledge.  Dan knows basketball at a supreme level.  His show is worthwhile for his quirky unpredictability, but the depth of knowledge and insight about college basketball will attract hard core fans who want more than cantankerous rants.  At some point, every show has to display a core competency, or many listeners eventually tune out.  When Dan talks about Big Ten basketball, it’s must listen radio.  We are better informed fans because Dan shares his insights.

2 – Unique kaléidoscope of viewing world.  Dan has spent his life watching people and developing a litany of rules that must be followed if dire consequences are to be avoided.  They are idiosyncratic, but almost always right.  This compels thought, examination, and leads to discussions where his takes are discussed.  In bars and restaurants, I have never heard another sports talk show discussed (at least not since Kravitz & Eddie were fired).  I’ve heard, “Hey, did you hear Dakich yesterday…” dozens of times.  [I’ve heard my own show brought up, but when you hear your own name, it catches your attention in a different way, so I dismiss those.]

1 – Willingness to seek conflict.  Conflict breeds drama, and drama compels interest.  Very few in media are as willing to express direct dissent like Dan does.  He has a tolerance for disagreement and dislike that is unique, and that works very well in radio – a medium where most drift toward the middle.  Dan runs from the middle like it’s burning.

Another attribute of the show that deserves mention but has little to do with listenership is the measure to which Dan engages in charitable activity.  It humanizes Dan, and shows he knows that using a radio show for the public good is a critical responsibility for all hosts to indulge.  But anyone can grab a charity and pump it for goodwill.  Raising money for #JoshStrong or trying to help people quit chewing is wonderful, but not necessarily unique, if that makes sense.

Kent Sterling hosts the fastest growing sportstalk show in Indianapolis on CBS Sports 1430 every weekday from 3p-6p, and writes about Indiana sports at kentsterling.com.  He hired Dan for all of the above reasons to his current position.