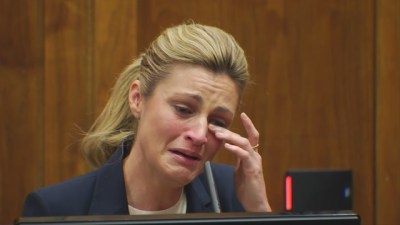 Erin Andrews cries everyday because 17-million people have watched a video of her naked.

It’s victimless, right?  Watching a nude Fox Sports sideline reporter Erin Andrews in her hotel room on our laptop, tablet, or smartphone.  The video is there, and our not watching doesn’t make it go away.

Yeah, not so much.

Andrews is a sports reporter who during her time at ESPN and Fox has become a celebrity, and there can be a substantial price for celebrity when exploited by a click hungry opportunist.

Anyone who watched Andrews testify yesterday in her lawsuit against both the hotel chain and perpetrator who booked rooms next door to Andrews for the purpose of surreptitiously videotaping her naked, saw how that video being watched by 17,000,000 sets of eyes has changed her life.

Given the ease with which any of us can generate and post videos for billions to watch, there needs to be a greater understanding of the damage that can be done because of our choices to “share”, or our decision to watch – even from the privacy of our own home.

That damage was seen in every tear Andrews shed yesterday as she re-visited the misery the video has caused.

Here are eight reasons Andrews is due an apology from anyone who watched the video:

7 – If 17-million have watched the video, Erin can do the math.  There are roughly 323-million people living in the United States.  That means (if viewing has been by Americans only) that roughly one in every 19 people Andrews sees in an airport – or sports stadium where she earns her money – have seen the video.  If she is at Lucas Oil Stadium in Indianapolis, which seats 70,000, roughly 3,700 of them have seen her naked.

6 – No matter what she does, Andrews will always be the girl in the video.  Regardless of the quality of her work, people will always respond in conversations about Andrews with, “Oh yeah, the lady from the videotape!”  To work a lifetime to build a reputation, even in the disposable world of sports broadcasting, only to be dismissed as the “girl in the video” is a miserable by-product of the video being made and posted.  She is defined in stone and forever in a manner over which she had and has no control.

5 – With great access comes great responsibility.  Think of a moment when you indulged a momentary weakness.  Now, imagine the result of a shadowy figure with a smart phone and a desire for clicks shooting and uploading a video of you at your worst.  Andrews did nothing bad or wrong.  She assumed that no one could see into her hotel room, and was unclothed.  Now, 17-million people have seen her naked.  Imagine how exposed you would feel if millions watched you do anything.  Now, imagine the feeling of being watched doing anything while naked..

4 – Moving on is hard for many victims.  The video was unleashed online almost seven years ago, but it was clear during yesterday’s testimony that the emotional scars to Andrews have not healed.  Building trust takes years.  Irreparably violating trust takes a single bad decision, and those wounds never totally heal.  A decision to seek clicks, or satisfy curiosity online can cause damage that ruins a life.

3 – Fame is not an invitation to engage.  People need to remember that their familiarity with a famous person is not shared by the famous person.  To treat someone you see on TV like an old friend puts the famous person at a distinct and unpleasant disadvantage because they have no idea at all who in the hell we are.  It’s a great compliment to be treated as someone people know and like, but expecting the same in return from them is illogical and off-putting.  Watching the video is essentially inviting yourself into Andrews’ hotel room – a place you do not belong.

2 – Andrews will never trust strangers again.  This was the saddest part of yesterday’s testimony from Andrews’ mother.  She said that Erin used to talk easily with strangers, but never engages now unless she is accompanied by security.  Living within tall walls built in response to an emotional invasion is a miserable way to live, and each of those who watch the video forced Andrews to add another brick to that wall she will never be able to tear down.

1 – Anyone who watched is as guilty as the creep who videotaped Andrews.  That 17-million people felt obliged to watch a video while aware that the subject absolutely did not want anyone to see it is troubling.  Each of us needs to make choices that respect the boundaries set by others – even in the privacy of our own home or cubicle.  “None of your business” extends to the internet.