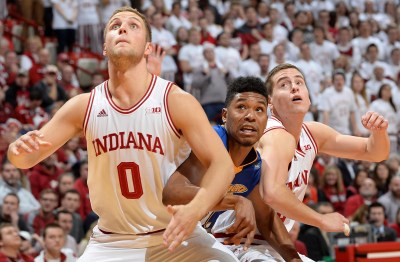 Max Bielefeld and Nick Zeisloft have been key contributors to Indiana’s success because they were free to transfer with immediate eligibility.

Indiana clinch a Big Ten championship two nights ago by beating Iowa, and two Hoosiers were instrumental in helping IU to that win.  Max Bielfeldt and Nick Zeisloft combined to hit five-of-seven three-pointers to shoot the Hoosiers to an 81-78 win.  Both are graduate transfers.

The grad transfer rule allows athletes who have earned an undergraduate degree to move from one school to another with immediate athletic eligibility.

Many coaches complain that the rule should be abolished because it creates a culture of free agency in college basketball that is detrimental to the game.  This is, of course, self-serving nonsense.  [ed. note: I’m restricting this to men’s basketball because it’s top of mind, but the same rules hold true for football and other sports for both men and women.]

Here are 10 reasons the grad transfer is a force for good in college hoops:

10 – Coaches can work forever; players have a tight window.  Coaches often work into their 70s, socking away giant piles of cash for the pleasure of teaching young men the game of basketball.  Players get four years to develop and display their gifts for the joy of the game and a scholarship.  Forcing a college graduate to sit a year because he decides to switch employers was a self-serving and unnecessarily punitive measure by a system created and managed by coaches for whom career advancement is job one.

9 – Bob Bowlsby quote reveals hypocrisy.  Here is what Big 12 commissioner Bob Bowlsby had to say about the grad transfer rule, “For me, I look at it from a player standpoint, and I think of the kid at Eastern Washington (quarterback Vernon Adams) who transferred to Oregon. What message does that send to his teammates that have been sweating and bleeding with him for three years? He gets a better offer and jumps ship. I’m not sure that’s a great message to send to a group of teammates.”  And yet coaches often jump from one program to another for the same reason without penalty.  One set of rules for the adults and another for the kids reeks of the self-righteous blather administrators advance all too often.

8 – If coaches don’t like the rule, don’t use it.  Many times, the people who cry the loudest about the inequity or foolishness of a rule are those who use it to the best advantage.  In no profession is that truer than coaching college athletics.  The drive to win motivates massive hypocrisy in collegiate athletics.  “I hate (insert rule here), but we couldn’t have won our championship without it,” is a quote we hear relentlessly from college sports.  It comes from John Calipari discussing the one-and-done rule all too often.

7 – Getting an advanced degree usually requires a single year of academic work.  If a player is required to sit for a year prior to utilizing his last year or two of athletic eligibility, how many grad degrees is a student-athlete supposed to earn?  Forcing the kid into two (or three) years of graduate school seems counter to the needs of the player, program, and school.

6 – Life is too short to play at Cleveland State.  Nothing against Cleveland State, but it seems to be a place where players bounce from with regularity.  There are dozens of schools that don’t engender the level of loyalty required to keep players tethered to a program.  If you can graduate from one of them, why should a rule bind a player to finish their eligibility there?

5 – Universities are for education.  The promise of a university is that because of all activities there, a student will be better prepared to meet the needs of the next step in the journey through adulthood.  If a kid comes to Cleveland State because that is his only offer, and improves to the point where Tom Izzo of Michigan State covets him, isn’t that a wonderful outcome for the player?  Sure it is, and the coach at Cleveland State should take great pride in a kid with a Cleveland State degree heading to East Lansing.

4 – Some players develop late.  Growth comes after high school for many.  For others, they have adult bodies at the age of 14.  Should a kid who blossoms late be penalized by sitting out a year after earning a degree if he is able to move on from a low major to an ACC or Big Ten program?  Why?  To make the coaches of the low majors more secure in their positions?  Who is college basketball for – the coaches or student-athletes?

3 – Kids make mistakes.  Sometimes a kid and his support system make an error in where they decide to attend school and play basketball.  Assessing and correcting the mistake after fulfilling the promise of earning a degree should not bring with it a penalty of being unable to play for a full year.

2 – World doesn’t revolve around coaches.  There is a sense of entitlement expressed by coaches that is one of the most troubling aspects of college athletics.  The team isn’t there for the coaches.  The coaches should be there for the team.  When the basic construct of higher education becomes skewed in favor of the “adults”, ridiculous punitive rules are enacted to penalize student-athletes.  Coaches moan about players transferring as though the effort to help them develop as men and players entitles them to whatever bounty those players can provide.  Sure, making a living based upon the level of competence and behavior of adolescents can be maddening, but no one forces a coach into it.  Coaches are educators whose greatest pleasure should be the maturation of his players.

1 – Scholarship does not equate to indentured servitude.  Just because a kid accepts the pass through expense of an education as compensation for four years of work and sacrifice, he doesn’t become the property of the university or coach.  There need to be some checks and balances, like a year of ineligibility for undergrads who transfer, to keep college basketball from becoming total chaos, but for those who have earned a degree a modicum of trust should be conferred upon a student-athlete.

The consequences of the graduate transfer rule aren’t entirely positive, but in the aggregate this rule works to tilt the scale slightly in favor of the student-athletes.  For that reason, it should continue to exist as evidence that the adults in charge aren’t a bunch of self-indulgent mopes using the “plantation mentality” former NCAA chief Walter Byars spoke of when describing the business model of college sports.