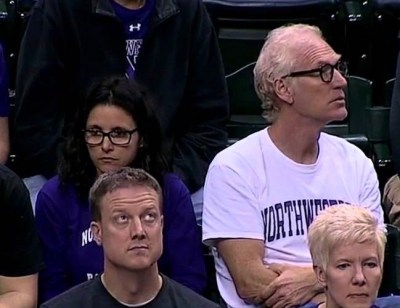 Julia Louis-Dreyfus (with husband Brad Hall) cheered like a normal basketball mom yesterday as her son’s Northwestern team lost to Michigan in OT.

So much basketball this weekend at Bankers Life Fieldhouse, so little time.  If we’re not watching games, we talk or write about them.

Could anything be more fun than being at these Big Ten Tournament games?  The atmosphere is electric as seniors make their last stands, coaches try to will their players to give just a bit more, and fans hope their stay in Indianapolis lasts another day.

Sitting courtside, I get to see and hear a lot of the greatness, sadness, and madness that makes great a winner moves on and loser goes home event like the Big 10 Tournament.

Here are my top 10 takeaways from yesterday’s craziness (expect more of the same in today’s four games):

10 – Iowa is exhausted.  Teams go through stages of fitness through a season.  Some peak late, and others might find their mojo in the middle.  Then there are teams like Iowa this season (or Indiana in 2013) whose legs dissolve underneath them late in the season right before our eyes.  Iowa was ranked fifth in the country 33 days ago when they beat Illinois in Champaign by 16.  Yesterday, the Hawkeyes lost to Illinois by two – its sixth bad beat in the eight games that followed that win on February 7.

9 – Open locker rooms for media would enhance college hoops coverage.  The only time the media is allowed into the locker room to speak unfettered with players after a game is during conference and NCAA tournaments.  The players handle things well, and the coverage of their teams is better.  I’m unsure why media has no access to players after games in the locker room during the regular season, but the Big Ten and NCAA experience shows the players are more than capable of handling themselves with the media.

8 – Julia Louis-Dreyfuss knows enough about hoops to cheer correctly.  The actor who played Elaine Benes on Seinfeld and plays Selina Meyer on Veep has a son playing for Northwestern.  She sat straight across from me yesterday as she watched the Wildcats.  She cheered like a parent who knew something about basketball, not some pampered and easily distracted celebrity mom.  I like her even more now.

7 – The green sweat suits adorned by the Libman Mop Crew are hideous.  There are very few things I would not do for cash, but mopping sweat off the floor of Bankers Life Fieldhouse while wearing those awful green sweat suits is not one of them.  I have no problem with mopping sweat.  Been there, done that.  The green sweatsuits are where I draw the line.  I suppose the goal is to get their mop crew noticed, but this is a humiliating display for the poor bastards assigned to don green nightmares that would be garish at a Florida retirement home.

6 – Bryant MacIntosh is a really smart player.  I just love watching this guy play basketball.  I saw him in high school and AAU basketball, but it’s been great to see him continue to blossom under Chris Collins at Northwestern.  I would have loved to see MacIntosh stick around somewhere in Indiana, but this marriage between kid and program seems to be perfect.  Macintosh can think the game at the highest level and he shoots it really well.  He’s going to lead Northwestern to its first ever NCAA Tournament appearance in the next two years.

5 – Even with bad weather, Indy is a great host city.  Walking around downtown, even in the light rain that rarely stopped, was great fun.  People were friendly as always, and visitors seemed to be very comfortable and happy.  My show broadcast from the Tin Roof, roughly 100 yards north of Bankers Life Fieldhouse, and it was filled with fans enjoying themselves.  What fans look for in a host city is ease of finding fun and friendly faces.  Check and check.

4 – Fatigue from playing daily in Big 10 Tourney not an issue in NCAAs.  There is always a lot of chatter about how playing a game per day for three days might rob players of whatever energy their bodies have left right before the NCAAs.  Last year, Michigan State and Wisconsin played Friday, Saturday, and Sunday in the Big 10 Tourney in Chicago, and then advanced to the Final Four in the NCAA Tournament.  In fact, the Badgers and Spartans played into overtime in the Big 10 Championship game, so they played an additional five minutes of emotional hoops.  They were no worse for the wear.  Conversely, Indiana finished its Big 10 Tourney on Friday with a loss to Maryland, and then bowed in the first round of the NCAAs.

3 – Teams better enjoy having an edge in 2016 over Ohio State.  The Buckeyes have had a sub-par season by Thad Matta era standards, but they are young and talented as hell.  Matta will have everyone but Jake Lorbach (you are right to ask “Who?”) back next year, including Marc Loving and Jaquan Lyle, who might be the best player in the Big Ten in a year or two.  This season’s backslide for Ohio State will be short-lived, so fans of rivals need to revel in this year’s mediocrity (assuming they don’t get hot this weekend) before Matta unleashes another monster.

2 – Coaches are insane.  If a boss in any business other than college basketball behaved with the ill-temper of a college basketball coach, the business would be defending itself in a series of lawsuits well into the 2020s, and the managers would be fired before the end of the day.  The vitriol and invective that pours in a relentless torrent from coaches is both hilarious and troubling.  Yesterday, Northwestern coach Chris Collins accused Big Ten officials to their faces at the end of regulation in a game they eventually lost in overtime of rigging the outcome to ensure Michigan makes the NCAA Tournament.  Wow!

1 – Simplest answers always explain basketball.  The secret to basketball is no secret at all.  If you make shots, you win.  If you miss shots, you lose.  There are some vagaries that cause shots to go in or bounce out – like defensive strategies, ability to rebound, etc…, but in the end, teams that find a way to make shots will win games.  Yesterday, Butler’s Kelan Martin and Roosevelt Jones combined to hit just five of 24 shots.  Similarly, Wisconsin’s two best players, Bronson Koenig and Nigel Hayes hit only five of 27.  Both Butler and Wisconsin lost.  See, simple.