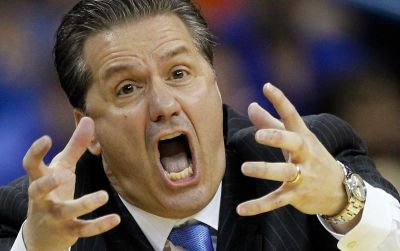 After losing to Indiana, Kentucky coach John Calipari should be willing to resume the series between the Wildcats and Indiana Hoosiers.

When Indiana beat Kentucky Saturday to eliminate Big Blue from the NCAA Tournament, not only was it a triumph of good over evil, it may put in motion talks to resume a home and home series between two of the most storied basketball programs in America.

Indiana playing Kentucky makes way too much sense not to happen every year, and with Kentucky a loser in the latest NCAA Tournament mandated matchup between the Wildcats and Hoosiers, Kentucky coach John Calipari might be motivated to play Indiana again on a regular basis alternating between Rupp Arena and Assembly Hall.

Here are nine great reasons for the resumption of the home and home series:

9 – The SEC has eroded into virtual basketball irrelevance.  Only three teams from the SEC qualified for the NCAA Tournament, and only one remains after a miracle comeback against Northern Iowa.  The Big Ten put seven into the field as it usually does, and while only three survived the first weekend, that’s three times as many as the SEC.  Kentucky would never be a candidate for an invite to the Big Ten, so they need to play a robust non-conference schedule or risk a negative adjustment in its seed – as happened this year.

8 – The high school all-star series between Kentucky and Indiana has become monotonous.  Two states with a common border and shared love for basketball should find a way to measure the hooping being done in the two respective states.  The results of the high school all-star series have become so heavily weighted in favor of Indiana that it hardly bears mention anymore.  Kentuckians should demand a resumption of the series to redeem themselves as a basketball state.

7 – Calipari doesn’t want to be branded a coward.  Sure, he countered Indiana’s demand to continue the series as a home and home with some ridiculous neutral/home court hybrid.  It was an ingenuous effort to dodge the bullet of being perceived as a bad loser after the Christian Watford shot that beat Kentucky in 2011.  After beating IU in the 2012 NCAA Tournament, Cal had his trump card.  Kentucky was just too good for Indiana.  Not after Saturday’s game it isn’t.  Now, Cal needs Indiana.

6 – Every Kentucky player deserves a chance to overcome the best home court advantage in college basketball.  Assembly Hall is the weirdest basketball arena in the world for a variety of reasons, not the least of which is the allotment of 7,800 prime seats for students who show up for games ready to assert themselves into the fray as a serious distraction to opponents – especially a program like Kentucky whose insistence on embracing the wrong way in the pursuit of winning is nauseating north of the Ohio.

5 – At some point scheduling should be fun, not strategic.  What’s more fun for players and coaches than a geographic rivalry that stirs emotion and compels serious work?  The players at Kentucky are motivated more by a first round selection in the NBA Draft as soon as possible, but maybe a more imminent test would generate a little extra focus.

4 – Kentucky can’t hide behind that 2012 NCAA Tournament win anymore.  “Indiana is irrelevant compared to Kentucky.  What does Cal have to gain by playing?”  That question was annoying after Indiana couldn’t follow up the Christian Watford game-winner with a win the the Sweet Sixteen of the 2012 tourney.  Now that the Hoosiers vanquished Kentucky in a game they came close to dominating, Kentucky can’t claim program superiority with a straight face.  Calipari has something to prove now.

3 – Students deserve a chance to see some real basketball before the conference season.  Playing on a neutral court in a major metropolitan area is good for stroking alums and expanding a recruiting base, but it doesn’t do anything for the constituency to whom the games are most meaningful – the current students.  They deserve a chance to see some good basketball as a diversion from studies and parties in both Bloomington and Lexington.  That’s what college basketball is – or should be – a diversion.

2 – Indiana fans hate Kentucky fans.  There is no group more annoying to Indiana Basketball fans than Kentucky’s Big Blue Nation – a group for whom the ends justify the means.  Winning means everything among fans in Lexington.  They covet championships regardless of how or with whom they are won.  Players who treat UK like a kibbutz where they spend eight months toiling at basketball while preparing for an NBA career are praised as virtuous warriors.  Having a chance to validate the cultural virtue of a program that insists on players receiving an bonafide education would give Hoosiers fans a chance to claim both the moral and basketball high ground on an annual basis.

1 – Economics.  Last Saturday’s Indiana vs. Kentucky game was the highest rated of the second round by a full ratings point (6.9 to 5.8), and the highest rated of the season among all college basketball games.  Why not satisfy the two most rabid fanbases with an annual treat in December to take the place of yet another game against Lipscomb, Jacksonville, LIU-Brooklyn, or another money grubbing barnstorming  program looking for a payday?  Give the people what they want.

9 thoughts on “Top nine reasons the Indiana vs. Kentucky home and home series should resume”