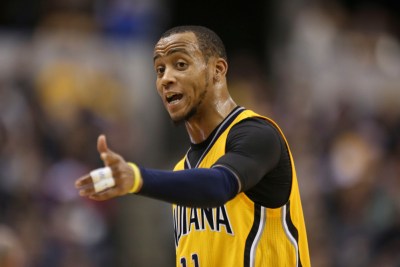 Whatever the problems with the Pacers, let’s help Monta Ellis point out some reasons for hope.

Hoping is more fun than giving up, so Indiana Pacers fans continue to believe in a team that seemingly has lost all hope in itself.

Last night’s 20-point loss to the Orlando Magic was a low point for a team that somehow remains one-game in front of the Chicago Bulls for the eighth and last playoff berth in the Eastern Conference.

The Magic are terrible, but the Pacers were much worse, so fans search for answers.  They want to know who to blame.  Is it the Hometown Hero, PG-13, the nicest coach in the history of the NBA, Larry Legend, the enigmatic Monta Ellis, or the still despondent former Area 55 inhabitants who were cast to the four corners of Marion County when Roy Hibbert was traded?

I’m going to try to cheer myself up by writing a list of the 10 reasons fans should remain optimistic about the Pacers.  Prior to writing the list, I’m in such a foul mood about wasting my time five hours watching the Pacers lose to the Bulls and Magic Tuesday and Thursday, I may invoice the Pacers.

Prior to writing the list, I’m afraid the Pacers are incapable of winning another game – even tomorrow night’s tilt against the NBA’s worst team – the Philadelphia 76ers.  Going to the playoffs appears out of the question, although I wouldn’t describe the Pacers as “despicable”, as 1070thefan.com’s Conrad Brunner did in a tweet last night.  I’m just shy of that level of disgust.

Here are the Top 10 reasons the Pacers will make the playoffs:

10 – Ty Lawson?  Hey, I like Lawson, and think maybe he is the long term solution at point guard.  Just last year, Lawson was a dynamic force for the Denver Nuggets.  He should be able to find his way back to relevance as he rebuilds his brand after a pair of DUIs and his miserable 3/4 of a season in Houston.

9 – Missing the playoffs last year is something no one wants to re-live.  From a pragmatic standpoint, coaches and players know that Larry Bird is not just going to sit on his ass and allow the team to remain mired in mediocrity.  After last year, when the Pacers nearly made the playoff without Paul George for nearly the entire season, this year was seen as ripe for a potential bounce back.  If the Pacers backslide despite George’s return, there will be consequences, and no one wants those repercussions..

8 – Bulls schedule not so easy.  The Cavs, Grizzlies, Heat, and Pistons are among the Bulls last seven opponents, and while they are capable of winning any of those games if Nikola Mitotic stays hot, a split would be a great result.  Or they could lose all four.  If that happens, the Pacers would have to play worse than last night during the home stretch to fall to the ninth seed behind the Bulls.

7 – Five upcoming Pacers opponents are the dregs of the East.  No matter how poorly the Pacers have recently played, they can’t be as bad as the 76ers, Knicks (2X), Nets, and Bucks.  Those four teams occupy the last four places in the East.  The 76ers are 9-66.  The other three are a combined 62 games under .500.  Win those five games, while losing to the Raptors and Cavs, and the road to the playoffs should be clear.  Lose any of those five, and the Pacers don’t belong in the playoffs.

6 – Paul George continues to rebuild his strength after his broken leg.  By any measure, this has been a very solid season for the Pacers best player.  Coming off that catastrophic injury suffered while playing for USA Basketball, George has notched nine games posting 25+ points and 10+ rebounds after posting only 10 of those during his entire career.  While he has suffered some bumps and bruises lately, he is still capable of leading the Pacers to a win against any team in the NBA.

5 – Myles Turner has developed into the steal of the draft.  Selected 11th overall, Turner has blossomed into a player that people inside the organization are convinced will develop beyond the all-star level to being an all-star who also wins.  If he has learned a lot during his first season as a pro, the next two weeks will bring an opportunity to show it.

4 – Frank Vogel hasn’t worn the Pacers raw with criticism.  The longest tenured coach by more than a season in Pacers NBA history, Vogel leads with pats on the back, not kicks in the ass.  Whether the Pacers have grow tired of being praised has not been shared by players, but if Vogel has been reluctant to go to the whip with this group, now is a good time.  After five seasons, he should have banked that level of equity with his roster.

3 – Lavoy Allen is playing very well.  When Allen is on the court, the ball moves on the offensive end and rebounding improves.  The Pacers need more of both, and maybe they have found a change agent in Allen.

2 – Health is mostly good.  Rodney Stuckey hurt his wrist last night, and there are a few bumps and bruises around the Pacers locker room, but for the most part they are as healthy as anyone else in the NBA.  It didn’t do the Pacers a lot of good last night, but good health should bring good results.

1 – They’ve been in a dark place before.  Remember two years ago when ESPN’s Marc Stein reported that Vogel would be fired if the Pacers didn’t advance to the Eastern Conference Finals?  No one bought the report, but the Pacers found a way to win the first two rounds of the playoffs.  Being cornered didn’t serve them last year when just one win away from the playoffs, and lost to Memphis in the last game of the season.  Let’s remember the good though.

Now, do I feel better about the Pacers.  Not really.  No matter what we think, write, or say, this is a mess only the players and – to a lesser extent – the coaches can clean up.