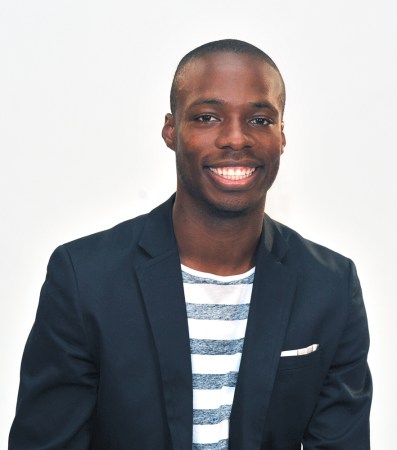 Michael Grady is a great choice as the Sportscaster of the Year.

The only prerequisite for the board-op job was the ability to keep an appointment, and Michael did that with both a phone and personal interview.  Being a board-op is a foot in the door position that can lead to better things.  For Michael, it has.

Michael is not just a great broadcaster on both RTV6 and 1070 the Fan in Indianapolis, he’s a really good guy – funny how those two traits go hand in hand so often.

My only role in helping Michael succeed was in delaying it by not recognizing as quickly as I should have how ready he was for additional challenges.  Once that switch flipped, Michael did the rest.  And he continues to.

Here are the 10 reasons Michael has been able to achieve such a unique level of success in such a relatively short period of time:

10 – What a voice!  Most of what Michael Grady is best appreciated for comes from his talent in communicating and his friendly disposition, but let’s be honest about that voice.  It’s unbelievable.  Not just a deep rich tone, but there is a friendliness that leaps from the speakers into the ears of listeners.

9 – Makes his bosses look good.  What a delight it was to have an answer every time my boss asked, “Who can…?”  Michael is like a utility club in golf that can’t be mis-hit.  Not only is he versatile; he is versatile and excellent.  It’s no wonder the Pacers and RTV6 continue to lavish more responsibility on him.  And, he is virtually maintenance free.  With a team of Michaels, a manager would be unnecessary.

8 – Never daunted by disappointment.  Michael applied for the morning producer job at WIBC in the mid-2000s, and I was an enthusiastic supporter of his candidacy.  While the final decision as to who should get the job was mine, I allowed the group who would be most affected by the hire to have a significant voice.  They endorsed the other finalist, and I reluctantly acquiesced to their wishes.  The new producer was committed and did a fine job, but I promised myself that if Michael stuck around despite the disappointment, I would make it right.  When the decision was made in 2007 to launch 1070 the Fan, I was asked who my first hire would be.  Michael as executive producer was the easiest call I ever made.

7 – Dedication to task at hand.  When we launched, there was going to be a two-week lag between flipping the switch and being an ESPN affiliate.  Needing something to fill that time, we decided to re-broadcast the greatest play-by-play moments in Indy history.  Dozens of Indy 500s, Colts, Hoosiers, and Pacers games were selected to air – many for the first time since they were heard live.  Someone needed to take all those tapes, dub them into Audio Vault, and insert  some voiceover descriptions to provide context.  I asked Michael.  He agreed – as always – and went to work for weeks to make us sound great right out of the gate.  As with most of what Michael touches, the result was flawless.

6 – Extreme competence.  Ask Michael to do something, and he does it like that task is the difference between success and failure for himself and his station.  Whether a sexy and fun responsibility like a play-by-play event, or the comparative drudgery of voicing promos or running a board – Michael has always delivered.

5 – Amiability.  I have never seen Michael angry – ever.  Not once.  He has an easy smile, loud laugh, and great sense of humor.  In a business that tolerates talented egomaniacs, Michael has always been an eager member of a team.  He’s a great talent, but a better guy.  I tested him once by yelling at him a little bit.  He didn’t return my anger.  He looked at me with disappointment.  I didn’t do it again.

4 – A very calm and even disposition.  One of Michael’s first responsibilities with 1070 the Fan was as the producer for Kravitz & Eddie.  Neither Bob nor Eddie had done a lot of radio, and both were very nervous when the show began its way too short two-year run.  Michael’s sense of calm and confidence was one of the many reasons the show was so successful so quickly.

3 – Never being overmatched by a moment.  Whether Michael did something for the first time or the 1,000th time, Michael is always exceptionally well-prepared and confident in his ability to deliver what is promised.  I asked him to do the play-by-play for the Wooden Tradition just to see if he could.  Doing a one off doubleheader of basketball games with whom you are not intimately familiar is tough for anyone – but especially so for a young broadcaster.  I sat next to him in case I was needed.  I wasn’t.  Michael was great.

2 – Ability and desire to say yes.  I have never known Michael to say no to an opportunity, or back away from a commitment.  After becoming the executive producer at 1070 the Fan, I kept throwing stuff at Michael just to see how he would do.  When I needed a voice for promos – Michael.  When I needed a play-by-play voice for the Wooden Tradition Basketball event – Michael.  When the Pacers called and asked if I knew anyone who might want to host contests during timeouts and end of quarter breaks – Michael.  He always said yes, and he always delivered quality work.

1 – Patience.  As a 20-year-old student at Vincennes University, Michael started as a weekend board-op for a pet show and a cooking show on WIBC.  He spent more in gas driving to and from our studios than he was paid, and he never missed a shift or complained.  When the producer spot for Network Indiana’s Sportstalk opened, I needed a person who would never miss a shift because no one wanted to fill-in from 8p-Midnight on Friday and Saturday nights.  Not only did Michael never miss, he did the job at an exceptional level for several years before I finally found the right spot for him as we launched 1070 the Fan.

As always, the most interesting thing about Michael is not what he has done, but what he will do in the future.