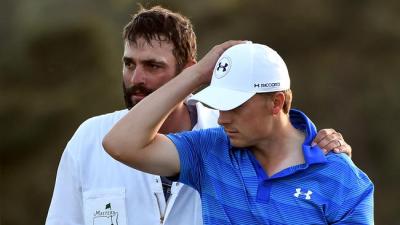 If despair brings wisdom, Jordan Spieth awakened this morning a bit wiser than he did yesterday.

When 22-year-old Jordan Spieth made the turn yesterday during the final round of The Masters, he was in complete control of the tournament with a five-stroke lead.  Three holes later, Spieth has lost six strokes to par – and the tournament.  Such is golf.

Spieth learned more missing out on a second straight green jacket than he ever could have from winning the tournament.  None of us will ever play golf like Spieth does, but we can learn just as much from golf as he has – or will.

Here are the top 10 lessons we can all learn from playing golf:

10 – Forgive your errors.  All of us screw up from time to time.  The greatest lessons any of us learn are driven by our mistakes.  Knowing that the result of a mistake is increased knowledge or wisdom, you would think we might be able to quickly forgive and forget our transgressions – especially while doing something is silly as playing golf.  Spieth blocked his tee shot into the water on 12, and while living in the regret of that error, he chunked another wedge into the drink.  Forgive, forget, and play on.

9 – Seek the advice of someone who knows more than you.  The best advice I have ever gotten about a golf swing came from a professional who told me, “Swing with your chest, not your arms.”  Not sure why that resonated with me, but my handicap dropped six strokes immediately after I started swinging by turning my chest instead of swinging with my arms.  Instead of trying to prove what you know to others, be a sponge for all the information you can absorb from from those more knowledgeable than you.

8 – Choose the right tools for the job.  You can buy clubs off the rack, or get fitted based upon your size and swing.  Getting fitted shaved stokes off my score immediately, and there was no additional cost.  Even if you play three times a year, get fitted.  There is no reason to spend four or five hours trying to play an impossible game with ill-fitting clubs.

7 – Thinking outside the box can bring rewards or punishment.  Creativity is a wonderful tool in life and in golf.  Sometimes it pays off, and other times it comes with a stiff penalty.  From 105 yards out, you can choose lob wedge like everyone else, or play a little knock down nine-iron punch shot.  One is routine, and the other might be spectacular or a disaster.  Same thing in business.  The box can be a warm and inviting place.  Outside is lonely, but ultimately might be more rewarding.

6 – If you suck at golf, play fast.  Taking 16 practice swings is not going to help you make when good pass when it counts.  You might not make a great swing if you just walk up to the ball and hit it, but if you suck there isn’t much chance a bunch of practice swings will help.  If you can’t putt, taking three minutes to line up a 40-foot putt is ridiculous.  Why take five hours to shoot a 105 when you can do it in 3 1/2 hours?

5 – Preparation is a not-so magic elixir.  There is no excuse for arriving at the course three minutes before your tee time.  Golf is too damn expensive to take the first three holes to get loose.  Hit some balls on the range, starting with half swings on short irons.  Get to the putting green, and hot some putts working from three feet out to 10 and then 20.  Chip a little bit too.  Same holds true with business.  Preparing for meetings makes the result more predictably beneficial.

4 – Self-confidence is key to success.  Whether you are making a pitch to a potential client or standing over a 15-foot birdie putt on 18 worth $35, believing you can close the deal is the last step in getting it done.  Belief doesn’t ensure success, but lacking that confidence mandates failure.

3 – Live in the present.  When I played for my high school golf team, I was +1 after six holes in the sectional final.  That was pretty good for me, and after striping a drive on seven I started to think about what would happen if I could par that hole and the next two.  To shoot a 37 on the front would be a great result and allow the rest of the team relax a bit.  I had an easy nine-iron into the green on my second, and with dreams of a 37 dancing in my head, I bladed the shot out of bounds, and posted a triple bogey.  Stay in the moment and focus on the shot in front of you.

2 – Play against the course, not the man.  Regardless of who you are playing against, you play against the course.  Hit your shot on your schedule, and don’t worry about the other guys.  Golf is about your swing at your ball, and anything that distracts from that focus is unwanted and nonproductive.