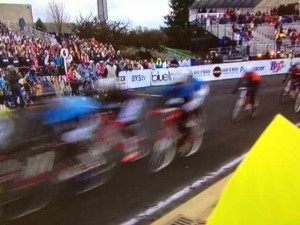 The bikes are supposed to go in circles. You don’t have to later that night.

it’s the World’s Greatest College Weekend in Bloomington, Indiana, and very little of what’s great has anything to do with one-speed bicycles that will be ridden in circles for two hours at Bill “Army” Armstrong Stadium as Indiana University students stare bleary-eyed at the colorful storm of fitness.

The Little 500 is a great diversion, but the race is a sideshow for the main event, which is thousands of college students simultaneously combusting in an alcohol-fueled frenzy.

I participated in this silliness until the futility became obvious, and then turned to writing about the exploits of my group of friends until that seemed equally preposterous.  Now, we turn our attention to distilling our vast array of experiences stretching the boundaries of stupidity into helping others make it to Sunday without an arrest or injury.  [If you want to read a fairly extensive chronicle of idiocy, click here.]

Parents hope their children are the outliers who choose to study rather than indulge in copious amounts of fruity-flavored poison, but most suspect otherwise.  If denial helps you get through, that’s fine, but I offer my services to the students who don’t know when to say when.

As a veteran of a great many of these weekends, I am in a unique position to offer sober counsel before the party starts to students so they remain the same person Sunday as they are today.

Here are the top 10 great pieces of advice for enjoying Little 500 Weekend:

10 – Pour your own.  It would be nice if you could trust that whatever is in the red Solo cup some Delt just handed you has only good and safe stuff in it.  Those days are over.  Not only do you need to pour your own, you need to hold your own.  Never put the cup down.  Keep it in your hand at all times.

9 – What’s the hurry, Murray?  Competitive shots or beer bonging every five minutes will do nothing but bring a speedy and messy end to your weekend.  Take your time.  Sip, don’t gulp.  Marathoners can’t sprint for 26.2 miles.  College parties might be the only races won be the slow and steady, especially Little 500 weekend.

8 – Host rather than guest.  A little late for this now, but… There is a downside to hosting a party – the cleanup and potential liability.  The upside is no travel and immediate access to your bed.  Advantage hosting.  If you host in a large apartment complex like Varsity Villas or the former Walnut Knolls, all the better.  No liability, and the cleanup is confined to a common area policed by the complex.

7 – Take five minutes an hour to recalibrate.  This is a lesson learned from Jerry Lewis as he hosted his Labor Day telethon.  Jerry would take five minutes an hour to rest.  On the day of the Little 500, you are hosting your own little marathon, and getting away for five minutes to breathe is relax is a great way to avoid going off the rails.  The toilet is a nice spot.  Sit, relax, breathe, review the past 55 minutes to make sure decisions made still pass a basic logic test.  Repeat every hour.

6 – Do not broker peace.  Playing Jimmy Carter between Menachem Begin and Anwar Sadat at Camp David always seems like a great idea until you realize that Begin and Sadat were smart and sober guys who wanted peace.  Two drunk guys squaring off in a bar is a interaction to avoid, and even worse is trying to compel a policeman to let your friend go as the handcuffs go on.  There is no surer way to get arrested than to represent for your friend who has earned the scorn of the Bloomington cops.  The best play during a bar fight is to down your beer and tell the bartender it spilled during the fight.  Free beer beats a wayward punch to the jaw.

5 – Keep your feet on the ground.  It’s odd the way college students love to tempt fate by jumping out second story windows onto mattresses, or sitting on ledges 20-feet off the ground. The easiest lesson to embrace as a college student often comes when some boob feels confident about an impossible acrobatic feat.  The leap is followed by the sickening sound of a cranium thwapping on concrete or asphalt.  Lesson learned cost-free for the witnesses.  Not so much for the gymnast wanna-be.

4 – If your friends go home, you go home.  This is a serious piece of advice.  Bad things tend not to happen to people in a group.  if you are at a party, and your friends suggest the night ends, end the night with them.  Never stay out alone, or migrate from a group of friends you can trust to a group of strangers because they seem fun.

3 – Take the smart phone, but resist the temptation to share the moment.  There are some days that should not be chronicled on social media for all to see, and if my memory serves, the Little 500 is one of them.  I haven’t been to a Little 500 in seven years, but if that day still evolves as it always has, it’s better for everyone if you trust your memory to capture the moments that you believe matter.  The reality is not going to be nearly as kind.

1 – Don’t be THE idiot.  If you look around a party this weekend, and no one is acting like a bigger dumbass than you, excuse yourself, and go to bed immediately.  Avoiding the cops is a lot like being chased by a bear.  You don’t need to be able to outrun the bear, just the slowest member of your party.  As long as you aren’t the biggest idiot, you’re only consequence Sunday morning will be a headache and case of advanced lethargy.

Have fun.  Enjoy yourself.  Just make sure you don’t damage your ability to enjoy tomorrow to the fullest.