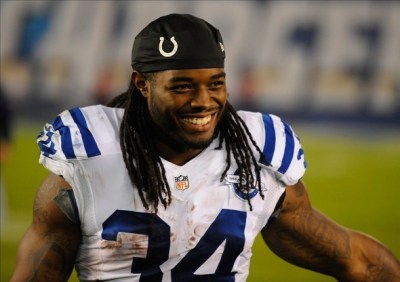 There aren’t a lot of smiles in Indianapolis when discussing the Colts trade for Trent Richardson, but there have been worse deals.

Indianapolis Colts general manager Ryan Grigson takes a lot of heat over the 2013 trade for running back Trent Richardson, and rightly so.  The deal was a complete bust.

That’s looking at it through the rearview mirror, which is a luxury afforded to critics.  On the front end, this appeared to be a pretty good deal for the Colts.

Steven Ruiz of the USA Today ranked the 32 NFL GMs in a post yesterday.  Grigson came in 28th overall, and next to last among non-newbies, in large part because of the Richardson trade.

I’m no defender of Grigson because of his liberal and scattershot use of free agents in building the Colts roster, but when the trade was made there were plenty of reasons to believe it was a smart move.

Here are eight reasons to give Grigson a pass on the Richardson deal:

8 – Who knew Richardson would eat his way out of the NFL?  Richardson was fat, and fat running backs have a tough time getting to the hole on time.  He was signed yesterday by the Baltimore Ravens after getting in shape again, but his voracious appetite for fatty foods was not a well-known detriment back in 2013 when Grigson pulled the trigger.

7 – Not even close to the worst trade in Colts history.  How about 1994 when then GM Bill Tobin traded to move up from the seventh overall pick to the fifth to take Trev Alberts?  The San Francisco 49ers used the seventh pick to take Bryant Young – a four-time pro bowler out of Notre Dame.  Maybe the rash of bad moves by Tobin makes criticizing him seem cruel, but if we are going to hammer Grigson over Richardson, delve back into the archives of the Colts franchise prior to Bill Polian’s run of shrewd deals to throw around “worst in history” when discussing Richardson.

6 – Combine measurements showed a borderline freak.  His combination of speed and strength doesn’t come along very often, but Richardson shows the fallacy of buying the hype created in Indianapolis during that pre-draft workout.  His 4.53 time in the 40-yard dash, 37-inch vertical, and 25 reps benching 225 lbs foretold potential greatness.  Too bad speed in eating multiple breaded tenderloins wasn’t part of the protocol.

5 – Trent was a well-rested beast at Alabama.   After starting only two games during his first two seasons for Nick Saban, Richardson became a very productive bell cow during his final season for the Crimson Tide.  He averaged 129.2 yards per game and scored 21 touchdowns.  He was also a mildly productive receiver out of the backfield with 29 catches for 338 yards and another three TDs.

4 – The Colts got a year worth of Richardson before the draft ever took place.  At the time of the trade, the Colts were in dire need of a running back to take pressure off second year sensation Andrew Luck.  Vick Ballard went down, and Grigson stepped up.  Sacrificing nothing from the current team, he made the deal to chase a championship with a player whose appetite for fatty foods was at that point unknown.  Trading for Richardson was a bit like buying a house with the first year of mortgages paid by the previous owner.

3 – The Colts got the better end of this deal.  The Browns took the 26th overall they netted for Richardson, packaged it with a third rounder, and traded up from 26 to 22 so they could take Johnny Manziel.  You want to talk about a terrible trade – or two – how about the network of trades the Browns made to acquire Manziel.  There aren’t many football players you would rather have than Manziel, but Richardson is just inside that window.  And the Browns not only dealt Richardson for the 26th pick, they dealt the 26th pick to the Eagles along with a third rounder to move up to grab Johnny Cuttysark.  For the record, the Eagles got bupkis out of their bounty from that deal.  To castigate Grigson for making a terrible trade when the partner got even less out of it is silly.

2 – Richardson ran for 950 yards as a rookie.  There was no reason to believe Richardson wouldn’t be able to find holes created by defenses worried about Luck, Reggie Wayne, and T.Y. Hilton shredding them.  The Browns had no such threat, so why wouldn’t Richardson be able to at least match his productivity enjoyed at the factory of sadness in Cleveland?

1 – Dominique Easley.  Four picks after the pick the Colts sent to the Browns, the Patriots drafted Easley, a defensive tackle out of Florida.  A week ago, Bill Belichick cut him.  is anyone attacking Belichick for blowing the 30th pick of the 2014 draft on a bust?  Of course not.  At least the Colts got a potentially solid running back for the 26th overall pick.  Belichick got nothing.

There are plenty of valid criticisms of Grigson, but the Richardson trade isn’t one of them.