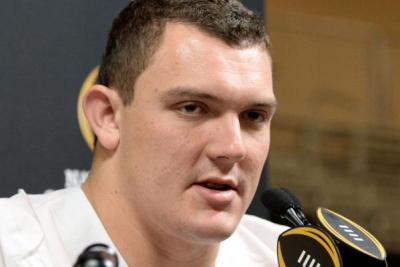 Colts did the right thing – not the brilliant thing – when they drafted center Ryan Kelly.

Indianapolis Colts general manager told us last night that Alabama center Ryan Kelly was the best player on their board, the player they targeted all along, and just happens to address their biggest need.

I’ll buy it because I like the pick – a lot.

Andrew Luck woke up safer this morning than he was yesterday, and that’s the key to the Colts championship dreams for the next decade.

This was both the right pick and the obvious pick.  How obvious?  On my radio show, all month we spoke to players who were projected to go to the Colts.  We replayed one of those conversations yesterday – the interview with Kelly.

I wasn’t certain the Colts were going to take Kelly, but I was sure his was the best interview.

This was the right pick for the Colts – for at least the following 10 reasons:

10 – Kelly looks like Art Donovan.  Some guys just look like football players – guys who could be plugged in during any era.  That Ryan Kelly looks a lot like the late Colts hall of fame defensive lineman Art Donovan speaks to the ease with which Kelly could be seen blocking for Johnny Unitas, Bert Jones, Jim Harbaugh, or Peyton Manning.

9 – He watched the draft from home.  Nothing against heading to Chicago for the draft, sitting in the green room, and awaiting your all-too-long, borderline creepy hug with NFL Commissioner Roger Goodell, but I like a guy who decides to hang at home with family and friends.  It shows a level of being grounded that suits a a guy playing a position like center.  Kelly enjoyed his achievement where those most important to him could serve as his spotlights.  And he avoided the potential ignominy of sitting alone at the end of the night like UCLA’s Myles Jack.

8 – Alabama sends NFL ready guys to draft.  Football in the NFL is different from college football, but programs like Alabama and Ohio State are about as close as it gets.  Drafting players from those two programs doesn’t ensure success (see Trent Richardson), but the chasm between playing for the Crimson Tide and Colts is not quite as severe as with other programs.

7 – Sometimes to best player on the board addresses a weakness.  The obvious answer can also the best answer, and it was last night.  According to people inside the organization, Grigson has been guilty in the past of building a board that showed how brilliant he is.  Football is a game that rewards diligence, not brilliance.  Grigson was smart last night instead of a genius – a big step in his development as a GM.

6 – Finally, there will be consensus as to who should play center.  Remember the rumors of arguments between Grigson and coach Chuck Pagano about whether the starting center should be A.Q. Shipley or Jonatthan Harrison?  Last year, neither Harrison nor Khaled Holmes inspired enough confidence to flat-out win the job.  The debate over who the captain of the offensive line will be has finally ended.  Kelly will be the guy.

5 – The Colts had never before drafted a center in the 1st round.  That’s a little more interesting than it is important, but the center position is critical, and why teams tend to dismiss the need for a great center is a little baffling.  The Colts need a guy to call the blocking schemes, and Kelly appears to have the intellect to get the calls right while having a body ready to defensive tackles.

4 – Peyton Manning and Jeff Saturday might have been the most important relationship on the great Colts teams of the 2000s.  A quarterback needs a center with whom he can walk through his career, and maybe Kelly can be that guy for Luck.  It’s worth the low risk roll of the dice on a solid guy and big body for a center.  Luck and Kelly just sounds right.

3 – Kelly is a “Horseshoe” guy.  When you talk to Kelly, you get an immediate sense of who and what he is – a confident football player who proves his worth on the field but understands how to behave off of it.  That’s a lot to surmise from an 11-minute conversation on the radio, but that’s what we do.  Not only did Kelly remind me of Saturday, he also evoked injured Cubs catcher/left fielder Kyle Schwarber, who went to high school just 19 miles from Kelly in suburban Cincinnati.

2 – Ryan Grigson now has a little cover.  I buy that Kelly was the guy the Colts targeted because he is going to help the Colts win more games than anyone else who was still available at #18, but had Grigson selected a non-offensive lineman and Andrew Luck got hurt again, fans with torches would have marched on the Colts facility.  Owner Jim Irsay would have kicked Grigson through the front door to appease the rabble.  Now, if Luck gets hurt, at least Grigson can say he used his most prized asset to protect him.

1 – Andrew Luck needs to be protected.  Speaking of protecting Luck, there is no more important variable in the success or failure of the Colts than Luck’s play, and if he can’t suit up, he can’t play.  Keeping him clean is the primary objective of all activity and conversation in the Colts front office and coaching staff.  Drafting Kelly answers a gaping need.  Now the question is whether right tackle Denzelle Good can anchor the his side of the line.  Just how confident the Colts are in Good will be evident through their activity in the second and third rounds tonight.