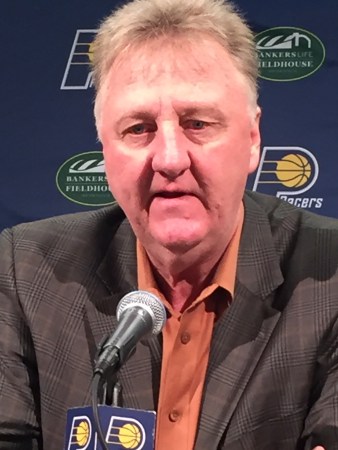 Larry Bird announces Frank Vogel will not return as coach of the Indiana Pacers.

Frank Vogel will not be the coach of the Indiana Pacers moving forward.  He hasn’t been fired because Vogel’s contract expired at the end of the playoff series with the Toronto Raptors.

The debate that began in earnest as Pacers president Larry Bird shared his thoughts on Vogel with the Indianapolis Star’s Gregg Doyel will now grow wings and fly; is the 45-37 record and first round playoff exit a product of team leadership (Vogel) or roster assembly (Bird)?

Obviously, Bird feels new leadership is needed as he continues to tweak and mold a roster he feels will be able to compete for a world championship – something this franchise has never experienced during its NBA era.

The press conference was fascinating – as are all appearances by Bird because lying and politicking don’t come easy to him.  He is blunt, conversational, and likable, even on a gloomy day like this.

Here are the top 10 takeaways from his press conference:

10 – The next coach will know there is a ticking clock on the gig.  Bird has been resolute since he was a coach for the Pacers from 1997 to 2000 that three years is about all the juice a coach has to hold the attention of a team.  Vogel made it through five-plus seasons before Bird recognized the need for a different voice.  The new coach will have a very clear notion that the timer is set to three years when he walks through the door, and with a little luck can extend his reign by another two seasons if the wind is at his back.

9 – Bird gave Frank the news over the phone.  I don’t like firing people over the phone.  Minus one instance not of my own creation, I have always told an employee goodbye face to face.  Bird choosing to do it over the phone is a little bit different because he is such a public figure, it would be impossible to go to Frank’s home – and do you really want to fire a guy with his wife listening in the next room?  Asking Frank to drive down to Bankers Life Fieldhouse would be equally unpleasant.

8 – This was a tough day for Frank, but also tough for Bird.  Bird appeared exhausted, and spoke of the difficulty of making the decision.  Even when an employee has screwed up and is being fired for cause, these are tough moments.  When a coach has performed well in so many realms – as Frank has – it’s brutal.  In fact, it’s so hard that there are times it should be done, but isn’t.

7 – List of candidates not complete.  Bird is pursuing a new coach one step at a time, and the first step was completed today.  Frank has been removed from the list of those who may coach the Pacers in 2016-2017.  Now Bird will work his list.  And he has a list.  Bird said he didn’t, but if he began thinking about making a change at the all-star break, he began building at least a mental list at that moment.  Letting Frank go isn’t (or shouldn’t be) about the removal of Frank but replacing him with a better option.  Interviews will follow, and the result could come at any time because Bird said he may hire the first one he talks to.

6 – Bird has been reading chamber of commerce pamphlet.  Bird took considerable time and effort in extolling the virtues of Indiana and Indianapolis as a home for a coach – right down to the quality of schools and health care.  He’s right, this is a very livable city, but the multiple references to Indiana’s wonders were worth noting if not downright odd.

5 – Idea for change came during all-star break.  Bird explained that he first thought of replacing Vogel at that time and the idea continued to nest until today when he acted on it.

4 – Frank tried to argue Larry out of making the change.  Bird shared that during the 30-minute conversation during which Vogel learned he would no longer be the coach of the Pacers that Frank tried to talk him out of making a definitive call until they were able to discuss it together.  This is always the impulse of a person being fired until they go through it often enough to know there is never a u-turn, and even if there is one, it’s never for the best because the over-arching issue that caused the manager to consider the move has not been fully addressed.  Vogel will get a job that pays him far beyond the $2.5-million the Pacers agreed to when his extension was negotiated.  In the end, Vogel will view this as a positive day in his life.

3 – Kevin McHale will not be next.  Bird was asked about McHale, the rumored top candidate, and responded that he would never do that to McHale.  What I took that to mean was that Bird would never be able to fire McHale, the end result for virtually all coaches who are hired.  Bird may have been lying here, but he sure seemed to be woundedly honest today.

2 – Players will not be consulted.  Bird said that he will not ask players for input as he builds his list and conducts interviews, and he is right not to.  There is a reason why 25 year-olds are not general managers in professional sports.  Seeing the big picture rather than what is good for them is not a strength for players who lack circumspection.  Owners own, managers manage, coaches coach, and players play.  When those lines are crossed, all hell breaks loose.

1 – Bird wants the Pacers to run, so the Pacers will run.  Vogel felt strongly that the best way for this Pacers roster to compete was to continue to play big and defend the rim.  Bird is a fan of going small and shooting threes.  In a battle of wills between team president and coach, guess who wins every time?  Whether Bird is right to jump on the small ball bandwagon will be seen beginning next season with the Pacers led by a coach who is in agreement with Bird.

Was allowing Vogel to leave the right move for the Pacers?  Each of us has our suspicion, but none – including Bird – will know for sure for a year or more.

One thing we do know, and Bird mentioned this many times himself, is that Vogel is a good man and a solid coach who will land on his feet on his timetable,

And he will be missed around here.