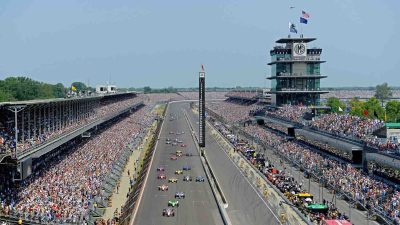 The Indianapolis Motor Speedway is enjoying it’s 100th May as the host of the Greatest Spectacle in Racing.

The Indianapolis Motor Speedway is one of my favorite places on the planet, and when May rolls around that is where I choose to work.

Because of technology, we can do my radio show anyplace we like with minimal tech support, so why not do the show from Jonathan Byrd Racing’s garage (B-20) everyday the track is open?

Sportstalk shows on other stations make occasional appearances, but we want to be there every day.  It’s not because it is somehow good for business but because I love the place.  Given a choice of sitting in a studio talking to myself and being at the Indianapolis Motor Speedway talking to drivers, engineers, and car owners, I choose Indy and I’m baffled why others choose not to.

Here are the top 10 reasons all of us should love the place:

10  – Donald Davidson and the Talk of Gasoline Alley.  There is one man whose unique and wonderful brain holds the stories, secrets, and statistics of the Greatest Spectacle in Racing, and he gladly spills them all over central Indiana during the show he has hosted each night in May prior to the Indianapolis 500 for nearly a half century.  Yes, the historian has now become as big a part of the history of the Indy 500 as the race itself.  For those who move to Indianapolis, an afternoon with Donald is a prerequisite for understanding just what is so special about the Month of May in Indy.

9 – Sid Collins spontaneous eulogy of Eddie Sachs.  In 1964, Eddie Sachs and Dave McDonald died in a terrible and fiery crash during the second lap.  Following the official notification of Sach’s death, Collins delivered an extemporaneous message that perfectly captured the emotions of the fans and those who knew Sachs.  It was a moment of grace for a broadcaster who had many.  Here it is – in its entirety:

“You heard the announcement from the public address system. There’s not a sound. Men are taking off their hats. People are weeping. There are over 300,000 fans here not moving. Disbelieving.

A race driver who leaves this earth mentally when he straps himself into the cockpit to try what for him is the biggest conquest he can make (are) aware of the odds and Eddie Sachs played the odds. He was serious and frivolous. He was fun. He was a wonderful gentleman. He took much needling and he gave much needling. Just as the astronauts do perhaps.

These boys on the race track ask no quarter and they give none. If they succeed they’re a hero and if they fail, they tried. And it was Eddie’s desire and will to try with everything he had, which he always did. So the only healthy way perhaps we can approach the tragedy of the loss of a friend like Eddie Sachs is to know that he would have wanted us to face it as he did. As as it has happened, not as we wish it would have happened. It is God’s will I’m sure and we must accept that.

We are all speeding toward death at the rate of 60 minutes every hour, the only difference is we don’t know how to speed faster and Eddie Sachs did. So since death has a thousand or more doors, Eddie Sachs exits this earth in a race car. Knowing Eddie I assume that’s the way he would have wanted it. Byron said “who the God’s love die young.”

Eddie was 37. To his widow Nancy we extend our extreme sympathy and regret. And to his two children. This boy won the pole here in 1961 and 1962. He was a proud race driver. Well, as we do at Indianapolis and in racing, as the World Champion Jimmy Clark I’m sure would agree as he’s raced all over the world, the race continues. Unfortunately today without Eddie Sachs. And we’ll be restarting it in just a few moments.”

8 – Those who paid the ultimate sacrifice in the pursuit of speed.  Forty-two drivers and 13 riding mechanics have been killed as the result of injuries suffered at the Indianapolis Motor Speedway as they tried to find a way to ride the razor’s edge between safety and peril.  It takes balls to climb into one of those cars, step on the accelerator, and trust the technology to hold the car to the asphalt.  Last year during practice, we saw cars spin and go airborne.  That no lives were lost was a testament to the safety measures developed because of the sacrifices made by those 55 men.

7 – Jim Nabors.  I know he’s not singing on race morning anymore, but somehow the guy who played Gomer Pyle on 1960s sitcoms became an institution at the Speedway as he sang “(Back home again in) Indiana” prior to 40+ Indy 500s.  He did it for the last time in 2014, and thousands of spectators wept.  That is how much this event – and that man – mean to Indianapolis.

6 – It never really changes.  Sure, there have been $92-million worth of improvements to the facility over the past couple of years including a new entrance at 16th and Georgetown, a new upper deck atop the grandstand, new HD screens, concession stands, suites, and restrooms, but the place is just too damn big and beautiful to change.  The visual DNA is remarkably similar to what it has always been since Carl Fischer built the place in 1909.

5 – Packing a cooler.  The Indianapolis Motor Speedway is capable of accommodating almost 400,000 fans on the Sunday prior to Memorial Day, but the logistics of feeding them and providing their beverages is beyond the intellectual capacity of entrepreneurs who have tried.  The alternative is for fans to pack a cooler.  If you go to a Pacers or Colts game, beers and sandwiches might set you back $70 per person.  Beers purchased at the Kroger will set you back 70-cents apiece and a fresh turkey sandwich can be constructed for another $1,80.  Spending $10 on food and drink at Indy would require a serious appetite.

4 – Speed and trust.  My God, those cars are fast, and one slight miscalculation headed into turn one of the first lap of the Indianapolis 500 could cause a life threatening catastrophe for many drivers.  To trust your fellow racers to the extent necessary to dive blind into that turn is unfathomable.  The Indianapolis 500 is a test of skill, but also a test of trust.

3 – The walk to the gate on race day.  For those who haven’t been here, the Indianapolis Motor Speedway is enormous – bigger than any facility you have ever seen, and the parking area outside the track is even bigger.  It reminds me of Las Vegas – not a building in Vegas, but the entire city.  As you walk down the strip in Vegas from Caesar’s to the Mirage, you can see the Mirage, but it never gets any closer, and getting there takes forever.  If you park in the Coke Lot outside the Speedway and hike with a cooler to a seat in Turn One, you are going to have to rest several times, and likely decide to lighten the cooler’s load a couple of times by consuming its contents 12-ounces at a time.

2 – Bravery of the drivers.  Drivers who finishes the Indy 500 on the lead lap will need to turn left very precisely 800 times, and the majority of those turns will be while moving at 230 mph.  They do it with the knowledge that hitting a small piece of debris can cause a potentially fatal spin into the wall.  It’s tightrope walking between two skyscrapers on four wheels.  And the drivers love it.

1 – History.  The Marmon Wasp piloted by Ray Harroun won the first Indianapolis 500 Mile Race in 1911, and since that day racing has been the dominating image of the City of Indianapolis.  There have been thrilling finishes, hideous crashes, moments of adversity being overcome, and Snake Pit insanity that have drawn together millions of people to enjoy a beautiful spring afternoon on Memorial Day weekend.  Every few feet, there is a reminder of a moment that brought together a community during times of war, peace, poverty, and largesse.  The Indianapolis 500 has been a steadfast partner of Hoosiers during a century of tumult.