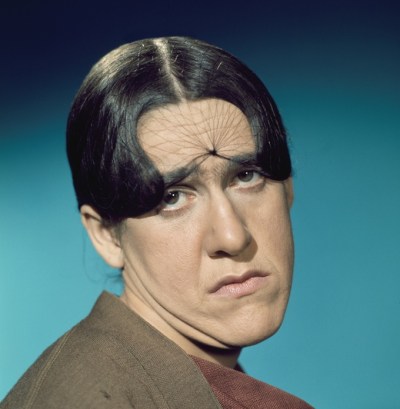 For those of you born before 1970, this is the character for which frequent 500 Festival Parade invitee Ruth Buzzi is best known.

Everything about the Indianapolis Motor Speedway makes imperfect sense.

The 100th running of the Indianapolis 500 is six days away, and while the race will be the star – as it always is – the traditions that have been built over the previous 99 Greatest Spectacles in Racing are a huge part of the fabric of the facility and incredible race.

It takes an afternoon to enjoy the Indy 500, but longer to fall in love with it – quirks and all.

Through your first couple of Mays in Indianapolis, you find yourself repeatedly asking, “Why do they do that?”  Nothing at Indy makes sense until suddenly it does.  Many of the traditions remain head-scratchers for lifelong fans, but that just enhances the fun if you allow it.

Here are 10 odd customs that you have either learned to embrace or decided to remain confused by.  This list might bring a little clarity – or baffle you further.  Like with everything at Indy – it’s your choice.

10 – The Bill Meck Award for Flawed Meteorology.  Okay, there isn’t any such thing, but there should be.  In 1998, Meck guaranteed the race would be postponed until Monday due to rain.  The race was run without a drop of rain falling after a 35 minute delay, and Meck was soon out of a job.  If you are a weatherman or woman in Indianapolis, you can be brash with your forecast 364 days a year.  Bets are best hedged on race day.

9 – Ruth Buzzi in the 500 Festival Parade.  Ruth Buzzi is a complete unknown to anyone under the age of 50.  Her celebrity was created during the run of “Laugh-In”, a sketch comedy show on NBC during the late 1960s and early 1970s.  She was most famous for portraying an elderly women who hit men over the head with her purse.  Inexplicably, she has ridden in the parade ever since.

8 – Insanely complex qualification protocol.  Don’t get me wrong, I love the qualifying procedures at Indy, but there is no questioning how uniquely complicated they are.  In NASCAR, everyone runs a couple of laps and they are placed in the grid based upon those speeds.  At Indy, every driver has to run at least two sets of four laps, but some drivers ran four times over the weekend to earn their spot.  It’s dramatic, fun, and impossible to explain in under two minutes.

7 – BYOB.  In most places, 400,000 really thirsty fans would be a cue for greedy profiteers to sell beer for $8.75 apiece.  Not at Indy.  Here, the powers that be invite fans to bring a cooler filled with anything but bottles.  The maximum size for coolers is 18-inches by 14-inches by 14-inches – enough to pack enough of whatever you need to sustain yourself throughout a long day at the World’s Greatest Race Course.

6 – The Talk of Gasoline Alley.  For a long time – I won’t say low long because it bothers the host – The Talk of Gasoline Alley has shared the history and anecdotes that make the Indianapolis 500 what it is – a completely unique event on the American sporting landscape.  The host is a former film projectionist from London who came to Indy because he fell in love with the event from afar.  Every night (minus the night before the race), Donald Davidson shares his knowledge and passion in a way so contagious that transplants like him feel like they witnessed each of the races and pole days since 1911.  Donald has become every bit the treasure as the event itself.

5 – Florence Henderson warbling “God Bless America”.  The actress and singer who gained fame portraying Carol Brady on “The Brady Bunch” (cancelled in 1974) has been a part of the Indianapolis 500 for decades, and in race jargon her voice is “a little loose”.  The steady erosion of tone has not dampened her enthusiasm for singing, nor the Hulman George Family from inviting her.  And so, another generation of race fans continue to ask the same question their parents did, “Who in the hell is that woman singing?”

4 – Cannon blast at 6a race morning.  The gates at the Indianapolis Motor Speedway open at 6 a.m. on race morning, and the message to allow fans to enter is not communicated electronically.  At Indy, they do it old school – with a cannon blast.  Sure, it wakes everyone up, including drivers who stay on the IMS grounds, but there is a simple genius conveyed by the cannon blast.  You can build a complicated system using fancy technical methods, or just fire a damn cannon.

3 – Live TV blackout in central Indiana.  Most of these traditions are quirky, harmless, and funny.  Asserting a local live television blackout of the most iconic and exciting annual sporting event in Indianapolis is serious and idiotic.  It has been proven often enough over decades of televised play-by-play that the marketing experienced via live TV coverage adds to the enthusiasm that leads to a robust gate.  Because of the live blackout, generations of potential IndyCar fans have been left unengaged.

2 – Jim Nabors singing “(Back home again in) Indiana”.  Fans are two years removed from the final performance of TV’s Gomer Pyle, but they still pine for Nabors’ return.  It makes no sense that a native of Alabama who gained fame portraying a filling station attendant in Mayberry, North Carolina before enlisting in a TV version of the Marines and finally retiring to a macadamia ranch in Hawaii could become beloved in Indiana.  But he did – and he is.  Thousands of Hoosiers wept as Nabors sang prior to the 98th Indy 500 in 2014.

One thought on “Top 10 beautiful, sweet, wacky, quirky, and ridiculous traditions for the Indianapolis 500”