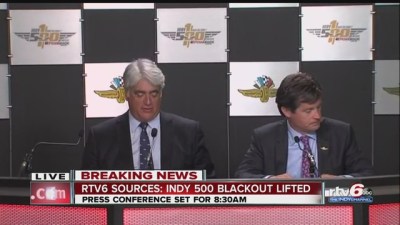 Mark Miles and Doug Boles announcing the ridiculous live blackout of the Indy 500 has been lifted because the race is a sellout. It should be lifted permanently because it’s idiotic.

As readers of this list learned yesterday, the Indianapolis 500 is replete with arcane, nutty, and charming traditions that make it one of the most unique events on the American sports calendars.

The local live TV blackout has not been not one of them.  It’s simply hasn’t made sense.

Local blackouts were embraced in the 1950s and 1960s as the equivalent of giving free milk to those to whom you would like to sell a cow.  But if people don’t know how delicious milk is, why are they going to buy a cow?

Every sports league, franchise, and single day event in America that I know of has suspended the employment of local blackouts – except the Indianapolis 500, which will celebrate its 100th running this Sunday.

Here are the 10 reasons the Indy 500 blackout should be permanent relic at the Indianapolis Motor Speedway Museum instead of an ongoing practice:

10 – If it isn’t live, it doesn’t exist.  Media consumers have grown wiser over the years, and as TV coverage of sports has exploded over the last two decades, they reject on principle the notion that recorded content is interesting.  This is increasingly true the younger the consumer.  To expect young people to sit in front of a TV to watch an event that took place seven hours before is absurd.  With every advancing year, the number of people willing to watch a delayed broadcast winnows because elderly consumers die without being replaced by equally gullible audiences.

9 – The delayed broadcast would still do monster numbers.  With 400,000 people who are only able to see half the track at best, and have difficulty following the action in the pits, there will be plenty of eyeballs for the replay.  There is no reason to disrupt the tradition of fans watching the race replay on RTV6 after getting home.  The track – and RTV6 – can have its cake and eat it too.

8 – The NFL ended it’s blackout rule.  There used to be a rule that if an NFL game was not sold out 72 hours prior to kickoff, the TV coverage of the game would be blacked out in the home market.  The NFL realized a prohibition on live TV did nothing but frustrate a fanbase motivated to consume its product.  That is bad business.  After many years of almost never blacking out a game, the NFL abandoned the rule.

7 – When the Chicago Blackhawks ended local blackout, seats filled at United Center.  The last year of the local blackout for the Blackhawks was 2006-2007, the team’s attendance reached its lowest point in recent team history with an average gate of 12,727.  When owner Bill Wirtz died prior to the 2007-2008 season, son Rocky Wirtz allowed home games to be shown in Chicago.  Attendance bounced up more than 4,000 delirious Chicagoans per game.  By the 2008-2009 season, the Hawks averaged more than 21,000 fans, and they have continued to every year since.

6 – What is the IMS afraid of? If love for the Indianapolis 500 is so tenuous that a blackout is necessary to ensure gate, it’s not nearly as cool to attend in person as I think it is.  The start and finish of the Indy 500 is the most exciting thing I have ever experienced as a sports fan.  I’ve been to a game seven of a World Series, been on the floor to celebrate a Duke National Championship, seen the Kentucky Derby, and dozens of other iconic events.  Nothing beats Indy.

5 – No one else does it – I mean NO ONE!  The Blackhawks were the final major league sports team to employ a blackout for local games, and single day events never blackout either.  None suffer.

4 – Kentucky Derby not blacked out – attendance surges.  Attendance has never been better at Churchill Downs the first Saturday in May in large part because of the media coverage of the most thrilling two-minutes in sports.  It looks like so much fun that people want to be a part of it.  That’s how TV and marketing works.  To willfully obstruct a willing audience from consuming an event is kooky.

3 – Generations have never seen the race live.  Because of the blackout, generations of fans in central Indiana have never seen the race live – or in many cases at all.  One of the coolest events in the history of our planet will be run for the 100th time this Sunday, and thousands of sports fans who live within 30 minutes of the Indianapolis Motor Speedway could not care less.  For fans under 40, if an event is not televised, it doesn’t exist.

2 – Live TV will boost attendance.  Kids see how cool something is, and they beg parents to take them there.  That’s why sports fandom is generational.  When I was a kid, I wanted to go to Wrigley Field because I watched home Cubs games on WGN.  Without WGN, I wouldn’t have known anything about Wrigley Field, and wouldn’t have pleaded with my Dad to take me there.

1 – The Indy 500 is a business event, but a civic celebration as well.  The Indianapolis Motor Speedway can accommodate roughly 400,000 fans on its property.  That leaves roughly a million people in central Indiana with no way to enjoy the race minus the unique and superb work of the team of broadcasters who call the race for the Indianapolis Motor Speedway Radio Network.  If the race aired live, just as with the Derby, there would be neighborhood parties throughout the area.  The 500 would expand its cultural footprint, not watch it decline.