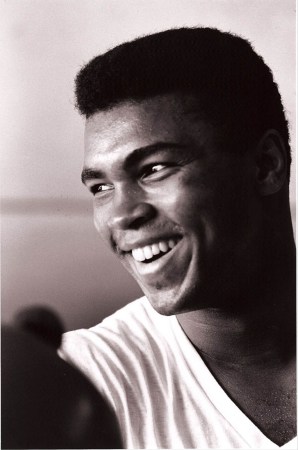 Muhammad Ali is impossible to describe to those who never saw him at his best.  No one looked like him.  No one acted like him.

Muhammad Ali was released two days ago from the body and mind that were taken from him long ago by the ravages of Parkinson’s Disease.

We remember and mourn him as a championship boxer and better human being whose beliefs drove his actions despite daunting repercussions that could have robbed him of more than the three years of boxing he lost during his prime.

There are icons in American sports, but atop that group stands Ali, a man whose contributions to our society are impossible to list or adequately describe.

Writing about Ali is a fool’s errand because no combination of words can be assembled to adequately describe either the fighter or man.

He was a beautiful and charismatic athlete in a brutal sport that welcomes neither, and a man whose spirituality and kindness seemed at odds with his day job.

Seven is a very important number in the Islam faith, so our list today of Ali’s great fights is limited to seven:

7 – Against the racism in Louisville.  Ali was raised Cassius Clay in Louisville, a city just across the Ohio River from the north, but a place with deeply rooted racism.  He gave blacks in Louisville a sense of pride and resilience that changed the city.  He gave whites a reason to question the idiocy of their prejudice.

6 – Against his own image.  Ali was hated by the majority of Americans for his resistance to the Vietnam War, but through diligence, humor, unwavering spirituality, and charisma Ali emerged the most popular athlete on Earth.  By the end of his career, he was beloved as one of America’s greatest sports heroes, and respected as a man of devout belief.

5 – Against time and Leon Spinks.  Following the win against Frazier, Ali defended his championship against a variety of lesser opponents with whom he could dominate and entertain.  Leon Spinks was 7-0 as a pro following his gold medal performance in the 1976 Olympics in Montreal when he signed to fight Ali.  A veteran of so few professional challenges, Spinks was thought to be short work for the champ.  Out of shape, Ali was beaten in a 15-round split decision.  The rematch seven months later was a different story, and marked the final time the 36-year-old Ali looked anything like the charismatic champ we remember.

4 – Against George Foreman in Zaire.  “The Rumble in the Jungle” was Ali’s greatest upset.  An 11-3 underdog, Ali laid on the ropes and dared the much bigger and stronger Foreman to bang away at his head and midsection for seven rounds.  Ali had lightning fast hands and feet, but his greatest – and most tragic – attribute was his ability to take a punch.  While Foreman exhausted himself, Ali waited and then attacked.  In the eighth round, Ali put together a vicious five punch combination that felled the giant.

3 – Against George Frazier the third time.  In 1975, both Ali and Frazier spent what greatness they had left in Manila in the greatest fight of all time.  The 14 rounds of brutality and bravery was mesmerizing.  When Frazier couldn’t answer the bell to start the 15th round, it was unclear whether Ali could have.  Between rounds late in the fight, Ali told his corner men, “This must be what dying feels like.”  Their sacrifice for our entertainment was both thrilling and appalling.

2 – Against Parkinson’s Disease.  For the last 35 years of his life, Ali was restricted to the movements and thoughts allowed by his affliction.  He continued to entertain and thrill with magic tricks and his very presence.  Very few human beings could dominate a room like Ali.  When he was in a building, you felt it despite his being mostly speechless and confined to a wheelchair.  Our prayers always begged that a man blessed with such eloquence might find a way to share his candid and sometimes funny wisdom with us one more time.  It never happened, but he fought with tenacity until the end.

1 – Against the Vietnam War.  Whether or not you believe the Vietnam War was a just investment of lives and wealth for the United States, you must respect those who opposed it on moral grounds.  It’s one thing to avoid war because of cowardice, but another entirely because of religious beliefs.  Ali had nothing to fear from combat in Vietnam as he would never have been deployed in that capacity.  Because of his refusal to be inducted into the military, Ali lost three years of his prime as a fighter and provider.  As we evaluate athletes who contributed to society, that sacrifice is unprecedented and could have been much longer.