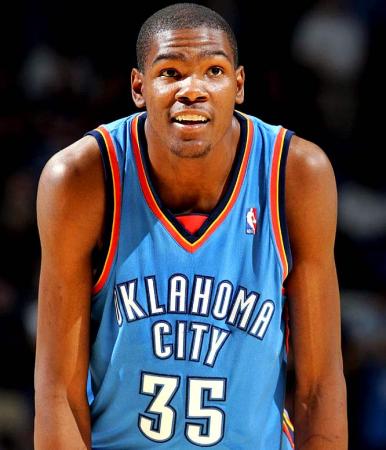 Kevin Durant turned his back on a city that loved him. That’s weak, gutless, and/or spineless?

Kevin Durant signing a two-year deal (the second is a player’s option) with the Golden State Warriors is being called “weak” and “spineless” by too quick to judge media types who don’t see the big picture.

The easiest play would have been for Durant to stay home and indulge his love for Oklahoma City, a place where he has spent the last eight years compiling a hall of fame resume’.  He could have signed an extension without opening an interview and bidding process where anyone would have been disappointed.

People would have seen Durant as loyal and true, and no one would have been disappointed.  Easy.  Risk free.  Criticism free.

Durant made the the tough choice.  He interviewed, evaluated, and chose the most perilous option – to contribute rather than star for the best in the west – the Golden State Warriors.

Here are the 10 reasons we should admire rather than criticize Durant’s decision:

10 – Decided to do what he wants instead of what everyone else wanted.  An entire city hoped and prayed that Durant would return.  Four others hoped he would choose them.  Durant disappointed all of them in favor of a town and fanbase that valued him least.  It would have been so easy to say yes to OKC.  Saying no was tough, not weak.

9 – Not sure whether this is gutsy or foolish, but going on vacation immediately after making this call without explaining his thought process on TV left media to interpret it for themselves.  Yes, Durant eloquently expressed himself in The Players Tribune, but how many people took the time to read it?  Far fewer than listened to ESPN’s resident bloviate Stephen A. Smith harangue the decision as “the weakest I’ve ever seen”.  Durant didn’t need a “Decision” type self-congratulatory show, but his face and voice might have created a better narrative.

8 – The Warriors don’t need Durant to win.  Durant will walk into training camp as the replacement for Harrison Barnes, not the franchise alpha male.  That is a different vibe for a player who has always been the best on his team.  He might recede to Barnes’ level of play as the Warriors fail to adjust to Durant’s greatness as Durant enjoys an environment where he can be one of five, rather than THE One.

7 – With the Clippers, Durant would have been seen as shrewd.  Athletes view Los Angeles as a branding mecca that can launch media or entertainment careers.  Had Durant signed with the Clippers, a championship wouldn’t have been as necessary to validate the decision as a cameo in the next Judd Apatow movie.

6 – If Durant suffers another injury, lack of longterm deal might be costly.  Durant is unlikely to need a short-term loan to pay bills during his lifetime, but he could still forfeit $100-million in earnings if he suffers a catastrophic injury during the upcoming season.  No matter how much cash you have in the bank, risking $100 million is gutsy.

5 – In Boston, Durant would have been a piece in an incomplete puzzle.  The Celtics would have taken a step forward in talent by landing Durant, but not to the level anyone would have expected them to beat the Cleveland Cavaliers.  Lower expectations equals lower risk.

4 – Durant was a statue player in OKC.  His rookie year was spent in Seattle, but Durant became synonymous with a city bereft of any sports image other than the one he provided by default during eight seasons there.  Had he remained with OKC, his number would have been retired and his image immortalized in bronze in front of Chesapeake Energy Arena.  He is not a statue guy anymore in OKC, and will never be that in Golden State.

3 – Two words – Albert Pujols.  During more then a decade in St. Louis, Pujols was an iconic player for the Cardinals.  People there were starting to murmur that Pujols might be a superior player than the great Stan Musial.  After the 2011 season, Pujols decided to test free agency, and the Los Angeles Angels wowed him with a massive 10-year deal.  Off he went, and with that decision went his greatness.  Pujols has been good in Cali, but has never reached the level of generational stupendousness he enjoyed with the Cardinals.

2 – What if Oklahoma City wins at a higher level?  This is a real longshot, but what happens if the Thunder eclipse their 55-wins from last season?  Durant will be seen as a less than integral part of the Thunder’s success.  Michael Jordan left the Chicago Bulls after the 1992-1993 championship, and the Bulls won just two fewer games in 1993-1994, so it’s not unprecedented that a player like Durant is replaced quite adequately.

1 – Durant MUST win with Warriors.  Without Durant, the Warriors won 73 games in the regular season and lost in the NBA Finals to the Cleveland Cavaliers in seven games.  If the Warriors don’t win the title this season, Durant will be seen as a net negative for the Warriors, and damage will be done his brand as one of the top three players in the NBA.  In order to be seen as a force for good, the Warriors will need to win 70+ games and a title.  That’s a lot of weight to carry for all the Warriors, but especially for Durant.

One thought on “Top 10 reasons Kevin Durant’s signing with Warriors was gutsy, not “weak” or “spineless””