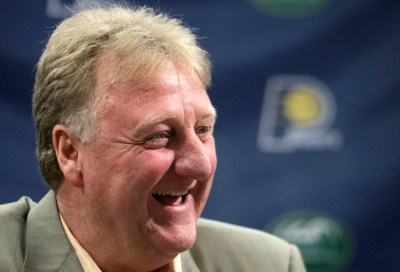 Larry Bind has had several reasons to smile this offseason, and hope for more beginning in late October.

The Indiana Pacers have enjoyed an offseason of under the radar activity that improved the team marginally with every stroke.

Kevin Durant generated headlines by leaving Oklahoma City for Golden State, but the Pacers have built a team better suited to playing winning basketball compared to last year’s version.  In fact, they might emerge from this offseason as the most improved team in the NBA.

They also might collapse and burn if the deals and coaching change don’t work out, but there are plenty of reasons to feel very bullish about this reconstituted Pacers roster and coaching staff.

This isn’t a championship team, but after evaluating the signings, trades, and coaching change on the front end, it’s hard to make a case for a backslide if the Pacers stay healthy.

10 – Jeff Teague replaces George Hill as point guard.  This looks like a bit of a push except that Teague (28) is in the middle of his prime while Hill (30) is preparing to exit his.  Hill has always been a solid defender and capable offensive threat, but his lack of consistent aggression on the offensive end hampered the Pacers attack.  Teague will have no such issues.  He has always been a clever attacker.

9 – Only the Celtics have improved along with the Pacers in the East.  The Celtics added Al Horford through free agency and Jaylen Brown with the #3 overall pick in the draft, and lost virtually nothing.  The rest of the East either unraveled (Bulls, Heat, Hornets, Hawks) or treaded water (Cavs, Toronto).

8 – Every move has made the Pacers marginally better.  George Hill for Jeff Teague isn’t going to win an NBA Championship, and neither is the 20th overall pick for Thaddeus Young.  Signing a pair of 31-year olds in Al Jefferson and Aaron Brooks (signing is rumored right now) to replace Ian Mahinmi and Ty Lawson isn’t going to put the Pacers over the hump.  In the aggregate though, those four moves are going to make make a 45-win team more competitive with the upper echelon of the East.

7 – Paul George will be an Olympian next month.  Playing among and against the world’s best may help George’s game pop to another level.  Being surrounded by excellence will either confirm in George’s mind his own excellence or motivate him to reach it.  George is no longer simply “a Pacer”, he is “THE Pacer”.

6 – Frank Vogel needed to go for Bird to assert his vision.  Replacing Frank Vogel was about philosophical differences between Pacers president Larry Bird and Vogel, not some silliness about a three year window for communicating with a roster.  it was clear from the media day press conference last season that Bird and Vogel were singing from different hymnals.  If Vogel wanted to remain as head coach, his Pacers needed to win enough to make replacing him appear ridiculous.  Bird wants the Pacers to run, and run they will.

5 – Stable no longer equals wins.  It used to be that multiple moves during the offseason showed a lack of stability that resulted in a setback for a franchise.  With the salary cap exploding and virtually all teams rebuilding on the fly, the Pacers are one of the more stable teams despite two new starters, a new coach, and at least three new second unit members.

4 – Pacers were already (kind of) successful.  Forty five wins and a near upset of the Toronto Raptors in the first round of the playoffs was a pretty good result for a team with Ian Mahnmi, Jordan Hill, and Solomon Hill playing major minutes in the front court.  After five major moves this offseason, the Pacers appear ready to take a step or two forward.

3 – No learning curve for Nate McMillan.  With many coaching changes, the new guy has to form relationships with every member of the roster.  McMillan has been a member of the Pacers coaching staff since Brian Shaw left to become the head coach of the Denver Nuggets, and he knows his way around Bankers Life Fieldhouse and the Pacers.  He knows already what the players do well and how they are best used.

2 – Al Jefferson will be productive and a mentor.  At 31, Jefferson is young enough to still have some athleticism and wise enough to get the most out of it.  That’s good news for Pacers fans when he reports to the scorer’s table, and even better news as Myles Turner evolves into a functional adult in the NBA.

1 – The collective might be greater than the sum of the parts.  Let’s be honest, for the Pacers to win at a meaningful level, the collective will need to be greater than the sum, but with Paul George as the alpha talent the Pacers have a chance to be competitive in the Eastern Conference.  A second unit of Aaron Brooks, Rodney Stuckey, CJ Miles, Lavoy Allen, and Al Jefferson is potentially as good as any in the NBA.