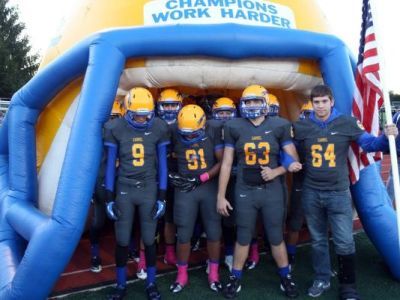 Those four young men leading Carmel’s team out of the giant inflatable helmet will look at each other in 40 years and be transported back to that moment and others like them.

The lessons of high school football will be shared, and the ever-increasing level of competition in the area will be extolled.

It’s truly a great game, and while the magic of winning and the glory of achievement are certainly a part of the equation in football, none of that has to do with the best reasons to be a part of this game on a team of friends.

The season will begin a month from tomorrow, but the work not only has already started – it never really ends.

10 – Presents an environment where authority must be respected.  Adolescents have occasional difficulty embracing the concept that they don’t know everything, and football coaches have a very efficient way of communicating the need for respect and penalizing those who do not comport.  High school football is great aversion therapy for those who believe showing you are smarter than a boss is a good strategy for getting what you want.

9 – Mandates at least a modicum of academic focus.  Similar to college, high school athletes need to maintain a minimum academic standing in order to compete.  That threat of being unable to play is sometimes the difference between relative success and failure in the classroom.

8 – Brand building.  It’s never too early to begin the process of building your professional brand. Depending upon your high school, playing football in front of potential bosses is a good way to lay the ground work for a successful career.

7 – Football is a good motivator for fitness.  Sometimes we need a kick in the ass to do what’s necessary to maximize the physical gifts God gave us.  Preparing to represent your school, compete as part of a collective of friends, and put your body in harm’s way are usually sufficient motivators to run, lift, and push ourselves to the limit.

6 – Football resembles a business and provides a little early insight into multi-departmental companies.  Offense, defense, and special teams contribute to football team success, and there are position groups within each.  That’s very similar to the organizational flow chart for most businesses.  Football players have an understanding of how they fit into the unit, and have empathy for the rest of the contributors/employees.

5 – Nothing like a Friday night in the Fall.  There is something incredibly cool about Friday Night Lights.  The media coverage and school pride involved on each of those nights is completely unique, and there is a sense that you are in the center of the universe in those moments.  Once you have experienced the change of seasons through the prism of a football season, Fall is never the same.

4 – Concept of pain versus injury relentlessly demonstrated.  Remaining functional despite pain is a fact of life in football as it is in no other sport.  Sprains, cuts, twists, bites, and bruises can all be overcome, and football players have to.  Pain free football doesn’t exist.  It’s good to know that unless there is a serious injury, people are capable of overcoming pain for the common good.

3 – Understanding concept of team.  As in no other sport, football relies on collective execution for success, rather than individual excellence.  In baseball, a pitcher can carry a bad team to a win.  In basketball a very tall player with off the chart athletic talent can lift a team.  Even with a a great quarterback, if the receiver doesn’t catch the ball or the offensive linemen don’t block, the play fails.  With all respect to Norman Dale in Hoosiers, football rewards all pistons firing in unison unlike any other game.

2 – Facing controlled adversity.  Life is going to present challenges.  That’s true for all of us.  The fun of our existence is in answering the daily challenges in our homes and office.  Playing football provides a wonderful incubator for finding a way to forage thru a forest of challenges to find success on the other side.  Other sports provide similar environments that inspire fight or flight, but the penalties for failing to prepare sufficiently in football are a little more severe for individuals and teammates.