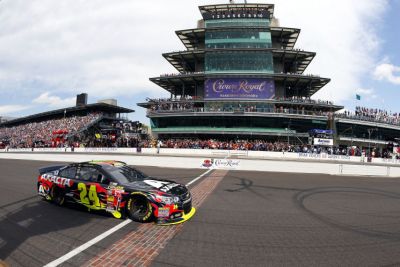 Jeff Gordon was thought to have won his final Brickyard 400 in 2014. Not so fast!

The Brickyard 400 used to be an event that rivaled the Indianapolis 500 for local excitement.  It was different – slower – but still fun.

Then came the mandatory red flags because of tire wear, and an admission by NASCAR that the nine-degree banking of the corners at the Indianapolis Motor Speedway are not conducive to passing.  The result was more parade than race.

But there have been moments of grace at the Brickyard 400 that resonated with fans.  Seven combined wins from Hoosiers Jeff Gordon and Tony Stewart were a big deal, as were occasional runs that were compelling.

This weekend’s race will galvanize interest throughout the state in a way that it hasn’t since the mandatory red race, and fans will have plenty of reasons to enjoy another day at the landmark that defines our city and state around the world.

Here are 10 reasons to join the throng at the corner of 16th and Georgetown for a weekend of racing, music, and fun:

10 – Tickets are reasonably priced and still plentiful (or what the hell else is there to do?).  Lots of tickets at $40, and they will likely be lower through secondary markets.  If you know anyone in Indy, you can probably get a hold of some freebies.  There are tickets at Stub Hub for $25 right now.  When you consider the concessions savings by packing your own cooler, this is a cheap day of fun regardless of ticket cost.

9 – Late start might mean cooler temperatures.  The green flag is scheduled to drop at 3:19 p.m., so the shank of the day will be behind us as the race begins.  The race itself will likely take three hours, so steering clear of the sun should be relatively easy depending upon the location of your seats.  Sunday’s high is supposed to be 90, but by the time the checkers flies the temperature should be in the 80s.  This isn’t so much a reason to attend, as the lack of a reason to avoid attending.

8 – The race itself might be interesting regardless of the Gordon/Stewart angles.  it’s been awhile since the Brickyard 400 was worth investing three hours of attention – plus travel time – but maybe this set of cars, drivers, and conditions will cause some high drama.

7 – People watching.  Ain’t nothin’ like a NASCAR race for checking out the fashions of America’s sub-elite, a group of which I am a card-carrying member.  Are mullets coming back?  Hell, among this group they never left!  How many women wear calf high red leather cowboy boots when the heat index hits 115?  Less than 35% would be a disappointment.  How long can a group of friends stay awake and non-violent when they start drinking shots of George Dickel at 7:30 in the morning?  No better place to find out than the Brickyard!

6 – Pack your own coolers.  After peeling off significant cash last weekend while enjoying a Cubs vs. Rangers game at Wrigley Field, it will be nice to pack a cooler with food and beverages purchased at a reasonable price from the Kroger.  It doesn’t have to cost $500 for a family of four to enjoy a beautiful day at a cool event – and at the Brickyard it doesn’t.

5 – Traffic should be comparatively light.  Getting in and out of the Indianapolis Motor Speedway as one of 350,000 fans who attended the 100th running of the Indianapolis 500 wasn’t too difficult.  The yellow shirts were pleasant and accommodating, and we were able to get from the northeast side of Indy to he bern in turn three in under an hour and a half.  In a facility built to handle nearly half a million, getting in, out, and being comfortable in between among a paltry 100,000 should be a no-brainer.

4 – Kid Rock.  Few entertainers work a crowd like Kid Rock, and in front of 80,000 NASCAR fans on the concert stage at the IMS Saturday night, he should be immersed in his element.  Who better to celebrate on a steamy hot Summer night than Kid Rock as he sings “All Summer Long”?

2 – Tony Stewart’s final Brickyard 400.  Smoke was born in Indiana, grew up in Indiana, and continues to live in Indiana.  He cut his racing teeth on Indiana dirt tracks, became a nationally known open wheel driver at the Indianapolis Motor Speedway, and now will run his last Brickyard 400 as he chases his fourth season championship and third win at Indy.

1 – Jeff Gordon’s last roll at Indy.  The bad news is Dale Earnhardt Jr., one of the most popular drivers in NASCAR, will not run the Brickyard because of lingering concussion symptoms.  But the good news outweighs the bad – at least in Indiana.  Jeff Gordon, who spent part of his childhood in the Hoosier State will come out of retirement to run the Brickyard, and might win his sixth.  That news turned an ordinary race into an event – and that is what the Brickyard 400 used to be.