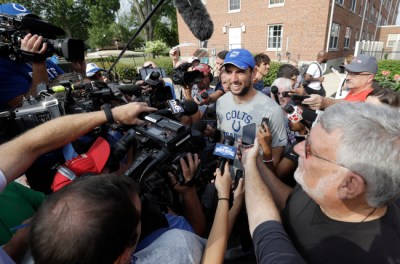 Andrew Luck faces a media throng as he arrives in Anderson for his fifth training camp.

A Super Bowl championship would surprise the experts, but not the Colts themselves.  At least that’s the vibe the Colts communicated yesterday during their first media availability at Anderson University.

The quotes flew from players about leadership, expectations, and their love of football.

There were two major stories – Art Jones took responsibility for his stupidity in using a banned PED, and Luck being relentlessly praised for taking another step forward as a leader for this team.

A year ago, the 2015 season looked like a parade to a coronation.  That parade took as sharp a left as the Faber College homecoming parade in “Animal House”.

This year, no one is quite sure what to make of the Colts – other than the Colts themselves.

These quotes from Colts players and coaches yesterday show a drive not unique to NFL teams as they report to camp, but certainly reveal a sea change in attitude and maturity

Here are the top ten:

10 – Wide receiver Donte Moncrief on missing OTAs and minicamp because of a toe injury – “It killed me every day seeing those guys go and I just wanted to rip that boot off.”

9 – Safety T.J. Green, who might be asked to play a bigger role with Clayton Geathers injured – “I think I have really grown from the day I stepped through the doors. My knowledge of the playbook has really got on a high level so I feel like I can go out there and play fast, not think too much.”

8 – Left guard Jack Mewhort on Andrew Luck taking a bigger leadership role – “I think he’s taken more ownership. I believe that happens with every football player as they get older and older and get more years under their belt. It’s been really good this offseason to see him become more vocal. He’s a natural born leader but to see him take more steps in that is great.”

7 – Andrew Luck on what he expects of his Colts – “As far as expectations internally, it’s been the same since I’ve been a rookie here.  This is a winning franchise. You find a way to win the playoffs and give yourself a chance to win the Super Bowl.  That’s always been the expectation, no matter if you’re picked 1st, 32nd, or anywhere in between.”

6 – Defensive lineman Art Jones explaining and apologizing for his suspension for PED use – “Obviously it’s not how I wanted to start my camp. You know, I did a piss-poor job going through my supplements and making sure there wasn’t a banned substance in there.”

5 – Ryan Kelly on establishing himself as a leader – “Playing center, obviously you have to have a sense of leadership. You have to control those four guys around you and the entire offense but at the same time, I think you have to establish yourself as a good player and kind of walk the walk before you can say stuff as a leader.”

4 – New quarterbacks coach Brian Schottenheimer on Luck’s intelligence – “You hear how smart he is, but you really don’t realize until you’re in the room and you’re around him how truly smart he is.  I don’t mean just smart in terms of knowing plays, but how he sees things. He’s got unbelievable football IQ.”

3 – Luck on his love for training camp – “Camp’s awesome.  I had a coach once explain camp is like a second Christmas and it certainly feels that way.  It’s ball all day. You don’t have to think about anything. You can wear the same clothes two weeks in a row and no one’s going to judge you…until you start smelling and someone tells you that you smell.”

2 – Jones on his focus for the upcoming season – “I’m on a mission. I’m sticking with my mission and that’s to come here, dominate and play at a high level. I apologize to the organization, more importantly my teammates and the fans and I appreciate all their support. It’s a small thing that I got to get through, but I’ll get through this. When October comes, I’ll be fresh, healthy and ready to dominate. You better believe that.”