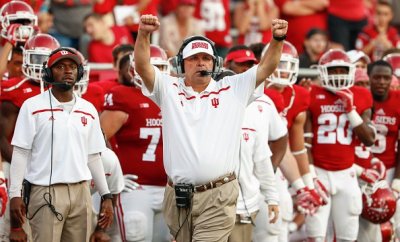 It’s taken some time, but Kevin Wilson appears ready to lead Indiana to the next level.

No undergraduate student on Indiana University’s campus was alive the last time the Hoosiers went to a bowl in consecutive seasons.

So did Indiana coach Kevin Wilson lose his mind/slip a cog/have bubbles in his think tank when he boasted about the potential for his sixth IU team during Big Ten Media Day?

Not so much.  For the last three seasons, there has been a shift in both the expectations and production of the Hoosiers.  Recruiting continues to progress, culture evolves toward and beyond competence, and confidence has replaced correctly invested doom and gloom.

Here are the 10 reasons Indiana fans should be guardedly excited about the Hoosiers:

10 – Senior-laden offensive line.  Four seniors will start on the line, including Dan Feeney, who passed up a chance to start his NFL career a year early to ride the wave that has been building in Bloomington since he arrived.  Experience doesn’t always foretell greatness, but given the overall high level of play by this unit as they opened holes for Tevin Coleman and Jordan Howard, and how they kept Nate Sudfeld mostly clean, it’s a good sign that so much experience is back.

9 – Nebraska is Indiana’s homecoming opponent.  Teams like to win their homecoming game each season.  That’s why so many used to play IU as their homecoming game.  Nebraska has been down for a few years, but to think that Indiana could ever come far enough to play Nebraska as a homecoming game is a little crazy.  Now, Indiana is going to have to win this game to justify the faith invested in them by the IU Athletic Department, but it show some swag to play someone other than Minnesota or Northwestern for homecoming.

8 – Devine Redding can run too.  Succeeding Jordan Howard and Tevin Coleman as Indiana’s bell cow running back will be a challenge, but given the success of Coleman, who put together the best single season in program history in 2014, and Howard with the 11th best season in 2015, expectations are high for Redding.

7 – It beats cynicism.  This is about attitude more than reality, and that is what July and August are for.  Why not be optimistic until proven otherwise.  No one is saying that Indiana is going to the Rose Bowl, but embracing the sense of impending decent football is an indulgence I choose to allow myself – until proven wrong.

6 – Year six of Wilson era.  Bill Mallory was the last Indiana coach to earn a sixth season, and that was a generation ago.  Continuity brings comfort, and comfort brings success.  Athletic Director Fred Glass felt strongly that Wilson was the right guy when they first met during the search to replace Bill Lynch, and that feeling has been validated bit by bit over the first five years.  Wilson has come into his own, feels a sense of belonging, and the program is responding.

5 – Richard Lagow.  He’s a 6’6″, 240 lbs. prototype who appears to be the heir apparent to Nate Sudfeld.  Lagow is impressive in interviews, and threw the ball very well at Cisco Community College after transferring from Oklahoma State.  He was ranked by ESPN as the top pocket passer in junior college.  He has weapons and an offensive line that should be able to give him time.

4 – Kevin Wilson’s rhetoric.  At Big Ten Media Day, Wilson said, ““We’re going to be very exciting on O. Everybody pretty energetic on defense. You guys make sure you keep the TV turned on because it’s going to be a lot of fun watching the Hoosiers play.”  He also spoke of knocking the door down in the Big Ten East.  No Indiana coach since the wacky Lee Corso has ever said anything like that with a straight face.  Sure, the Hoosiers have to back it up, but it’s good to hear a coach not apologize for Indiana being Indiana.

3 – Tom Allen.  Talk to the Hoosiers new defensive coordinator, and you feel like hitting someone.  He has an infectious energy that would translate into business management very nicely.  The Hoosiers will not be a “bend, don’t break” defensive unit.  They are going to hit people – hard.  Defensive football is more complex than “see ball, hit ball carrier hard, pick up ball”, but keeping that caveman attitude is important.  I’ll believe in the promise of a competent Hoosier defense when I see it, but I’m convinced opponents are going to feel it when they play IU.

2 – Schedule is favorable – as it can be.  Life is tough in the Big Ten East.  Indiana has to play Ohio State, Michigan, and Michigan State every season.  Life is a little less tough during the other weeks when they play Maryland and Rutgers, and of course the Bucket Game against Purdue.  Those three wins, coupled with three w’s in non-conference play against Florida International, Ball State, and Wake Forest should take the Hoosiers to a second straight bowl for the first time in more the 20 years.

1 – Wilson’s new found comfort and calm.  I mentioned this in #7, but the 2016 version of Kevin Wilson is substantially different from the guy who came to Bloomington in late 2010 when  Wilson was easily agitated, irascible, and occasionally petulant.  He has evolved beyond his insecurities to display his sense of humor, smarts, and leadership.  A few years ago, you had to look beyond the veneer to like Wilson.  Not anymore.