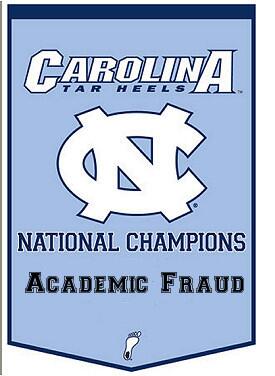 Student-athletes at the University of North Carolina were enrolled in classes that awarded excellent grades without requiring any work.

That is academic fraud.

Because of fancy lawyering by those representing the school, the NCAA will likely look the other way, and that’s too bad for the athletes who are promised an education in exchange for the prestige and cash they brought UNC through their excellence on the court and gridiron.

The arcane bickering the university proffers to obfuscate and delude is not important or worth your attention.  What matters here is that young men who were (and are) banned from monetizing their images or being paid as employees because the education they receive is plenty, were denied the very education they were promised.

And the NCAA will likely do nothing because academic fraud of this type is likely rampant among many member institutions.  Those schools use athletics as a marketing tool that primes the applications pump as they prospect for the next generation of children with parents well-heeled enough to stroke ever increasing checks for mostly useless sociology, finite math, and T-com classes.

College sports are a wonderful diversion.  Young men and women who are students run, jump, throw, and shoot for the love of the game – while coaches and administrators who trumpet the majesty of amateurism while filling their pockets with the cash earned by student-athletes’ efforts buy second homes and a big boat.

I’m willing to look the other way a little bit, but not for enough to embrace the full-fledged fraud by the University of North Carolina.

Here are seven reasons you shouldn’t either:

7 – The only reason student-athletes are not paid is because the adults don’t want to share.  College football and men’s basketball programs are among the very few businesses where employees go unpaid for their work.  Forget all about the wonders of amateur athletics, selfishness drives the economic decisions by schools like UNC, who claim a flawed – or non-existent – education is enough for their efforts.

6 – There are some schools that take academics very seriously.  Notre Dame announced this morning that Alize’ Jones, a sophomore who would have started at tight end, will miss this season.  An apology written by Jones leads many to believe it is because of an academic issue.  The Fighting Irish have been unwavering in their willingness to suspend or expel athletes for academic transgressions.  This UNC fraud doesn’t happen everywhere.

5 – The loudest boosters and grads at UNC just don’t give a damn.  Read the vitriolic replies to posts and tweets asking for some measure of consequence to be meted out in this mess, and you get the clear view that college football and men’s basketball fans at UNC care only about winning, and that it was Rashad McCants athletic excellence that led to the 2005 NCAA Tournament win for the Tar Heels that matters to them, not the well-being of McCants the human being, who was encouraged to enroll in shadow classes to retain eligibility.

4 – Mary Willingham told the truth, and was pilloried.  Stand up for students, but against the cash flow of the athletic department and life becomes difficult.  Willingham, a UNC athletic academic advisor who loved her job, was marginalized and ultimately fired for not walking the Carolina Blue line.  She outed the practice of completing work on behalf of students and admitting athletes incapable of answering the academic challenges of UNC.

3 – The NCAA needs to represent the best interest of the student-athletes, not the schools.  To understand the problem, you need to know that the NCAA is a member institution comprised of the schools they are tasked with overseeing.  The NCAA is not some independent arbiter that exists for the good of the athletes.  If the schools are incapable of understanding their correct roles in the lives of athletes, someone needs to be in a position to teach them.  If not the NCAA, who?

2 – The university should be there for the kids, not the other way around.  In some schools – and it certainly appears UNC is among them – and with some coaches, the construct and mission of higher education has been flipped on its head.  In those places and with those coaches, the student-athletes are there for the adults, who earn millions because of their athletic prowess.  Academics in those places are a distraction from the task at hand, which is winning.

1 – If a degree is the comp plan for competing, it should stand for something.  Millions and millions of dollars pour into athletic departments of the Power Five conference schools, and for their trouble, athletes net an education – or they should.  North Carolina passed kids along, awarded Dean’s List status, and conferred degrees upon student-athletes whose work was done in large part by others – when it was required at all.  That is according to athletes like McCants who helped win a National Championship for UNC’s lauded basketball program.

The entire sordid affair is only being compounded by the Tar Heels endless bickering and posturing.  Their assertion that the NCAA has no jurisdiction over academic affairs is clever, convenient, and perhaps even legally accurate.

But it is also amoral and a distortion of the systemic problem that existed within UNC Athletics, according to reports.  Denials in legalese are beneath the mission of any university or college.

UNC should be bigger than this.