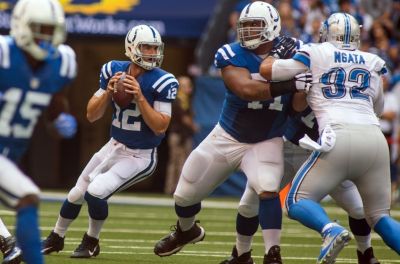 The Colts lost to a bad team yesterday, but it’s early in a season that will answer a lot of question through the next three months. No need to jump the gun.

Yesterday’s Colts game was disappointing.  Losing to the Detroit Lions 39-35 in a home opener isn’t a disgrace, but it’s certainly not a result that excites a fanbase still mired in a hangover after a miserable 8-8 2015 season.

There was some good, but it wasn’t enough to beat a team expected to finish third in the NFC North – a team led by the coach who was replaced by Chuck Pagano, a team without an elite, well, anything, a team that the Colts need to beat if they are to be taken seriously as a playoff threat.

As the Colts head to Denver for a showdown with a defensive front that ravaged Carolina Panthers quarterback Cam Newton on opening night, there are questions, a lot of questions, about the Colts ability to effectively compete throughout an entire season.

But here are some questions it is way too early to ask about the Indianapolis Colts:

10 – Are Lions running backs Ameer Abdullah and Theo Riddick the second coming of Ickey Woods and James Brooks?  Abdullah and Riddick ran through the Colts defense for enough yards to earn bonus cardio points on their Fitbits.  Each accounted for more than 100 yards in rushing and receiving combined as the Colts seemed to have grave difficulty tackling either.  Both are nice players, but neither are thought to be headed to Canton.

9 – Does Chuck Pagano understand timeouts can be taken with the play clock at :01?  Pagano took a timeout with 1:15 left in the game and :38 on the play clock that allowed the Lions to conserve their own timeouts – assuming they would have called one.  Either way, :37 (the time left when the Colts scored what should have been a game-winning touchdown) was way too much time to leave an opponent while clinging to a one-point lead.  Organization and a calm mind are required to win close games.  Chuck’s mind was cloudy, especially when explaining the timeout during his postgame press conference, “We wanted to get the guys in the huddle and get a play called. Yeah, we can look back and say it would’ve been nice to bleed a lot more time off the clock. Looking back on it, could we have burned more time off the clock? Yeah, but we had some personnel issues.

“We wanted to get a few other guys, a different personnel group in there, whatever it was and decided to call a timeout there and regroup and get back to the line of scrimmage. We felt like it was more important at that time to get back, get gathered, get a call in and get settled because we still needed the touchdown. We felt like they still had to go however far they had to go to get in field goal range and we can close it out.”  Chuck could have bled clock AND still called the timeout.

This question does not belong on the list because this morning is the exact right time to ask it.

8 – What will be the Colts biggest need to fill with a top 10 pick in the 2017 draft?  Derek Barnett of Tennessee is a game changing sack master and Marlon Humphrey of Alabama is a lock down corner.  Either would be an upgrade over the status quo, but are we really ready to talk about the draft?  And can any reasonable person assume yet that the Colts will fail their way to the upper third of the draft order?  If Matt Prater misses the 41-yarder at the end of the game, we are talking about a momentum changing game upon which the Colts could build a successful season.

7 – Is the 2016 draft class a bust like the the 2013 group?  This not only a premature question, it’s silly.  Ryan Kelly was mostly good yesterday.  T.J. Green did some nice work before spraining his knee.  Hassan Ridgeway and Antonio Morrison made a couple of plays.  UFA Josh Ferguson showed his ability to get yards after the catch.  The Colts loss was not caused by anything the 2016 draft class did or did not do.

6 – Does yesterday’s bad start equal bad coaching?  Because of similar circumstances throughout his run as the coach of the Colts, maybe it is time to question Pagano’s thought process early in games.  Again and again, the Colts refuse to do what they do best early in games.  I understand the desire to not overexpose that banged up defensive unit, but three and outs don’t help either.  The Colts offense is built to gain yardage in chunks.  Asking it to take smaller bites to help even the time of possession battle is evidence of overthinking.

5 – Is Andrew Luck finally fulfilling his promise?  Great first game of the season for Luck.  The bizarre departures from logic, occasional wayward throws, and desire to play physical football that have kept Luck from entering the elite level of quarterbacks occupied by Aaron Rogers, Tom Brady, and Drew Brees were missing yesterday.  That doesn’t mean they are gone forever.  Luck played a nearly perfect game, and the Colts still lost.  Good news.  Bad news.

4 – If Sio Moore is the best defensive player on the Colts, is this the NFL’s worst unit?  That question presupposes a number of facts not yet in evidence.  Moore tallied 13 tackles yesterday, but that doesn’t make him the Colts best defender.  After a single game, assessing the Colts defense as awful is premature, but potentially accurate.  There is no way to point to yesterday’s effort as reeking of high quality or limitless potential, but it’s one game of 16 for a unit that has injuries almost everywhere.

3 – If the Colts can’t win at home against the Lions after zero turnovers, special teams perfection, and Andrew Luck playing at the top of his game, when will they win?  If everything you thought needed to go right to win went right, and you still lose, is that a positive?  That’s a great question that is likely ringing in the heads of the Colts coaching staff.  Test #2 is coming up in six days, and we’ll have a fuller set of answers after that.

2 – How do I get a rebate for the unused portion of my season tickets?  Stop it!  Stop the madness.  Indy isn’t – or shouldn’t be – a bandwagon town. We’ve seen this before.  Back in 2008, the Colts started 3-4 and won the last nine to post a 12-4 record.  That season included an opening night 29-13 beatdown to a Chicago Bears team that finished the season 9-7.

1 – Is Ryan Grigson the right guy to build a winner in Indy?  Yesterday wasn’t the first day to ask that question, nor will it be the last, but waiting for the end of the season to conclude anything is both wise and humane.  The defensive secondary is riddled with injuries, and there are 15 games left in the season.  On the plus side for Grigson, the offensive line was pretty damn good yesterday – particularly in the second half.