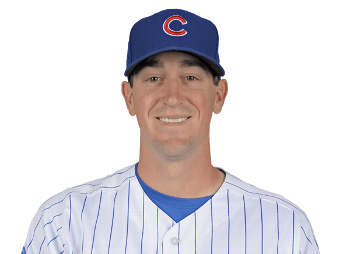 Kyle Hendricks doesn’t smile much. There are many great reasons to believe he’ll crack one after Game Three tonight.

Let’s overlook all the “first time since 1945” crap.  Been there, done that.  Not relevant to the proceedings tonight.

Game three will be decided on the field, not in the hearts of Cubs or Indians fans.

No positional matchup will compare in importance to that of the starting pitchers.

Kyle Hendricks will deal for the Cubs.  He’s coming off a superb performance against the Los Angeles Dodgers that put the Cubs in this position.  Josh Tomlin is on the mound for the Indians.  He hasn’t pitched in two weeks.

The weather will be a big deal tonight as the wind is forecast to be blowing out to left at between 16-18 mph.  For reasons that will soon be clear, this is very good for the Cubs.

Here is a brief breakdown of Hendricks and Tomlin

Hendricks is a ground ball machine (51%) who relies upon a mastery of location and movement rather than velocity to attack the weaknesses of opposing hitters.

His ERA of 2.13 led the majors, but he was significantly better at Wrigley with an ERA of 1.32, a WHIP of 0.86, and an opponents’ OBP (sum of on base percentage and slugging percentage) of .517.  Hendricks allowed only four home runs at Wrigley this season.

Tomlin is a similar pitcher with different tendencies and results.  The righty is an even more pronounced soft-tosser than Hendricks.  He will provide the Cubs with a great excuse to start a lineup of right handed bombers (see below) ready to take advantage of the wind at Wrigley.

Interestingly (only to me), Tomlin coached exactly the same number of ground balls (252) during the 2016 season as Hendricks, but allowed an additional 62 line drives or fly balls.  This will not be a great night for a pitcher to allow hitters to get under the ball – particularly a Cubs lineup that has been unable to bang in the postseason in the same measure they did in the regular 162 games.

Tomlin led the American League in walks per nine innings at 1.035, but was second worse in allowing home runs with a robust 36.  Three of his 30 starts began with a leadoff home run.

Despite being right handed himself, Tomlin is weak against righties, allowing a .299 batting average and .845 OPS.  Against lefties, he fares better with a batting average against of .229 and OPS of .685.  He is worse during night games than day games, as he has allowed an .800 OPS and 4.62 ERA after dark.

Tomlin made a change late in the season and playoffs as he became more reliant on his curve ball than fastball.  Addison Russell, Javy Baez, and Anthony Rizzo have not been good against breaking pitches that season, while Dexter Fowler, Ben Zobrist, and Kris Bryant have raked.

If Tomlin can’t consistently keep pitches in the bottom of the strike zone, it will be a quick night for him and a joyous one for the Cubs fans who’ve been waiting for this night for 71 years.

The Cubs are favored in this game +200, as you would expect for a game featuring a Cy Young Award candidate, and a 32-year-old guy barely clinging to a roster spot two months ago.

Should be a fun night on the north side.