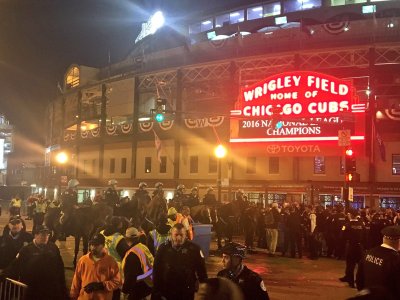 One way or another, the Cubs run to whatever this will be is going to be over in roughly 12 hours.

What will we obsess about?  What memories that have been so fresh over the last month will recess again into our deep subconscious?  What excuses will we find to remain connected for just a little while longer?

Will friendships that began in this lovely, incredible, most grace-filled October (and now November) – or reconnected – continue through the rest of the Fall and beyond?

The City of Chicago will return to being the City that Works, instead of being the city that loves the Cubs and one another.  Transplanted Chicagoans will have one less excuse to pick up the phone and talk to friends and family.

Win or lose, this ride has been thoroughly magical.  The Cubs delivered on dreams that not long ago seemed cursed to remain forever unfulfilled.

if the Cubs find a way to be the first team since the Pittsburgh Pirates in 1979 to win a World Championship on the road after trailing three games to one, all that 1908 and 1945 stuff will cease to be relevant.  The memories of fathers and sons, mothers and daughters, friends taking the train as eight graders to see Dave Kingman blast towering home runs, and families reveling in the too infrequent successes and being wizened by the thousands of Wrigley Field reminders that life is not always fair, will still inform each of us.

And if the Cubs lose, life will go on as it always has for fans who might just be satisfied with this taste of validated hope and excellence.

With a Cubs win, fans will experience a euphoria they will hold tight forever.  If they lose, this has been a hell of ride where loving hugs were shared among strangers, tears were shed over those unable to enjoy these moments, and a young nucleus of outstanding players will inspire a renewed and uniquely valid brand of hope for fans who remain committed to shedding an image as fan of “lovable losers”.

We will obsess about this magnificent game seven all day wondering whether Hendricks can remain the perfect stoic warrior on the mound, if the Cubs bats can continue to hammer Indians pitching as they did last night, and whether Maddon went to Chapman unnecessarily last night.

This will be the longest day for Cubs fans, and it will be followed by the longest night.

Happy or sad, this night will be the end of something many of us believed we would never see or enjoy.

We have done both, and it has been everything we promised ourselves it would be.  That should be enough.

It isn’t, so let’s go kick the Indians in the goddamned mouth and let’s figure out what winning a World Championship feels like!

2 thoughts on “Game Seven – For Cubs fans, this is the longest day – to be followed by the longest night”