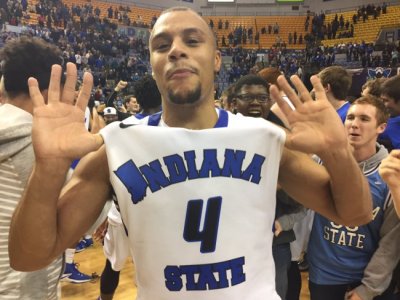 Brenton Scott proved to himself last night that he can play with the Butler’s of the college hoops world.

No offense to Indiana or Butler (both programs I love), but how much fun was it to watch Fort Wayne and Indiana State beat their more talented and better-known in-state rivals?

It was great theater in front of fans in Fort Wayne and Terre Haute who lie awake at night dreaming of beating the media darlings from central Indiana.

For the favorites, those two games were miserable experiences that might negatively impact NCAA Tournament seeding as both the Hoosiers and Bulldogs look ahead to a successful run in March.

You can bet that as the clock hit zero, both Indiana’s Tom Crean and Butler’s Chris Holtmann silently cussed their respective athletic directors for scheduling a road game against an in-state opponent that would see the visit as a massive chance for validation and redemption.

Every player for Fort Wayne and Indiana State would have jumped at the chance to play for either Indiana or Butler, but for some reason – athletic liabilities, lack of length, behavioral inconsistencies, academic lapses, or some other slight disadvantage – those schools never offered the chance.

Motivation to prove someone wrong can coax a special performance out of a young man for 40 minutes, and there were plenty of those in both in-state upsets.

The easy way for programs like IU and Butler to avoid such ignominious losses is to refuse to schedule in-state road games.  The tough way is to beat these teams when they are at their best as they strive to prove to themselves how worthy of wearing the candy stripes or working out daily at historic Hinkle Fieldhouse.

And what about the coaches?  While Tom Crean is paid more than $3-million per year and Chris Holtmann likely earns close to half that, Indiana State’s Greg Lansing has a base salary and bonus for media appearances of $249K and Fort Wayne’s Jon Coffman is likely paid significantly less than Lansing.  You think Lansing and Coffman didn’t enjoy beating coaches who earn between five and 20 times their income?

But none of that stuff really matters.  Visits by IU and Butler excited an area in dire need of something to look forward to.  They made lesser hoops programs darlings on Sportscenter.  The travel for IU and Butler student-athletes was very manageable, while providing a very tough test.

Fans win.  Players win.  Indiana, where basketball flourishes to its borders, wins.  Athletic departments in need of an influx of cash through a handsome gate win.  Half the coaches win, and half lose.

Other than Crean, Holtmann, and their respective staffs, who stands to lose from these games being scheduled?

Let’s hope the selfish needs of coaches are never allowed to trump what is good for fans, players, and schools in a basketball crazy state.

While I would love to see a state tournament among Indiana’s 10 Division One hoops programs, I’ll settle for programs aggressively scheduling home and homes with their Indiana brethren.

If coaches don’t like it, they can either take a rare look at the big picture, or try to replace their income selling insurance.