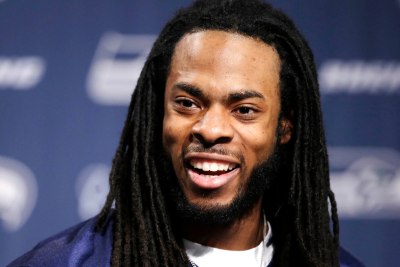 Richard Sherman makes people smile with his comments – especially himself.

Nothing beats honesty in a forum where you normally get relentless cliches.

Ask Seattle Seahawks defensive back Richard Sherman a question, and let the good times roll.  Sherman is not only honest; he’s fearless – and wildly entertaining.

You might not always agree with what he says, but virtually everything he says elicits a response.  When Sherman’s football career ends, there will be a seat awaiting him at whatever network is willing to provide him with the most intriguing combination of cash and opportunity.

Today, Sherman was asked about his Seahawks playing on Thursday night.  He did not disappoint with his response.

“Poopfest. It’s terrible,” Sherman said. “We got home like 1 o’clock in the morning, something like that on Monday and then you’ve got to play again. Congratulations, NFL, you did it again. But they’ve been doing it all season, so I guess we’re the last ones to get the middle finger.”

Yes, Thursday Night Football is a poopfest.  I might have said “waste of time”, “exercise in futility”, “unwatchable”, or “brand killer”, but Sherman’s colorful description was exactly right.

The NFL might wince every time Sherman opens his mouth because they aren’t fans of unvarnished truth, but I love it – and him.

Asking the bodies of aging adults to engage in physical combat with only three days to recover and prepare leads to a product unworthy of the NFL Shield, regardless of the tariff paid by the networks that carry the games.

As a result, all those associated with the game suffer – except for those in the media lucky enough to ask Sherman about it.

They grin as they get the quote of the week.