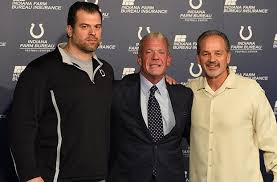 It appears there won’t be a repeat of the awkward press conference of January, 2016, to announce 2017 will be same old, same old.

There must be something else – an unseen chapter – to reports that the Colts are going too retain Chuck Pagano as the head coach of the team for 2017.

And if Ryan Grigson returns as general manager, there is absolutely has to be a future Plan A that Colts owner Jim Irsay is currently unwilling to reveal.

After two consecutive 8-8 seasons in the worst division in the NFL, hope is in short supply both inside and outside the Colts offices on West 56th Street, and hope (as well as media cash) is the fuel that keeps revenue flowing into the coffers of pro sports franchises.

Mediocrity is the rule, not the exception after historically bad drafts and high-risk swings and misses with free agents that have left the Colts bereft of anything resembling championship level talent, and so keeping Grigson and Pagano would appear to guarantee more of the same – which is not good news for Colts fans.

Unless there is something being kept from us – a timeline being driven by the need of a former Colts icon to enjoy life a little bit before committing to the grind of running the franchise – to what do we look forward other than another bleak year.

Because the status quo is so repellent at this point, people are trying to make sense of the reports of Pagano and Grigson returning by concocting scenarios where Peyton Manning pulls a John Elway, who runs the Denver Broncos.

Manning must be a year away from being ready to do commit to do the same, right?

Maybe Manning will come back to Indy, and maybe not.  Maybe Irsay just sees something in Pagano and Grigson that fans and media don’t.  Maybe he has hope that this pedestrian duo can turn back the clock a couple of years, and make all that talk about the Horseshoe and a culture of chopping wood more than a punch line.

Fans are definitely victims if this report is true, but Pagano and Grigson might be the people who deserve the majority of our pity during the next year.

That both men have been promoted to their level of incompetence is a virtual certainty, and if another failed draft is executed, another batch of broken down free agents looking for one more payday are signed, and they limp to yet another 8-8 record, 2015 & 2016 will seem like joyous picnics.

We have taken a long look behind the Colts curtain and reject the concept of hope in the immediate future despite Andrew Luck’s competence and T.Y. Hilton’s statistical excellence.

There must be something more to Irsay’s reported endorsement of Pagano and a suspected similar embrace of Grigson, right?

2 thoughts on “Reports Colts bringing back Pagano (and Grigson?) must mean Manning a year away, right?”