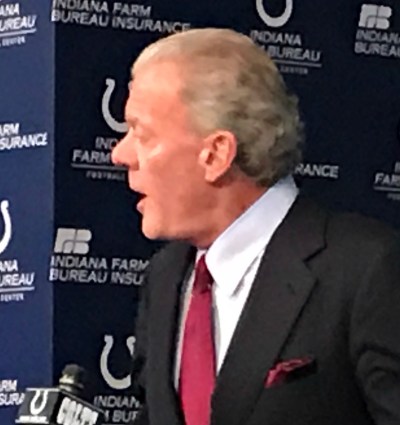 Colts owner Jim Irsay was on his game tonight as he announced a new architect will be sought for his franchise.

That was not the case tonight as he took only 20 minutes to explain his decision to fire general manager Ryan Grigson, retain Chuck Pagano, and state emphatically that Peyton Manning is not a candidate for the job.

There were no strange off ramps as he made the announcements and then fielded questions from as big a media contingent as could squeeze into the Colts media room.  He didn’t wander at all.  Straight and to the point communication was delivered by a guy with a well-earned reputation for something just a little bit different.

The only annoyance came early when Irsay explained that Grigson is a good man with six kids who worked tirelessly.

If Grigson lived like a hermit in a cave, ate only dates and grub worms, and slept in a lead lined coffin, he was still incapable of building a roster that could contend for a championship.

There are plenty of good men who work hard that get fired.  That’s life.  If Irsay needed to put on display his empathy for the guy he just gassed, he was talking to the wrong crowd.  Many of the media people in attendance have suffered the same fate as Grigson after doing their jobs at a much more impressive level.

The only measurement for Irsay – or media and fans – that should have mattered at all was whether Grigson could sift through the pre-draft workouts and reams of game film to find 7-10 football players capable of playing winning football, and then spending a bountiful war chest on similarly gifted veteran free agents.

After five years, Irsay concluded that a sixth go-round for Grigson would be more painful than the momentary ouch from telling a good man to pack his things.

Irsay got it right in firing Grigson, both in the decision-making process and the performance he executed earlier tonight.

Here is what we learned –

As for guesses as to who might be on Irsay’s list, it bears mention that the last GM he hired was a scout that peers could not believe got an interview.

Because Grigson was the anti-Polian, it’s reasonable to suspect that Irsay might bend in the opposite direction this time and hire the anti-Grigson – a guy who has done it before at a high level.

Whenever the hire is made, Irsay will have another chance to present a straight forward and cogent account of his decision-making process.

Today was a very good day for the Colts franchise as it jettisoned a mediocre-at-best GM, and put on display a very on-top-of-his-game owner.  Not sure which is a more important reason for hope.