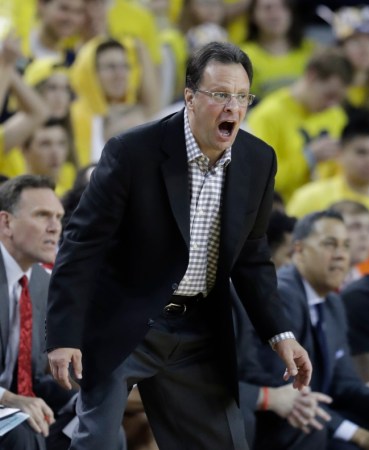 No amount of yelling by Tom Crean could rev the Hoosiers engine last night.

It happens to most teams – that night where a road team’s indifference meets a home team’s urgency.

It happened to Indiana last night.  The Hoosiers were terrible from tip to buzzer as Michigan rolled to a 30-point win.

IU’s defense was as horrific as ESPN’s Jim Calhoun’s analysis was indecipherable.  The Wolverines made more than 60% of their shots.  Hell, Indiana made more than half of theirs, and still lost by 30.  That’s how bad the Hoosiers defense was.

We could belabor the point by citing innumerable statistics that illustrate Indiana’s weak and unfocused defense – like Michigan’s outrageous 1.58 points per possession – but there is no point in that.  IU sucked.  They know it.  We know it.  Let’s not beat a dead horse.

The real story won’t be this lone evening of inanity, but the response to what is hopefully fleeting adversity.

If Indiana bounces back with a legit effort in Evanston Sunday night against Northwestern, they will have earned a split in a couple of road games, and the style points deducted for last night’s debacle will be forgiven.

It would have been nice if Indiana had shown up last night, but that they didn’t only robbed them of the ability to win a single game.

That’s okay – or it can be okay if the Hoosiers bounce back at Northwestern.

CBS Sports bracket expert Jerry Palm told me that Indiana will need a winning record the rest of the way if they are to earn a spot in the NCAA Tournament because their non conference strength of schedule is so poor.

Indiana is 6-6 in its last 12 games, which includes a couple of w’s against Delaware State and Austin Peay. To Palm’s point, IU is 6-7 in games against the RPI top 200, which causes their ranking by that flawed metric to tumble to 79th.

An large berth in the NCAA has never been bestowed to a team whose RPI rank is 70 or above.  That means IU needs more wins than losses, or it will be assigned a spot in the NIT.

That issue will be resolved by what Indiana does from this point forward, not what it caused last night with a mass malaise pandemic.

The season wasn’t lost last night.  It was only one game.  But if the defensive indifference that stretched the entire 40 minutes of play in Ann Arbor isn’t quickly replaced by aggressive activity at Northwestern, the Hoosiers season could quickly unspool.

Adversity happens in college, and students either learn to respond to it with tenacity or they shrink from it with resignation.

Indiana is about to do one or the other at Northwestern – a team fighting for its first ever NCAA Tournament appearance.

To the aggressor will go the spoils – as always.

One thought on “Yes, IU sucked against Michigan, but it only counts as one loss”