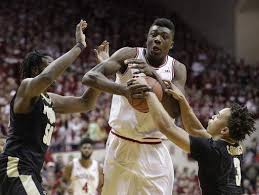 As Thomas Bryant fought for the ball last night, the Hoosiers will continue to battle for an invite to March Madness.

Indiana is not dead yet.

Last night’s loss to Purdue will not help the Hoosiers case with the NCAA Tournament Selection Committee, but it was not the last nail in their coffin.

Indiana is 5-7 in the Big Ten, losers of four of their last five after bowing out 69-64 to the Boilermakers at Simon Skjodt Assembly Hall, but don’t write them off completely.

Sure, stacking losses can’t help, but losing twice by five to ranked teams during the past five days shows the Hoosiers are still capable of playing well enough to compete against the top of the conference.

Against the top 200 teams as ranked by Ken Pomeroy and the RPI, Indiana has won only five of its last 14 games – hardly what anyone hoped for after wins against Kansas and North Carolina prompted visions of a Final Four appearance even among sane fans and media.

But past is not always prologue, and it doesn’t have to be for the Hoosiers.  Losses are disappointing, but Indiana still has a path to 9-9 in the Big Ten – which would likely kick open the door to the Big Dance.

Indiana’s remaining regular season schedule is no cake walk, but it isn’t a murderer’s row either.

It all begins with a Sunday matinee against Michigan at Assembly Hall.  KenPom gives IU a 60% chance of winning.  Michigan smoked IU in Ann Arbor by 30 a couple of weeks ago, but things may be different in Bloomington.  A win Sunday lifts Indiana’s conference record to 6-7.

Next Wednesday, IU travels to St. Paul to play Minnesota.  The Golden Gophers have lost five of seven and are reeling a bit.  Winning at Minnesota is always tough, but Indiana is certainly capable posting a w.

After a weekend off, IU heads to Iowa City for a game that is basically a pick ’em.  Peter Jok can play, but the rest of the Hawkeyes are young and average.  Let’s say IU splits against Iowa and Minnesota.  That lifts the Hoosiers to 7-8.

Next up is Northwestern at Assembly Hall.  I don’t care that Northwestern is no longer the conference doormat, Indiana beats the Wildcats at home.  Now, the Hoosiers are 8-8.

Two road games wrap up the regular season.  First comes a trip to Mackey for a rematch against Purdue.  That’s followed by a finale in Columbus against Ohio State.  I don’t see IU beating Purdue at their place, so this season could come down to the Ohio State game for a chance at 9-9 – the threshold necessary for IU to earn a spot in the field of 68.

Is all of this likely to happen?  Of course not, but there is a legitimate chance it can.

Last night didn’t end the season for the Hoosiers.  It just made the road to success a lot trickier to negotiate, and removed all allowance for a bad night.

February 10th is not the date to lose hope, regardless of who you root for.  There is plenty of time for that, if you tend to be a glass half empty type of fan.

IU is going to get healthier, and for all the faults of Tom Crean led Indiana teams (turnovers, fundamental lapses, and occasional confusion), they have always played hard to the wire.

Losing your mind today is always an option, but waiting for the final buzzer on this currently disappointing season seems fairer to the players, who continue to bust ass – and at least a little bit more fun.