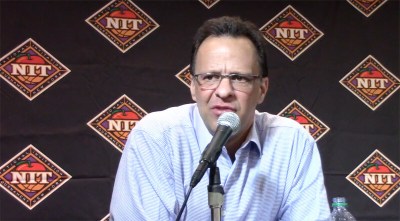 Tom Crean did some good work at Indiana, and now it’s time for someone else to take the program to another level.

“The Program is in great shape – the team’s gotta improve.” Tom Crean, March 14, 2017, after losing to Georgia Tech in the opening round of the NIT.

That quote should be stitched onto a banner and presented to Crean as he leaves Simon Skjodt Assembly Hall for the final time – which I’m guessing will happen later this week.

It’s emblematic of the confusion and illogic that has been been obvious within the basketball program on the floor and off for a good portion of these last nine years.

I listen to Crean last night, and then re-listened to see if maybe I missed something.  I often do that with Crean press conferences, but with the same result each time.  “The Program is in great shape – the team’s gotta improve.”  Nope, it is as nonsensical as I write it this morning as it was last night  His comments makes no more sense as the words run through my brain a second, third, and fourth time.

The players, I’m guessing, feel much the same way.  At least their on court behavior seems to convey the same bewilderment I feel.

Crean also mentioned the two Big 10 regular season championships “in four years”, which is technically true, but they weren’t during the most recent four years.  From 2014-2017, Indiana has won one championship, and in the other three seasons finished 7-11, 9-9, and 7-11.  During that four year run, IU has gone to two NCAA Tournaments with a 2-2 record.

If a 38-34 Big 10 record over the last four years indicates “The Program is in great shape – the team’s gotta improve,”, then someone must have redefined priorities and expectations for Indiana Basketball.

The program will lose, I have been told, Thomas Bryant, O.G. Anunoby, and James Blackmon Jr. They will be replaced by three recruits (maybe more if others leave) who have been evaluated as long term contributors – not immediate impact players.

That means the IU hoops will likely bring more of the same next year.

Indiana finished this season 18-16, 7-11, and lost in the first round of the NIT after foregoing the ignominy of hosting that contest against Georgia Tech because the lack of a crowd would be a longterm embarrassment to the Indiana Basketball brand.

So “The Program is in great shape – the team’s gotta improve”?.

Of course, it isn’t, and nine years into Crean’s tenure as the architect, builder, and supervisor of Indiana Basketball, it’s time for the powers that be at Indiana University to come to the unpleasant but obvious conclusion that the IU hoops brand can stand no more of the mediocrity, confusion, and convolution that Crean has wrought.

I’m going to skip all the claptrap about Crean the man, Crean the father, Crean the doer of good deeds, and all the other “I like Tom Crean” nonsense that accompanies anything written about him.  He may be all of those things.  I hope he is.  But the Tom Crean we need to discuss is the Tom Crean who is employed as the coach at Indiana.  He’s paid to win honorably while overseeing a positive educational experience for the student-athletes who pledge their trough to Indiana.

And win is something Crean has not done at the level necessary to keep his job.

He cannot recruit Indiana anymore.  His defense cannot stop opponents.  His offense does not value the ball.  His teams cannot consistently compete in the Big 10.

And he explains it away with nonsensical blather. “The Program is in great shape – the team’s gotta improve.”.

Firing Tom Crean – or smiling broadly as another program sees his many positive traits and “lures” him away from Bloomington – is the only step to re-engage a fanbase so apparently disenfranchised that showing up for meaningful weekend Big 10 games against Michigan and Northwestern was too much to bear.  An entire balcony was empty for both events.

Indiana fans are patient, but years of fundamentally bereft basketball has left them with no choice but to avoid Assembly Hall on a nice February or March day.

Replating is always an unpleasant choice, but it has become necessary as Indiana has become a run of the mill, mediocre, .500 team in a conference it used to dominate.

If Wisconsin can finish in the top four of the Big 10 every year since the turn of the century, is it too much to ask that Indiana do the same thing in more than one of the last four?

Who should replace Crean as the coach at IU is a conversation for another day.  That he should be replaced is a conclusion that can no longer be avoided.