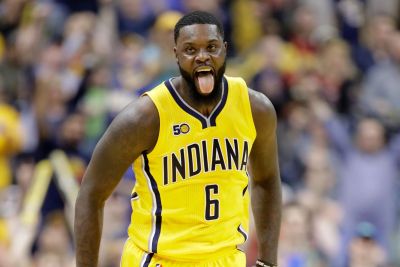 Lance is back – and he’s brought a lot a fun with him.

Sometimes the monotony gets to be too much in the NBA.

Eighty-two games with the same steady eddies can make an NBA team appear dull and uninspired.  Through 76 games, the Indiana Pacers were as lifeless as a stagnant pond.

And then Lance Stephenson came home.

A wake up call was provided to the Indiana Pacers last week as the mercurial Lance was signed for the remainder of this season, plus at least two more.

You remember Lance.  His antics sometimes overshadowed his basketball brilliance during his first go-round with the team (2010-2014).  His penchant for filching rebounds from teammate Roy Hibbert infuriated the big man, but amused fans who loved to watch him stat stuff hoping to lead the NBA in triple-doubles.

Lance decided that it was in his best interest three years ago to spurn the Pacers offer of five years/$44-million for the Charlotte Hornets and their two-years/$18-million guaranteed.  Financial wisdom must skip a generation – or two.

Since then, Lance has bounced all over the NBA map after crapping out with the Hornets prior to making his oddly triumphant return last night to the city where fans understand (kind of) and embrace (completely) him.

The Pacers trailed by 19 in the first half last night before rallying to beat a very good Toronto Raptors team 108-90.  Lance’s overt enthusiasm drove the spirited comeback, and nearly caused a brawl with less than four-seconds left.

With the game well in hand, the Pacers looked to end the game with possession of the ball until Paul George made a pass to Lance, who was in a position to attack the basket.  The prudent move would have been to obey the long-standing unwritten rule that a team with a sizable lead dribble out the ball once the shot clock is off.

One word that has never been used to describe Lance is prudent.

Lance took a couple of dribbles and laid the ball in the basket in a most dismissive manner.  The Raptors went crazy.  Fans at Bankers Life Fieldhouse laughed and cheered.  And just like that, this moribund Pacers team thought to be without hope for any postseason success had a heartbeat.

I’ve often said, you don’t invite crazy to your party.  It’s fun for awhile, but then the house burns down.

With Lance, the fleeting fun of having him back has re-energized the team, fans, and city.  Maybe in the end, signing Lance will be the boondoggle many expected, but right now he has made the Indiana Pacers a fun team to watch and play for.