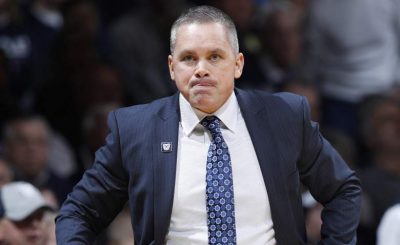 Chris Holtmann made the right call for he and his family, but I would leave Butler for a precious few coaching jobs (Ohio State would not be among them).

I would never write (or think) that Chris Holtmann made a mistake leaving Butler University to become the head basketball coach at Ohio State.

All of us have a unique set of priorities, and mine do not reflect a preoccupation with sick wealth.  I’m not averse to making a significant amount of cash, but quality of life is not driven by a quantity of cash – once I’m already earning more than $1-million per year.

For those who want more cash, more power to you.  Some millionaires want to be billionaires – in fact, most do.  I would be very happy with a couple of million in the bank.  If you don’t believe me, send me a check and watch me invest it oh so carefully, rather than try to double it every six months.

Given my non-cash-driven priorities, I believe Butler boasts a basketball job I would place in the top 10 of all basketball coaching positions.

Here are seven reasons the Butler job is among the nation’s 10 best:

7 – Hinkle Fieldhouse is in a livable neighborhood.  Walking to work is attractive to me.

6 – Living in Indianapolis.  Cheap, friendly, and easy, life in central Indiana is not dramatic or unpleasant.  It is easy not to be annoyed here, and I’m easily annoyed.

5 – Salary.  Anything over a million bucks per year is stoopid money.  There is virtually no lifestyle upgrade available by earning another million or two.  Mo’ money = mo’ problems.

4 – AD had your job and understands it.  Barry Collier was the coach who led Butler from obscurity to national relevance.  He has a realistic set of expectations for the position because he held it.  Empathy in a boss is a nice perk.

1 – A positive and specific culture is already built.  The heavy lifting has already been done.  People, including recruits already know what Butler is and who fits.  The program sells itself to those who should be there.

Call me an idiot if you like, but I’m an idiot who spends a lot of time smiling, laughing, hugging, and loving.