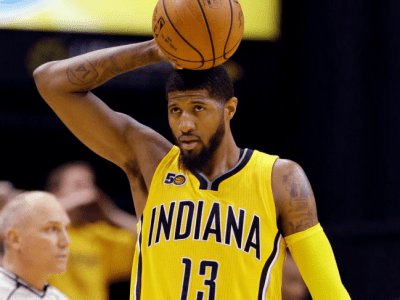 Paul George might still bring a championship to Indy through what is acquire for him in a trade today.

The Indiana Pacers need to look realistically at the landscape of the NBA and understand that winning a championship in the next three seasons is a physical impossibility.  It cannot be done by the Pacers – or any of the NBA teams not the Golden State Warriors, Cleveland Cavaliers, Boston Celtics, and Los Angeles Lakers.

The Warriors and Cavs are the current beasts, the Celtics are solid and have a ton of first round picks in the next three drafts, and the Lakers appear to be what’s next for soon-to-be free agent LeBron James.

Because of the that, the Pacers need to marshal all resources toward building a beast for four years from now, when LeBron gets creaky, and the Warriors likely unravel.

That includes using every draft pick to select the player with the best potential, not immediate impact.  That also means using assets like Paul George to build a stash of future considerations that might be used to acquire the kind of generation player necessary to win a championship.

Since 1980, only one NBA Championship has been won by a team without at least a borderline top 25 all-time player, and the Pacers have never had one of those on its roster.  That anomaly was the 2004 Detroit Pistons with Chauncey Billups, Ben and Rasheed Wallace, Rip Hamilton, and Teyshaun Prince.  Replicating their good fortune appears a long shot.

Getting one of those in the draft requires luck, and luck is enhanced by tonnage.  The Pacers need first round picks, and the higher they are in the draft, the better.

The Pacers have not enjoyed a selection in the top nine, since 1989 (#7 – George McCloud).  They did trade for the fifth overall pick in 1999 (Jonathan Bender), but the lack of top end picks has virtually sealed the Pacers fate as a franchise that has occupied the very top tier of non-championship contenders for more than a generation.

That’s not good enough, and dealing George for an egg that might become a dove is a mandate for crashing through the very high ceiling that separates the good from great.