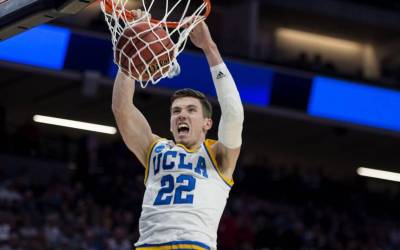 TJ Leaf can flat out play offensive basketball. Pacers fans should focus on that right now.

A Leaf blew into Indianapolis during the first round of the NBA Draft as though it’s already Autumn, and time for training camp to start.

T.J. Leaf will return to his family’s hometown as he begins what Pacers fans hope is a long and prosperous career.

There are some good to great things about T.J. Leaf that I’m trying to focus tonight when there was so much optimism we would see the Indiana Pacers take at least one significant step toward rebuilding.

My memories of Leaf are on the defensive end of the court last season for UCLA and during an AAU tournament in Fishers where his team from Southern California stood passively in a 2-3 zone and allowed opposition to exert their will offensively.

Judging a high school age basketball player’s defensive ability based upon performance in an AAU tournament is as silly as deciding to marry the first woman you meet in a bar at two in the morning.  A little more study is required.

With Paul George, Jeff Teague, Monte Ellis, CJ Miles, Aaron Brooks, and Al Jefferson either gone or almost certainly gone, the Pacers need a lot of pieces to cobble together a team, and Leaf is a piece who will be a scorer in the NBA.

The rest of the pieces are anyone’s guess as the Pacers failed to deal George as many expected tonight, and so fans will have to wait to see what comes in return for the all-star.

Trust comes hard on draft night for Pacers fans during years not divisible by five.  In 2005, 2010, and 2015, the Pacers hit home runs in the first round with Danny Granger, Paul George, and Myles Turner.  In the intervening years, the Pacers swung and missed or traded picks.  Tyler Hansbrough and Miles Plumlee stand out as errors, while the 2011 draft night trade of Kawhi Leonard for George Hill is especially regrettable.

These nights get long, and when potential for greatness exists, the reality of T.J. Leaf as the new hope for the Pacers future tempts cynicism.

I’m choosing to resist it, and certainly reject the notion that Leaf is somehow to blame for being the choice.

If the defense doesn’t come right away, revel in the offensive fun Leaf brings to Bankers Life Fieldhouse.