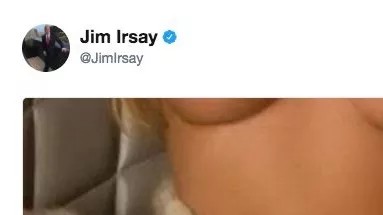 This is the only part of the pic on Jim Irsay’s Twitter feed we feel comfortable displaying here.

Jim Irsay lives a good life as the owner of the Indianapolis Colts.

He has virtually limitless wealth, which allows for access to all kinds of fun you and I don’t even know exists.

Best of all, Irsay is completely unbound by consequences that keep you and I on the straight and narrow.

Irsay has no fear of losing his job as he sits at the top of the pyramid.  Drug issues, odd comments, strange hires, and bizarre rants have dotted his 20 years as the owner of the Colts.

Let’s not forget that Irsay also gives piles of money to charity, fights back pain that would keep most of us in bed, and built a team that won a Super Bowl.  The embarrassing is far outweighed by the good.

As owner, Irsay is bound by only his sense of decorum and fear of shame.  More often than not, Irsay wins the day despite a total lack of fear of ever losing his job.

Last night, Irsay’s latest indiscretion was unveiled for his 427,000 Twitter followers.  A totally nude woman suddenly appeared on his feed, and vanished nearly as quickly.  Maybe Irsay’s account was hacked.  Maybe he pressed the wrong button while trying to share the pic with a friend via text.  Maybe Irsay thought his followers would enjoy gazing at a nude woman.  With Irsay, anything is possible because nothing is professionally punished.

Let’s back up a minute though.  What kind of life would you live if you had a couple of billion dollars and no chance to spend so much you would ever run out?  Everything you need would be at your fingertips, and that means everything your coterie of groupies needed would be supplied in bulk as well.

I’m guessing the tweet of a nude photo would not sit high on your list of daily idiotic lapses, or those authored by the happy wanderers who attach themselves to you like barnacles to the hull of your 150-foot yacht.

All things considered, a day without Irsay doing something publicly awkward is a victory, and who really gives a damn about a naked lady showing up on 427,000 Twitter feeds?

For those who seek reasons to be offended by irsay, the supply is a consistent trickle..

I celebrate Irsay’s victories rather than castigate his lapses.  If I was offended, there is nothing I – or anyone else – could do about it anyway.

4 thoughts on “No such thing as a meaningful consequence to Colts owner Jim Irsay, so let’s lighten up”