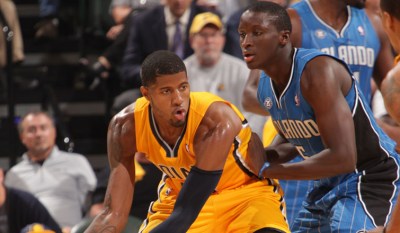 Which of these two play for the Pacers or Thunder just doesn’t matter, and the NBA is just fine with that.

Fans in OKC are thrilled, and all but the delusional in Indiana are deflated.

The truth is that neither set of fans should be cranked or despondent because it really doesn’t make any difference.  Paul George might help the Thunder win a couple more games, and Oladipo will sell a ton of jerseys because Indiana University basketball fans still love him.

There was no move available for either team that would make them relevant in any discussion about winning an NBA Championship any time soon.  The Golden State Warriors and Cleveland Cavaliers will play in the 2018 NBA Finals – as they have the previous three years.

The Boston Celtics and San Antonio Spurs will likely lose in the conference finals.  The Pacers and Thunder will be among the remaining 26 teams that will work their asses off to sell tickets by proffering a vision of hope that is entirely baseless.

Cheerleaders and mascots will entertain, and the game night crew will do everything they can to make going to the arena as positive an experience is it can be.  That is what the teams can control.

What can’t be controlled is parity in the NBA.  Because of rules governing salary caps and player movement, the very best will attract the very best.  The result is the advent of the super teams that renders the NBA regular season meaningless, and there is nothing the Pacers or Thunder can do to prevent it.

This morning, realistic Pacers fans are asking one another, “Does Kevin Pritchard even want to win?  How does Paul George only bring back a middling shooting guard and a guy who would be selected in the 20s (at best) if the 2016 draft was held today?”

The answer is – of course, Pritchard wants to win.  And so do Larry Bird, Donnie Walsh, Ryan Carr, Peter Dinwiddie, and the new guy Chad Buchanan.  But they can’t.  There is no basketball calculus that will allow the Pacers to compete for a championship.  None.

That’s right, the Indiana Pacers have 0.0% chance to ever win an NBA Championship, minus a complete and total change of the rules of player acquisition and retention.  A hard cap would need to be implemented, and there is no chance of that happening – ever.

The horses have left the barn and scattered to the four corners of the earth where the NBA continues to become an exceptionally valuable global brand.

And so the Pacers will continue to wander through mediocrity, and so will the Thunder because they don’t have the stomach to play the high stakes game of sucking for years in the hopes of snagging the next LeBron or combination of Steph, Klay, and Draymond.

If being bad automatically led to being great, everyone would do it.  More often than not being bad leads to being worse.  It’s a high stakes game of craps where the dice are loaded against the shooter, but it’s the only way for teams like the Pacers and Thunder to win at a meaningful level.

The Pacers have chosen to be as good as they can be from year to year, and so have the Thunder.  That wears on stars like Kevin Durant and players trying very hard to be stars – like George.  They go somewhere else to join a super team rather than hope one will be built around them.

And so it goes.  And so it shall always go.

Pacers and Thunder fans deserve better, but like Clint Eastwood’s William Munny says in Unforgiven, “Deserve’s got nothin’ to do with it.”