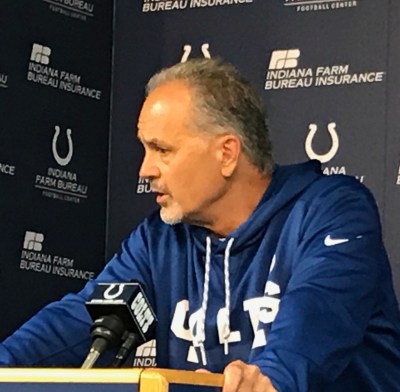 Chuck Pagano’s days behind that podium at the Colts offices are numbered.

There is no path through this regular season for the Indianapolis Colts that leads to a seventh season with Chuck Pagano as head coach.

Pagano is a certain goner.  The Colts enjoyed an ascension with Pagano as coach from 2012-2014, and then came a decline which has gathered significant steam during the first seven weeks of the 2017 season.

Six seasons as a head coach in the NFL is a good run – a really good run.  Pagano is living his dream and stashing away piles of cash much higher than he could have dreamed when he began his career as a graduate assistant at USC just over 30 years ago.

Maybe his ultimate goal was to win a Super Bowl, stand at the podium on the 50-yard-line, and accept the Lombardi Trophy from commissioner Roger Goodell.  That moment will not be his, but that doesn’t mean he’s a washout.

The moment he is relieved of his duties will come during the next three months – maybe sooner rather than later – and it will be miserable.  Walking out of a building filled with people he led will be unpleasant.  There is no way for Pagano to do it without seeing himself as a loser.

People will offer condolences and try to make Pagano feel better, but he won’t.  He’ll go through the stages of grief, and have a gnawing feeling that he has failed his family and those he led.  Pagano will be pissed off at his bosses who didn’t understand how his hard work yielded success.

Then Pagano will wake up one day, $9-million dollars from the Indianapolis Colts will have posted in his checking account, and he’ll decide that life could be a hell of a lot worse.

He’ll remember that it was because Jim Caldwell got fired that he became the coach of the Colts, and someone else will get that opportunity because of his dismissal.

Because Pagano will leave with a winning record and have the get out of jail free card issued because of Andrew Luck’s injury, his phone will ring, and someone will offer him another shot much in the same way the Lions came for Jim Caldwell.

That’s the circle of life for a coach.  Ascension, decline, demise, rebirth.  Repeat.

If the performance of the Indianapolis Colts against the Jacksonville Jaguars in yesterday’s 27-0 debacle is any indication, Pagano’s message is falling on deaf ears.  Fans can see it, and they responded yesterday by leaving Lucas Oil Stadium rather than booing, and that means indifference is seeping into the fanbase.

Indifference cannot be allowed to stand unchallenged.  Further losses will result in empty seats, and refilling them can be very difficult.

The Colts will not be a better football team immediately if Pagano is fired today, next Monday, or the Monday after that, but there will be a renewed sense of hope that will reinvigorate fan interest.  Assuming Andrew Luck returns healthy for 2018, his presence coupled with a new coach should boost season ticket renewals.

Pagano will be fine.  The Colts will be fine heading into year two of a near total rebuild.  Fans will be fine as they will have justification for hope and continued interest.

The timing will depend upon the Colts stomach for ripping off the bandage versus their stomach for gazing at empty seat backs.

But make no mistake, Pagano is a future former coach, and the train will leave the station at some point during the next 10 weeks.

Do not weep for Pagano.  He knows this game as well as he knows football – maybe better.

2 thoughts on “Colts Chuck Pagano will be fired – the sting will pass, everyone will be fine”