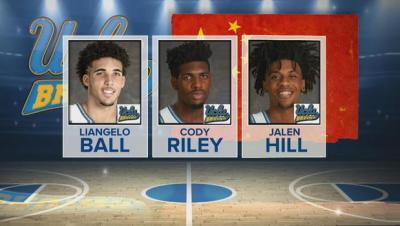 These three UCLA Bruins forgot the American laws do not govern the rest of the world.

Getting popped for shoplifting in China is no joke.

That should not be one of the lessons learned by UCLA freshmen as they travel to play basketball in that country thousands of miles away geographically, but far more distant culturally.

In America, most shoplifters are stopped, stripped of items they “forgot” to pay for, and maybe banned from the store.  In China, a guilty verdict can come with a three-to-ten year jail sentence.  And as you might guess, incarceration in China does not feature cable TV and conjugal visits.

Whether the accused players – LiAngelo Ball, Cody Riley, and Jalen Hill – are found guilty or not, their alleged idiocy should serve as a lesson to anyone who has not seen films like “Brokedown Palace” and “Midnight Express.”

After being released on bail, the three freshmen are required to remain at the hotel where the team was staying until the legal process concludes, which could drag on for weeks or months.

Here is a quick primer on how you – or your players – can avoid whatever inconvenient fate awaits Ball, Riley, and Hill:

5 – Never accept an offer to carry a package (especially anally) through a checkpoint.  Of course, this is the plot of the film “Brokedown Palace”.  It did not work out well for the character played by Claire Danes – or defendants on many “Law & Order” episodes.  Easy money is never that easy, and if it was easy the guy offering you cash would do it himself.

4 – Don’t be an asshole.  Treat a country you visit as you would the home of a friend.  Understand you are a guest, and familiarize yourself with its unique customs.  If you are responsible for the welfare of a group of travelers – as coach UCLA coach Steve Alford is for UCLA – make damn sure they understand the responsibilities of being a good guest.

3 – Say “yes sir!” a lot.  Agree with everything a man or woman wearing a badge says.  I am not normally compliant with broadly exercised authority – until I travel.  Generally, the weapons brandished by police at the airport of your destination will communicate the seriousness with which they enforce laws.  If you see automatic rifles, learn how to enthusiastically say “Yes, sir!” in that land.

2 – Be a courteous guest.  This is a more positive way to re-state #4.  Treat your hosts with respect.  The ugly American act does not play well anywhere.  Remember that you represent your country, and the behavior you exhibit will impact those who follow you.

1 – Know the laws and obey them.  Laws are mostly the same from place to place.  The punishments vary widely.  As we mentioned, the sentence for a first time shoplifter in China can run from three-to-ten years.  For a DWI, life can get complicated – fines, prison, and massive headaches being your hangover may await you.  In many countries, any trace of alcohol is enough to get you arrested.

Reasonable people will enjoy traveling abroad.  Ball, Riley, and Hill are accused of being bad guests, unreasonable travelers, and assholes.  They may spend much longer in China than they anticipated, and might just see part of China happily unseen by many Americans.

To read more about the fun the that potential awaits these three “kids being kids,” click here.

I wonder if Alford and his staff required the Bruins to do the rudimentary research I did over the last 15 minutes to write this post.  I doubt it.