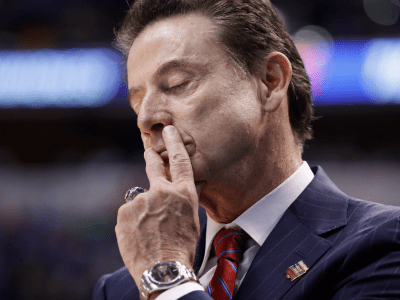 Rick Pitino might have been the most arrogant cheater in college hoops, but he isn’t the only one.

Smart college basketball experts like Jay Bilas and Fran Fraschilla have recently written treatises about how to cure college basketball.  The unfortunate truth that renders their well-intentioned thoughts unnecessary is that it isn’t sick.

Sadly, the problems identified by Bilas, Fraschilla, and others with skin in the game have been widely accepted and ignored facts of life for generations – at least for fans.  And it’s the fans who separate basketball from cross country by consuming it on TV and buying expensive tickets at giant arenas like the Yum! Center, Dean Dome, Rupp Arena, and Simon Skjodt Assembly Hall.

Here are the top five problems in college basketball and why they aren’t really problems at all:

5 – The NCAA sucks at enforcing its own rules.

While this is true that the NCAA is better at enacting high-minded rules than bringing meaningful consequences upon those who violate them, yelling at Mark Emmert and the enforcement staff of the NCAA does no good.  The NCAA is a member organization run by the very schools it needs to police.

That’s not such of a way to ensure fairness.  No, but it’s a hell of a good way to not kill a goose that drops enough golden eggs to make rich most coaches, administrators, and high-living NCAA honchos.

Of course, this tidy NBA rule was only about forestalling elite level players’ ability for earn a max contract for one year.  A prime year of productivity for a bargain price sounded sweet to owners, and the players association was cool with great players waiting a year to push old and mediocre players off rosters.  So the rule was adopted minus opposition.

The only argument for repealing the one-and-done rule has been that athletes should be allowed to enter the workforce of their profession at the time of their choosing once they are adults.  Now there is a new reason – NBA owned D-League franchises need stars to make the turnstiles spin.

That’s the reason it will be repealed.

Athletes being herded into classes that never meet is morally bankrupt – especially when an athlete’s compensation is limited to the value of the education they receive, but no one really cared when North Carolina had to answer NCAA charges of academic fraud.  They cared even less when no penalties were assessed.

North Carolina’s defense was the old, “It’s none of your bee’s wax whether our classes are a charade.”  It worked.  Thinking like a third grader is a brilliant strategy once in awhile for lawyers.

The reason this ship sailed by without causing a ripple from fans was that academic fraud has long been practiced by athletic departments.  Tutors complete work for athletes every day, as it always has been and so it will always be.

Some 18-year old heading to the NBA in eight months not likely to knuckle down and study about Sociology, Taoism, or Venn diagrams.  An academically challenged 18-22-year old talented enough to help Sterling University to a Final Four is going to be steered to rubber stamp classes – or at least classes that do not tax the intellect beyond it’s capacity.

2 – Athletes being sold to agents by assistant coaches

Chuck Person and three other assistant coaches have been indicted for allegedly accepting kickbacks for steering student-athletes to financial managers.

This has only happened since the first agent signed the first athlete.

Athletes trust coaches, coaches can be bought, agents buy the trust between an athlete and a coach.  It’s the transitive property at its most perverse and simple.

That scammage is so far above the head of the average fan and so far afield from their level of interest in college hoops that they now have difficulty recalling the story just six weeks after charges were filed.

Louisville cheated, and isn’t that terrible?  It’s so reprehensible that the Yum! Center will be filled to capacity again this season just like any other.

Family members of recruits have been paid forever.  Do you know why?  Because potential players have value, and in America, value is chased by money.  Always.  Did anyone really think that making cash compensation illegal by NCAA legislation would stop sacks of cash from finding takers in exchange for committing to a program?

Remember Sam Gilbert and Ed Martin?  They greased some palms to secure commitments at UCLA and Michigan.  You think they were outliers?  No chance.  Pitino got bounced, not because a recruit allegedly received $100K from Adidas to declare for the ‘Ville, but because he was so arrogant he arranged it himself, according to court documents.

Other coaches are smart enough to steer clear of transactional duties.

Have fans ever cared that any of this happened.  When “Blue Chips” was made, did fans boycott games because of the entirely believable payoffs to families?  Did Michigan fans abandon the Wolverines when news of Martin’s meddling surfaced?    Of course not.

Whether college basketball players are able to control the marketing of their own image or are paid salaries by the universities, the best of the best will continue to be able to profit through a shoe guy slipping cash to an uncle or a booster hooking a mom up with a sweet job.

Are you infuriated?  Does understanding amateurism is a lie rob you of joy?  Are you ready to march on the Indianapolis HQ of the NCAA to demand changes Bilas and Fraschilla advocate?  Of course not.  You just want to watch some basketball played by some young men with the name of your favorite school stitched onto the front of their jerseys.

It would be great if coaches, shoe companies, and the families of players didn’t step outside the rules to feather their own nests, but that isn’t the way the world works – even in the supposedly, wonderfully, magically decent and pure world of college basketball.